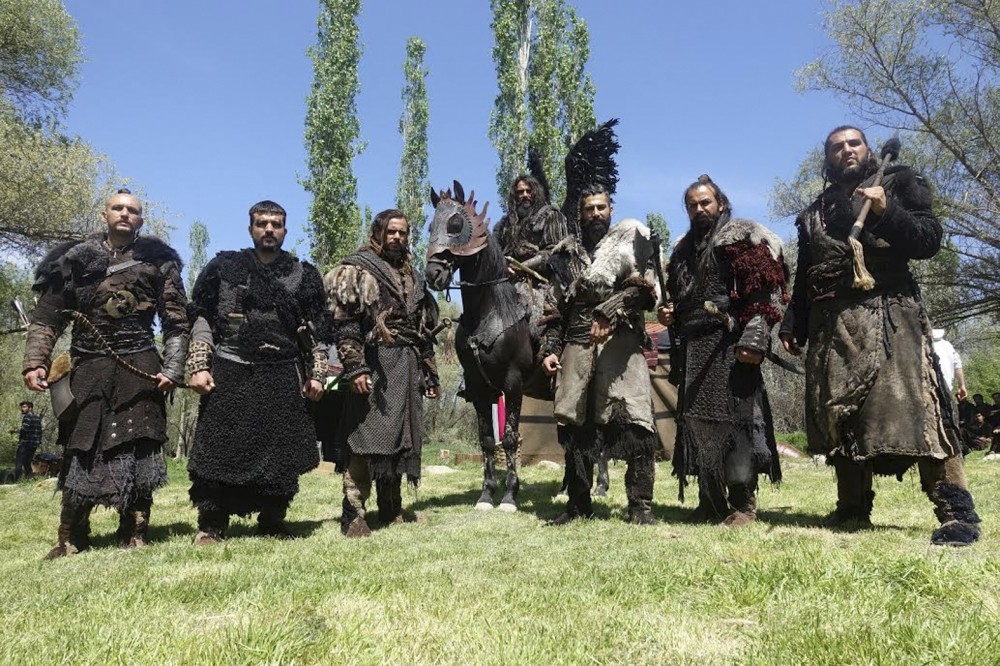 Consisting of seven people, the Deliler are sent to Targoviu015fte in Romania by Baba Sultan to execute Vlad III in the film.
by Anadolu Agency May 04, 2018 12:00 am

Deliler, a cavalry unit of the Ottoman army, has become the subject of a film that presents the conflict between Vlad III and Mehmed II

Deliler, meaning mad men, were the cavalries of the Ottoman Army, which shook the whole world. The story of these cavalries, which mainly acted as shock troops on the front lines by using guerrilla tactics, is being adapted into a film.

The shooting of the film, directed by Osman Kaya, is being completed in Aksaray province.

Producer Cem Uçan, who portrays Gökkurt, said he has been working on this project for eight years and that Deliler were the bravest Ottoman cavaliers and the first military unit that was imitated by others in the world.

Indicating he designed the project and adopted the general story, Uçan said, "This is a difficult project. It is the highest-budget film recently in Turkey. We are in Aksaray for seven weeks. We have one week left. Spectators will watch a visual show.

The story is perfect, as well. Our people think that foreigners shoot films such as "Game of Thrones" and "Vikings," and they are all perfect. Actually, we can do better. When spectators watch this movie, they will understand what I mean. It is an unbelievable visual show and perfect in the context of action. We shot very difficult scenes and experienced dangerous moments. For example, some accidents while we were riding horses occurred in Lake Tuz."

The story takes place in the period of Mehmed II, known as Mehmed the Conqueror.

Noting they made great efforts, Uçan continued: "When Hollywood produces such a film, we watch it very fondly. It is very proud for me that this film is a Turkish one, produced by a Turkish team and its producer is Turkish, as well. Our work is world class. The only thing that we need is the desire."

Remarking that Petekkaya played the role perfectly, Uçan said, "Spectators will see him in a different character than they are used to. He gave his spirit to this role."

He stressed that İsmail Filiz, who is in the lead role, had made great efforts in the project since the beginning, "Filiz didn't just act in the film, he contributed to the project as much as I did."

The film will debut simultaneously in Turkey and Europe.

"We do our best and do not have to compete with anybody. Our assertions should not be misunderstood. We speak on behalf of our country, not as actors or producers. I am very proud on behalf of Turkey that such a film was produced by Turks," Uçan said.

'We shoot every scene with excitement'

İsmail Filiz, who plays the leading role of Aşgar in the film, said Uçan realized his dream with this project. Filiz added: "When he first told me about the film, he was really excited like he is now. We always see his excitement during the shooting. We shared the same feelings with him. We shoot every scene with great excitement."

Saying the costumes are fantastic, Filiz said, "We shoot in perfect places. Some accidents happened in Ihlara Valley. However, we did not harm any creature. For example, the fur that we wear is not real. I am in the role of Aşgar. He is a soldier who has lost a close friend. The story starts with his trauma, and he creates his own story through a journey."

Moving to the U.S. a while ago, Demet Tuncer came to Turkey for the film. She plays the role of Roza.

"The story has not been handled in a film before and is very interesting. When I first came here, I watched the shooting without any editing. I was very proud because it was a great job. If I did not take part, I would be proud anyhow," Tuncer said.

Nur Fettahoğlu, who plays Alaca, also mentioned that the shooting continues properly, and they are very excited.

While Deliler are passing by the village of Alaca, they realize something is happening: Some of Vlad's gangs plunder the village. An ironsmith stands up to the gang and is killed; the gang surrounds his daughter Alaca, and Deliler save her. Alaca and a baby whose mother is killed join Deliler. They go to the castle of Vlad to execute him.