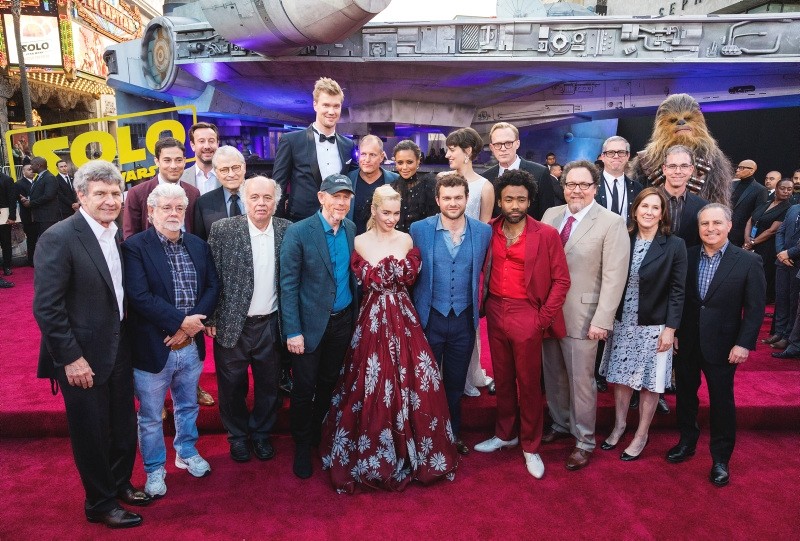 Lucasfilm brought the biggest party in the galaxy to Hollywood on Thursday as rapt devotees gathered under the Millennium Falcon for the world premiere of the latest "Star Wars" spin-off.

"Solo: A Star Wars Story," which gets its U.S. release on May 25, tells the coming-of-age tale of smuggler Han Solo before he was the galaxy's most adored scoundrel.

"One of my favorite movies growing up was 'Butch Cassidy and the Sundance Kid.' I think this movie has a little bit of the fun of that film," said Ehrenreich, who plays Solo, on the red carpet.

Hollywood's A-list -- "Star Wars" alumni or otherwise -- turned out for the second in the "anthology" series of spin-off films that started in 2016 with "Rogue One."

The Disney-owned Lucasfilm delighted fans in April with a sneak peak of one of the most hotly-anticipated scenes from the movie, the first meeting between the young Solo and Glover's Lando Calrissian.

"A very slow week, but hopefully it will speed up as soon this movie comes out," joked Glover, whose rap alter ego Childish Gambino has racked up a record-breaking 70 million YouTube views in just four days with his latest single "This is America"

Glover said the best thing about playing Lando was the fans, who began recognizing him as the galaxy's sexiest gambler the very day he was announced for the part, when he went for a pizza.

The trailers have also offered a glimpse of the pivotal moment in "Star Wars" lore when Han beats Lando in a card game to win the Millennium Falcon starship, a full-size version of which was constructed for the premiere.

"Everything about this movie is getting you ready for what you already know," said Emilia Clarke -- Daenerys Targaryen on HBO's "Game of Thrones" -- who plays Qi'ra, Solo's friend since childhood.

"And I think that the way that we get there is satisfying."

The movie, which comes just five months after "Star Wars: The Last Jedi," has endured a journey to screen that has been bumpier than the Falcon completing the Kessel Run.

The pair behind the acclaimed "The LEGO Movie" and "21 Jump Street," were dropped after clashing with Lucasfilm chief Kathleen Kennedy and writer Lawrence Kasdan, according to reports.

"This is showmanship at its best and it's what 'Star Wars' fans deserve, this kind of excitement. But I'm also really glad that we worked very hard to make this release date," said Howard.

"It was a big challenge. The movie was not compromised one bit and I'm so glad because it really feels like a summer movie to me."

"I just approached it as another adventure happening at a different time in Chewbacca's life," Suotamo said.

"It was interesting to approach this time when Chewbacca doesn't know Han, he doesn't know all these people, he's in a really bad spot and he's looking for a way out."

Experts are predicting an opening weekend domestic box office of around $137 million, some way short of the $155 million recouped by "Rogue One" and a figure dwarfed by Marvel twice already this year.