Admired for her poise, especially on the red carpet, and acclaimed by critics and film buffs alike, actress Cate Blanchett is a strong woman who takes a firm stance on the social and economic matters of women

A gifted performer who developed her talent at a young age, Cate Blanchett has grown into an exceptional actress who has achieved international acclaim with her stunning Oscar-nominated turn as young Elizabeth I in Shekhar Kapur's "Elizabeth" (1998). Prior to that role, the engaging Australian found herself thrust in the spotlight with her third feature, "Oscar and Lucinda" (1997), starring with Ralph Fiennes. As the headstrong proto-feminist heiress whose penchant for gambling drew her to a clergyman with the same predilections, Blanchett delivered a stunning performance that garnered the attention of filmdom's most esteemed directors in "Ocean's 8." Alluring yet elusive and possessing an innate intelligence coupled with malleable features - she sometimes seemed plain, but beautiful, often in the same shot - the actress quickly rose to international fame to become one of Hollywood's most respected and revered talents. 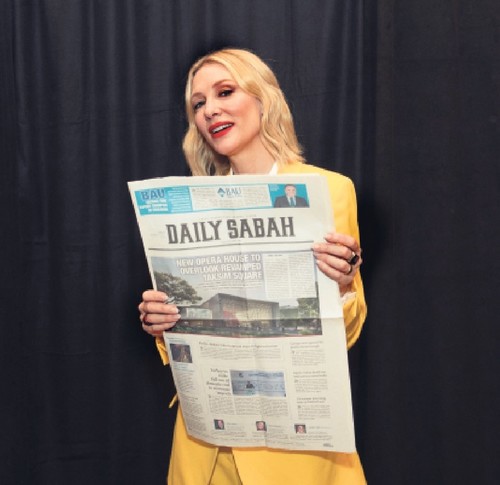 Daily Sabah conducted an interview with Blanchett on her acting career.

DAILY SABAH: While watching "Ocean 8," I kept wondering who decided on the number eight? Why not seven, nine or 10?

CATE BLANCHETT: I don't know. Guess it was Olivia Milch, the writer of the screenplay, who put out the pattern. I have no complaint with that. "Ocean's Twelve," they have done that already, haven't they? "Ocean's 8" is better than "Ocean's 4."

DS: In "Ocean 8," you plan on robbing the Met Gala. Would you make a good thief? And if you would steal anything, what would you steal?

BLANCHETT: Oh gosh! I would make a terrible thief. I have such guilt and shame about so much stuff. But my thing is that I go to the supermarket and that is when I want to start stealing stuff. It is apples and oranges and chocolate bars and cocoa powder and Altoids and little things like that. But I don't, I'm deeply, deeply honest; I'm an actor (laughs).

DS: How was it working with Rihanna and how do you see her upcoming acting career?

BLANCHETT: I think she's doing fine. It was great, she had her acting coach there. But she's one of the most fluid, easy, relaxed and natural performers that I've ever seen. And those eyes, I mean those eyes, you just look at her and your jaw would drop. So it was great.

DS: You were the leader of this amazing group of women who acted in the film. So I would like to ask you about leadership as you were just in the Cannes jury. Did you enjoy the job?

It was one of the greatest privileges of my life. I don't know if you should ask me if I'm a good leader or not, it's probably for the members of the jury. But it was one of the happiest and most fascinating experiences I have ever had. It was a privilege and a huge responsibility, but it's a democratic process. I think when you are in a great position of leadership, I think one of the strongest skills you can have is deep time listening. If you try to canvas everyone's opinion and make sure that everyone is heard, in the result of everyone's opinion on the jury is reflected. Khadja Nin, who was on the jury with me, said really wisely early on that we're not here to judge, we are here to choose. And that was a painful process. So, sometimes when you are in the leadership position, it's painful and a pickle. But it's a privilege and not one that I took lightly.

DS: Are you a strong leader or a do you compromise?

It's easy, I wake up and look like that. No hair and makeup, I do it all myself (laughs). What was great I have had a long creative relationship with a lot of designers, Mr. [Giorgio] Armani being one of them. I have probably said this fact a hundred times, my first check from my very first job, I bought an on-sale Armani suit which I still have. But what I really wanted to do in Cannes was wear all female designers. And I have worked in the theater and my sister is a designer, a theater designer, and of my best friends is a costume designer for theater and I love costumes. So, I love collaborating with designers and with Elizabeth Stuart, who is my longtime friend and stylist, and it's great. It is great to wear young emerging female designers when you have that platform. Being a woman who has a brain doesn't necessarily mean you don't like dressing up. I do it for a living.

DS: You have been at the forefront of the Time's Up movement. What are your hopes and expectations in how this movement will change Hollywood?

First and foremost, there is no forefront to this movement. It's a non-hierarchical inclusive movement that is rolling like a massive rolling stone, bigger than any of the individuals involved. I am in a very public industry, and when one stands up and says anything about anything outside one's lane, outside the lane of what you are wearing, you are open to criticism. But I think it's really important that if you have a platform as an industry as we do, artists are always moving into places first and they are the first people to buy up real estate in areas that no one wants to live in, and it's the same in the intellectual or political landscape and social landscape. But I feel that it's upon us to make the changes, the seismic changes we need to make in our industry, so that those changes can happen in other industries and less visible industries. Because there is not an industry I can think of where there is equal pay for equal work, or abuse as a power doesn't exist, for men and for women. And so equality is not a political issue, it's a humanitarian issue.

DS: I think in an interview you did before the Cannes Film Festival, you talked about a role you didn't take because there wasn't equal pay. Was that recent?

Relatively recently, yes. It happens all the time. Change is not going to happen overnight. I don't think women have to be patient, but we certainly have to know that profound changes, and sometimes it happens in a sweep, but lasting change, these things have to be set in stone. We just have to know that we are making progress, but it's not going to happen tomorrow. But I think it's important that in any industry where a woman is doing the same job as a man that they get enumerated equally, and it's not about greed. I have worked on films where I have been paid $10,000 and I have had to put that $10,000 right back into the film, because the film was about to fall over. I didn't get into the industry to make money, but if my co-stars are doing what I am, then I don't see why I shouldn't be paid the same.