Dystopian 'Sorry to Bother You' affirms vitality of black cinema

With its dystopian story of racial exploitation behind the veneer of modern America, "Sorry to Bother You," the first movie by the rapper Boots Riley, is showing the fresh vitality in African American cinema. 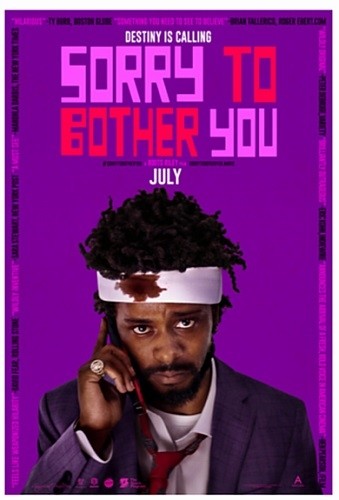 The movie, which hits US theaters on Friday, comes a year after the runaway success of "Get Out," the first feature film by Jordan Peele about a town of wealthy white people who conspire to implant themselves into African American bodies. "Sorry to Bother You," also made on a small budget, marks a new outlet for the militant voice of Riley, best known as the frontman of The Coup, the politically engaged and critically praised hip-hop group. With echoes of science-fiction classic "Metropolis," the film focuses on exploitation at a telemarketing firm, whose workers are crammed into the basement as executives work on floors above them in vast rooms bathed in light.

Separating them is an elevator, which becomes the setting for several comical scenes. The hero Cassius - played by Lakeith Stanfield, who also starred in "Get Out" - can only ascend in the elevator, and the symbolic social ladder, as he switches into a "white voice."

Much like "Get Out," set in a placid town where the villain is said to have voted for Barack Obama, "Sorry to Bother You" shines a light not on police brutality or other more obvious issues in Donald Trump's America but instead looks at racism in ostensibly safe confines. In "Sorry to Bother You," the CEO of fictitious corporation WorryFree reflects the worst traits of a Silicon Valley executive, a visionary who dreams of uber-workers who are half-human, half-horse.

Riley - the son of Chicago labor activists who has spent his life on the fringes of Silicon Valley in Oakland, California - searched for several years to find an audience for his screenplay. He first turned "Sorry to Bother You" into a 2012 album by The Coup which merged rap delivery with live orchestration.

The 47-year-old first-time director said it was an uphill battle to be taken seriously in film. It's "as difficult as it would be if your favorite saxophone player said he wanted to build your house. You are a musician with a script -- who wants to read that?" he told Agence France-Presse (AFP).

The film pays tribute to several social movements of recent years including Black Lives Matter and Occupy Wall Street, in which Riley was active.

It is too early to tell if "Sorry to Bother You," which won acclaim at the Sundance Film Festival in January, will see the same success as "Get Out" - let alone "Black Panther," the much-larger budget film from Marvel about an African super-hero that has quickly become one of the highest-grossing movies of all time.

But cast members are saluting the rise of such films as proof that, some 30 years after the breakthrough of Spike Lee's racial drama "Do the Right Thing," African American cinema is dynamic, original and nuanced.

Tessa Thompson, who plays Cassius' girlfriend Detroit in "Sorry to Bother You," voiced hope that more movies would follow, saying that black cinema's problem had never been a lack of talent.

"It really has to do with a lack of opportunity and a perceived lack of an audience. What you see with 'Get Out' is that there is an audience for it - and the audience, by the way, is not just black," said Thompson, whose previous films have included 2014's historical saga "Selma" and last year's action flick "Thor: Ragnarok."

Stanfield said that African American films were showing they can be "imaginative and crazy" - and also simply fun.

"You don't have to come see us talk about our place in America and cry all the time," he said. "You can leave the theater feeling hopeful, like this film makes me feel, and still talk about the deep things that affect us every day."