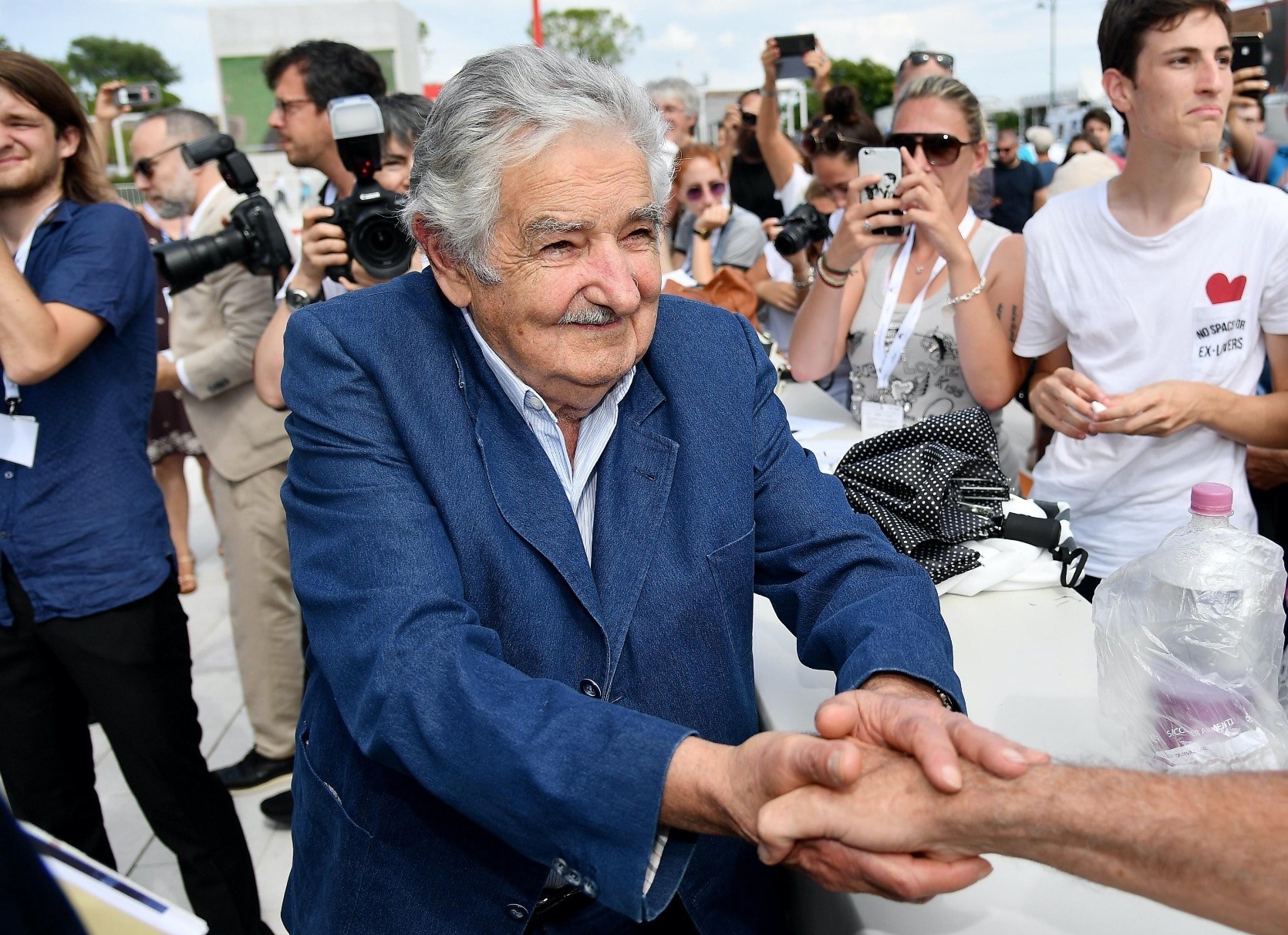 Former Uruguayan President Jose Mujica signs autographs and shakes hands of fans as he arrives for the premiere of u2018El Pepe, Una Vida Suprema.u201d
by Sep 06, 2018 12:00 am

He is 83 and was never exactly movie star material, but Jose "Pepe" Mujica, the former president of Uruguay, is the undisputed star of the Venice film festival.

"El Pepe" - dubbed "the world's humblest head of state" for giving away 90 percent of his salary to good causes - is the hero of two films, attracting just as many autograph hunters and selfie seekers as some Hollywood stars.

"Pepe! Pepe! Pepe!" shouted a group of teenagers who spotted him arrive Monday.

"I am not a star," said the rather embarrassed veteran left-winger, sporting one of two suits he owns, after the premiere of "El Pepe, a Supreme Life" by the cigar-chomping Serbian director Emir Kusturica.

"I am only here because my friend Kusturica asked me," said the man who chose to stay in his tiny farmhouse outside Montevideo growing his own vegetables rather than move into Uruguay's presidential palace when he was elected in 2010.

Five years later on the day he left office Kusturica filmed tens of thousands of people lining the streets of the capital to cheer the man they credited with cutting the country's poverty rate from 40 to 12 percent.

"Usually people take to the streets to get rid of politicians," said the flamboyant Sarajevo-born film-maker, who previously shot a portrait of Argentina football legend Maradona.

"We are not used to politicians who are an inspiration."

Kusturica - one of the few directors ever to win the Palme d'Or twice - said he had to meet "this president who drives a tractor and even fixes it himself. And when I arrived at his farm, he was on it!"

His documentary was screened hot on the heels of a feature film in Venice which tells how Mujica and his comrades survived 12 years of torture and solitary confinement for resisting Uruguay's two-decade military dictatorship.

The former guerrilla was shot six times during his time as a leader of the armed Tupamaros movement.

"The greatest feeling in the world is walking into a bank with a .45 Colt automatic pistol," he joked in the documentary. "Everybody respects you."

Yet the flower-grower-turned-revolutionary said the torture and deprivation depicted in "A Twelve-Year Night" helped forge him.

"How do we know what we are capable of if we're not placed in the worst circumstances? I would not be who I am if it wasn't for the time I spent being myself," he said.

Today the jail he was held in by the generals who ruled Uruguay from 1973 to 1985 is a shopping mall.

Che Guevara and the Pope

The movie's director Alvaro Brechner said the most impressive thing was not just how El Pepe and his friends "survived solitary confinement, but the way in which they did it - with no thought of vengeance."

The films come after yet another documentary featuring El Pepe, "Fragile Balance", has been a big hit in Spain. In it Mujica is a prophetic figure warning how the survival of the planet is inextricably linked to improving the lot of the poor.

uch a hero for millions because his austere lifestyle, sincerity and pragmatic idealism provide an antidote to the "fake left" in Europe "who have betrayed the poor and lost their way."

"He is clean when so many are corrupt. He believes that if you are chosen by the majority you cannot then live like the minority. He gives all of us who are seekers for a just society hope," he added.

Mujica, who keeps twin pictures of Che Guevara and Pope Francis on his mantelpiece, has taken to his new role as elder socialist sage with amused relish and not a little self-deprecation.

"I am not a star but I was kissed by one," he admitted in Venice. "All I've done is that one day I decided to try to sort out the world.

"It was my choice to be poor. I am a neo-Stoic, I suppose. I think it is better to have fewer commitments. Having lots of money and material commitments stops you living - and life disappears in the meantime. You have to dedicate time to the people you love."