Movie 'The Hate U Give' takes on racism, police brutality 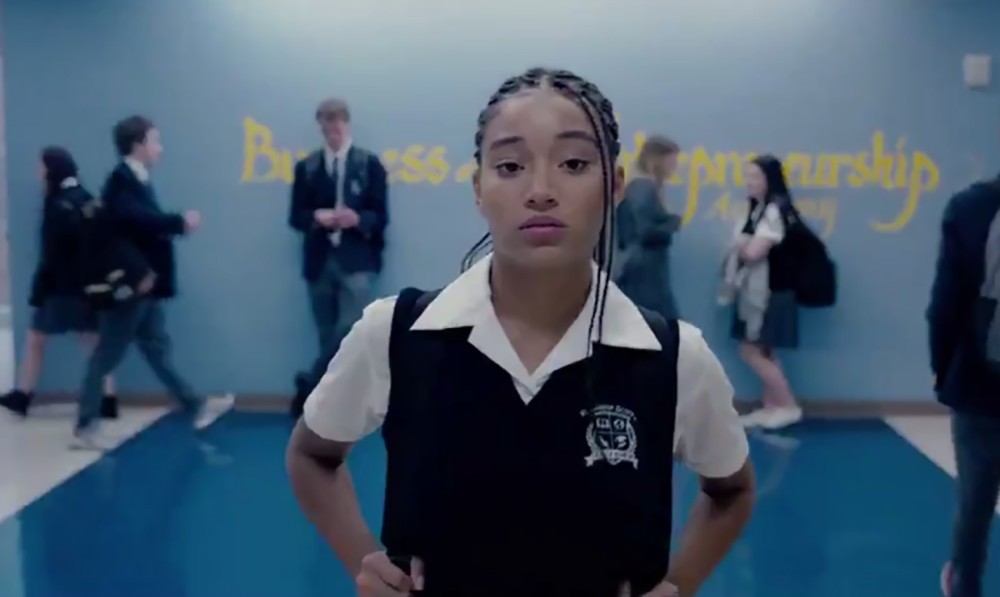 The Toronto Film Festival cast a spotlight over the weekend on racism and police brutality in director George Tillman Jr.'s "The Hate U Give."

Applauded by critics and audiences alike, the adaptation of the best-selling young adult novel by Angie Thomas is "a timely commentary in the Black Lives Matter era," said the festival's youth committee that chose to screen the movie.

"We are, through this film, protesting police brutality," said Amandla Stenberg who plays Starr, a teenage girl seeking her voice while living a dual life - growing up in a tough black neighborhood while attending a predominantly white prep school in another part of town in hopes of a safe and better future.

"Hopefully what it does is, make black people, black girls feel validated, feel empowered, feel strong, and stand up for their truth," she said.

"And hopefully it brings some light to these events, and evokes empathy in people to have real dialogue about it, from a real place instead of just understanding these events in a topical and sometimes desensitized manner."

The film opens with Starr's father (played by Russell Hornsby) trying to instill black pride in her and her siblings at a very young age, while also warning them of potential perils of being black, for example, how to navigate a police encounter - what Hornsby described to reporters as a chilling lesson for a child.

At school, although her classmates adopt the slang and clothing of black Americans, she is more circumspect about her cultural heritage.

"Slang makes them look cool, but it makes me look hood," she says in the film.

Back in her neighborhood, she is forced to flee a weekend house party broken up by gunshots, which is presented as an unfortunate normality in the community.

A childhood friend, Khalil (Algee Smith), offers to drive her home, but it all goes sideways during a routine traffic stop when Khalil is shot dead by a white police officer as the 17-year-old boy reaches for a hairbrush.

Investigating police seek to blame the victim, and by association Starr, while a local gang leader presses her to keep quiet for fear of being implicated, and a civil rights lawyer urges her to testify before a grand jury in hopes of getting justice for Khalil.

Such killings in the United States, publicized by smartphones and police video, have given rise to the Black Lives Matter movement. But prosecutions, let alone guilty verdicts, have proven rare.

At a press conference, author Angie Thomas said: "It is important to speak up and speak out, especially in moments of injustice." But too often, she explained, black people in impoverished and crime-ridden neighborhoods in the United States do not feel safe coming forward.

"Not snitching is a survival tactic," she said.

"There is no witness protection for people who talk about what happens in the neighborhood," echoed Anthony Mackie, who plays gang leader King in the film.

"As a community, as a people, as men, our job is to protect women and children and in this generation we have failed miserably," he said. "So until we do our job, the idea of speaking out about what's happening in our community is practically impossible because there's no one to protect you." The film, which will be released in theaters on Oct. 19, also stars Issa Rae, Regina Hall, Sabrina Carpenter, rapper Common, KJ Apa and Lamar Johnson.

"Hunger Games" actress Stenberg was assailed on social media for not being "black enough" when she was cast in the role, but delivers a stellar performance.

"It was the first time in my life that I'd had my blackness questioned," she said in Toronto. "Ironically it's something that Starr faces in the film." "It's been hard," she acknowledged. "But I have a great sensitivity towards the place from which that comes. It's a place of pain, it's a result of people being frustrated because they are navigating a colorist system at all times. And that's painful."