Bradley Cooper on his new movie 'A Star is Born'

Renowned Hollywood actor Bradley Cooper directed and produced his first film, 'A Star is Born,' contributing to its writing and soundtrack as well as starring in the lead role

The films of Bradley Cooper, who is an actor, producer and filmmaker, have grossed $7.8 billion worldwide and he was named one of the world's highest paid actors for three years in a row. This year Bradley Cooper directed his first film "A Star is Born," a musical romantic drama, and contributed to its writing and soundtrack. We met with the actor in Toronto and talked about his directorial debut and working with Lady Gaga.

Daily Sabah: When did the desire to direct start in you and why did "A Star is Born" include music, performing and singing?

Bradley Cooper: I always thought I had like six characters inside myself. I know this sounds weird. Since I was a kid, I always thought that maybe I could play a musician and I've always loved music so much. Therefore, there was something deep inside of me that felt potentially I could maybe do something like this. And I just love broken love stories and the reality of relationships. I guess those were the two things why "A Star is Born" features such factors.

I've always known that basically, I have to direct at some point but I knew that I could only direct something that I had a point of view about. Therefore, I'm so lucky to be in a place where I could pitch something to a studio like Warner Bros. 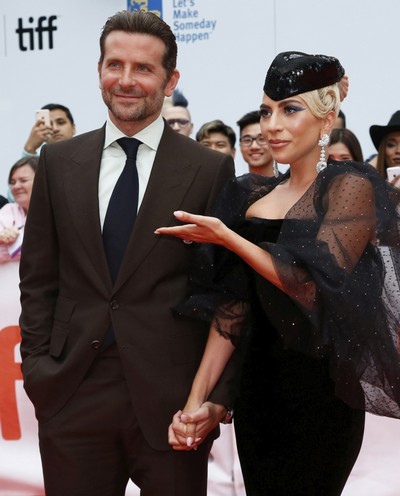 Bradley Cooper poses with Lady Gaga at the world premiere of A Star is Born at the Toronto International Film Festival (TIFF) on Sept. 9, 2018.

DS: Was it difficult to decide who would be the leading lady in "A Star is Born?" There were a lot of names linked to the role, including Shakira, Beyoncé and Jennifer Lopez. How did you decide on Lady Gaga? Were other actresses tested?

BC: That's a good question. I was at a cancer fundraiser and we came to the end of it and all of a sudden Lady Gaga came up and she performed a cover of "La Vie en Rose" and I was absolutely floored. And the next day I asked her agent if I could go meet with her, because I didn't even know what she looked like. Really, I had no idea who Lady Gaga was. I, once, passed her on the "Saturday Night Live" set and I still didn't know what she looked like. Then, I drove to her house the next day and I still remember, she came down the stairs and she looked like Lady Gaga. But I never got to see her eyes. And we sat down and her eyes were so beautiful. I just love eyes, and she just was so open and we connected right away. I don't know what got me to do this but I said within five minutes, hey it won't ever work unless we could sing together, do you know this folk song "Midnight Special?" And she's like, no. And I went, let's just sing it at the piano, she had a piano in her living room. And we went there and we sang together and it was kind of this magical thing. And that was it. And we went to Warner Bros. and I said, there's no question, it's got to be her. And then it was a long process. We shot a test in her house; we shot a scene to get the movie green lit. But yeah, once I met her that was it.

Oh everything, she's an incredible human being, completely open, highly intelligent, touched from God with her voice. Every day that she would sing on set, the whole crew was just sort of in awe. She's such a better singer than I ever even realized, I really do believe she's one of the great voices of many years. But she's just so relatable. I just love her. We have a similar Italian background. Her name's Stefani Germanotta and I call her Stefani. She's just great. I just got lucky because we had an incredible chemistry. I think it's the best chemistry I've ever had with an actress in a movie.

DS: Obviously we see in this film that fame comes at a high price. Do you ever wish that you were not famous?

I don't ever think about it. Normally, and especially since I've only done this movie for the last four years, I have to say that I felt pretty normal.

DS: Do you feel normal even when you hang out with someone like Lady Gaga?

Yeah, because she is Stefani to me. Therefore, I don't ever go like oh I wish I wasn't famous, that never even enters my mind. No offense about the craziness.

DS: Now that you have gotten a taste of directing, are you planning to direct more? What are your passions?

This was definitely the most artistically fulfilling experience that I have ever had by far and I have had wonderful experiences before. But I really did feel like I was in a place that I felt completely fulfilled creatively. So if someone will have me, that's all I like to do. We will see.

DS: Was it a choice or something that you planned to go back to your regular life and become a dad and change what you had been doing?

In terms of slowing down working wise, after "Elephant Man" I knew I needed to take a year off, because I was getting burnt out. We did 398 performances and that was right after shooting "Burnt" and then that was right after shooting "American Sniper" and right before that was "Aloha" and "American Hustle" and "Silver Linings" and "A Place Beyond the Pines." It was just like I didn't stop for like 10 years. And I definitely, that thing you hear people say, like you stop taking in nourishment by just living. So that was the only choice I made, and then life just started to happen.

DS: Take us into the timeline you act in "A Star is Born." You acted and framed the scenes. However, when everybody went home, you went and watched dailies. When did you sleep? How did it work for those 42 days?

It was insane, it was absolutely insane. That's the only way I can answer it. But I think I got like five hours of sleep and the good thing is my character Jackson, he doesn't look so good, so it was okay.

DS: For you, what makes a star? And when do you feel like a star?

BC: It's sort of being able to tell your story or a story and reach a tremendous amount of people. So I guess I remember when "The Hangover One" came out and we were in the airport heading to Europe, and Keith Richards' family was there, and they were talking about "The Hangover" and I thought like, that's crazy man. So I don't know, I think that was the moment.

DS: I talked to Lady Gaga and I thought she was very emotional and very vulnerable and very thin skinned. I wonder, during the shooting, did she breakdown and continue in certain moments?

Thank God no, because we had 42 days to shoot the movie. We would have been in real trouble. No, she is just an incredible actress who is emotionally available and which is all you want.

DS: You played an alcoholic and a drug addict in such an authentic way and I wanted to ask how you prepared and researched this role? Have you ever been a co-dependent and have you had a family or friends who have had that problem?

The thing that was the barometer for success for me was that if any musician sees the movie or anybody who has anything to do with addiction sees the movie, he or she will feel that it was authentic, This was really important. Also the fact that we had the real deal with the musicians so the world had to be authentic just so you are not watching the movie thinking this is somebody real and the rest of the world isn't. I approach everything by making everything personal and that is the only way I know how to do it. I had drawn on things that I have gone through and things of people of the world and people I watched and things I read, that's the way you approach every role.

DS: You are a huge star now but could you tell me about your very first job?

My very first job was working for my Latin teacher, he was a collector of memorabilia and I was moving stuff from his office. And the second job was I was a busboy at Alexander's Restaurant when I was 15.

DS: What's your relationship with music now? Are you still singing; is this something you're going to do more?

It's interesting to learn the ins and outs of producing a show. Just where the cords go and the amps, learning all that stuff is fascinating. I definitely look at a concert differently now when I go, see how they set up everything, their equipment, in a way that I never did before. I'm not singing now. It's just the thing about storytelling. You finish one thing and then you go on and find something else that inspires you and then you dive right into that.

DS: Were there any artists that you pulled from in constructing Jackson?

It's such a great question because as an actor you grow up mimicking everybody, your uncle, your neighbor et cetera. Similarly, with music I tried to mimic every single sound that I loved while growing up. So as it started I definitely knew how I wanted my character's guitar to sound, I wanted him to have a pure, not very fluid but muscular sound like Neil Young, I love the way he plays the guitar. So I definitely wanted it to sound like that. But also, I've always been so heavily influenced by Thom Yorke and Radiohead and so many more artist, I just love music so much, and it was a culmination of 43 years of listening to music.