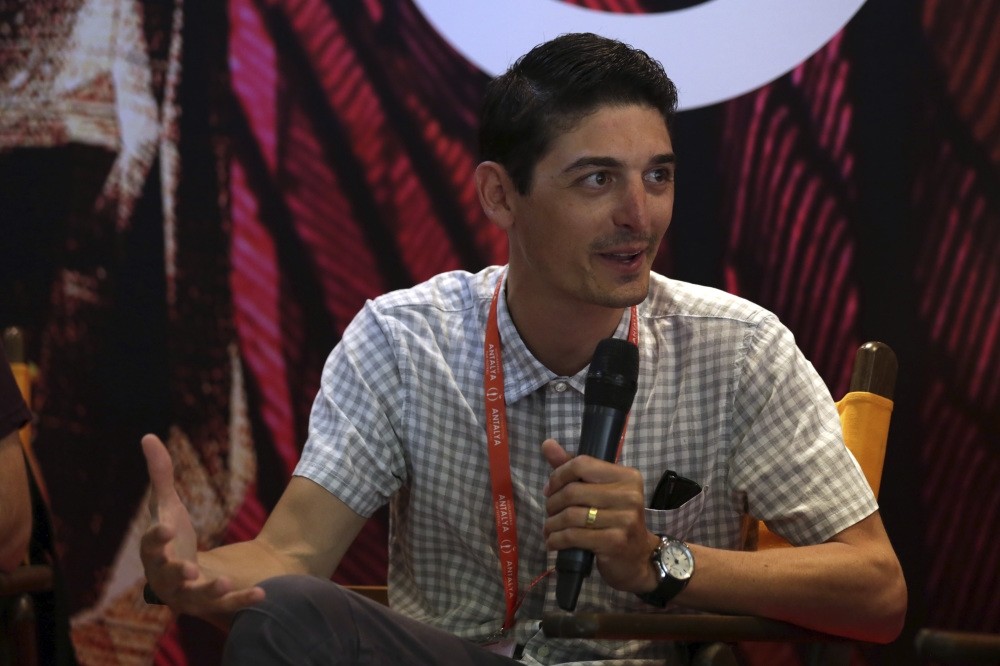 The director of the documentary, Derek Doneen, was in Antalya for the screening.
by Zeynep Esra İstanbullu Oct 03, 2018 12:00 am

The Sundance-winning documentary, ‘Kailash' by Derek Doneen, to be screened at the 55th International Antalya Film Festival will touch the hearts of film lovers with its real, heart-wrenching story

The 55th International Antalya Film Festival continues to offer award-winning films to cinema lovers. The only documentary in the competition category, "Kailash," is a striking production that lays bare the dimensions of child trafficking and child labor.

The film revolves around the sacred ideal and struggle of Kailash Satyarthi, an Indian activist who, with his wife and children, has saved thousands of children from slavery and child labor. As a last-resort for families to survive, children are sometimes sold to child traffickers who force them to work up to 16 hours a day, often enduring physical torture, abuse and intimidation. Traffickers will also kidnap children without their parents' knowledge, lost to their families forever.

While portraying the tragic lives of children enslaved by traffickers, relentless bosses and local police who turn a blind eye to this crime in exchange for bribes, the documentary is also a source of inspiration as an example of what can be achieved through resistance, perseverance and activism.

Satyarthi was educated as an engineer; however, he had always had an interest in social matters and activism. He was aware of children who never received education and at very young ages had started working under dire circumstances. He wanted to stop this humanitarian crisis. He has written many essays on the matter and met his wife-to-be, who is involved in similar work, in the process. One night, a man came to his house, saying he had just escaped a factory that had kept his daughter and him as slaves and threatened to sell his daughter to a brothel. His only and last resort was Satyarthi, who set off for the factory immediately. However, he could not save the little girl and the others locked inside due to the lawless intervention of the owners and the police that protected the villains. He understood that he needed to take action but ended up losing a friend, who was beaten to death by those wanting to hinder his march against child labor. Satyarthi says in the documentary, with tears in his eyes, that he still bears the burden of his friend's death on his shoulders.

Ignoring all the violence and threats against him and his family, he saves around 85,000 children from "under the counter" workplaces and circuses. He builds a safe haven for them until their families, who must promise to protect them from child labor, come and take them home. If the families fail to protect the children, they are always free to come back to the safe house for basic needs like food, shelter and education. Today, many of them are involved in academic studies or work at prestigious workplaces, while Satyarthi and his family continue with their activism, warning people: "Do not buy from brands that are not child labor free. If something is extraordinarily cheap, it is probably a product of child labor. Please be aware."

The director of the U.S. documentary, Derek Doneen, who bagged the Grand Jury Prize at this year's Sundance Film Festival, was in Antalya for the screening as the director of the only documentary in the competition category. He detailed his inspiration in wanting to make the film, how he and the young subjects of the documentary were affected and what he expects from the film in terms of raising awareness. He said he intended to let people know about the issue because everybody is a consumer and most of us are not aware of how products are produced. He insists on the fact that everyone should seek the right to know if a particular product was made with child labor. "It is very hard to detect this. However, like the signs put on, for instance, organic products, every item should have a sign that they produce without using child labor. This must be a demand of consumers around the world," he noted and continued to explain that many huge brands produce in countries like India to reduce their costs to compete in the market and that famous brands may be even using child labor, or slavery, to save a few pennies.

From idea to production

"My production partner was making a film about Malala Yousafzai, a Pakistani activist who won the Nobel Prize the same year as Kailash, in 2014. He emailed me, informing me that he met a man named Kailash, who was doing amazing things, and I was inspired to make a movie about his struggle because I did not know his name before, like many other people in the world. I needed to make his work known. I thought this topic should be discussed all around the world," he said, explaining his motivation for making the film.

Having started working in the sector as an intern at Participant Media, the main producer of the documentary, Doneen took action to collaborate with Kailash and his crew and talked to him about the project. Doneen flew to India and spent three weeks on the ground. "We participated in raids on factories, conducted interviews while trying to make Kailash trust our good faith and tried to figure out if making such a film was possible. We compiled a nine-minute video with what we had," he explained, describing how he got started shooting in India.

Doneen and his team invested a lot of time and effort into getting a better understanding of the situation and how Kailash's organization conducted their work. "We saw each other nearly every day. We shot six months on the spot over the course of two years," he noted. "Before we started the film, we had already mapped out the story. The film was going to revolve around Kailash's story, the child laborers and a particular missing child named Sonu. Even before we knew which children would be featured, we had mapped it all out scene by scene. But when comparing what we had planned and what it turned out to be, it amazes me. We shared wonderful moments with the kids that we could have never have scripted. It was a massive story and really difficult to cut down to 90 minutes," Doneen added.

In such a delicate situation, it is hard to create a sincere, real and natural atmosphere in a documentary. The child laborers featured in the film are real; they do not act, and they have lived through a lot of torture and trauma. Derek Doneen spent three weeks with them in the safe house after they were saved by Kailash's team. He even stayed there after each shoot to build friendly communication with children and for them feel comfortable since what they were sharing with the team was very private and sensitive.

In such circumstances, threatened by factory owners and mobs, the team had a tough time shooting the film. "Filming was intense. There was real chaos. Every time you infiltrate a child trafficking operation, there is inherent danger. We relied on Kailash and his team because they save children every day. We had to be confident in their work," Doneen said.

About the process of getting permission to film from the authorities, Doneen also credited Kailash and his team's help as the Nobel Prize won by Kailash was appreciated by the government and they supported their work.

During the rescue operations and in scenes where the children's recovery process is portrayed, the audience can see the faces of real young survivors. Doneen explained his purpose in doing this: "From the beginning, it was really important for us to show children's faces to make an impact. The documentary should have faces. For instance, when shopping, people should remember those children's faces."

In order to raise global awareness, the film will be released on YouTube soon. The director says he made the film to be shown on the big screen, but considering the much wider accessibility of the channel, he now thinks it will be able to reach a wider audience online.

Musical scores contribute greatly to the effect of films when made meticulously. The musicians Doneen worked with had experience in cinema and with documentaries, so they were able to enhance the cinematic effectiveness of the film. They used authentic instruments, which the director appreciates due to their own slight imperfections. Doneen stated that there are two different story lines in the documentary: Scenes of rescue operations, and those showing the recovery process in the safe house provided by Kailash's team. "The recovery process is quite delicate, and the operation scenes need more action and an energetic theme. They needed to be united with a universal sound," he concluded.