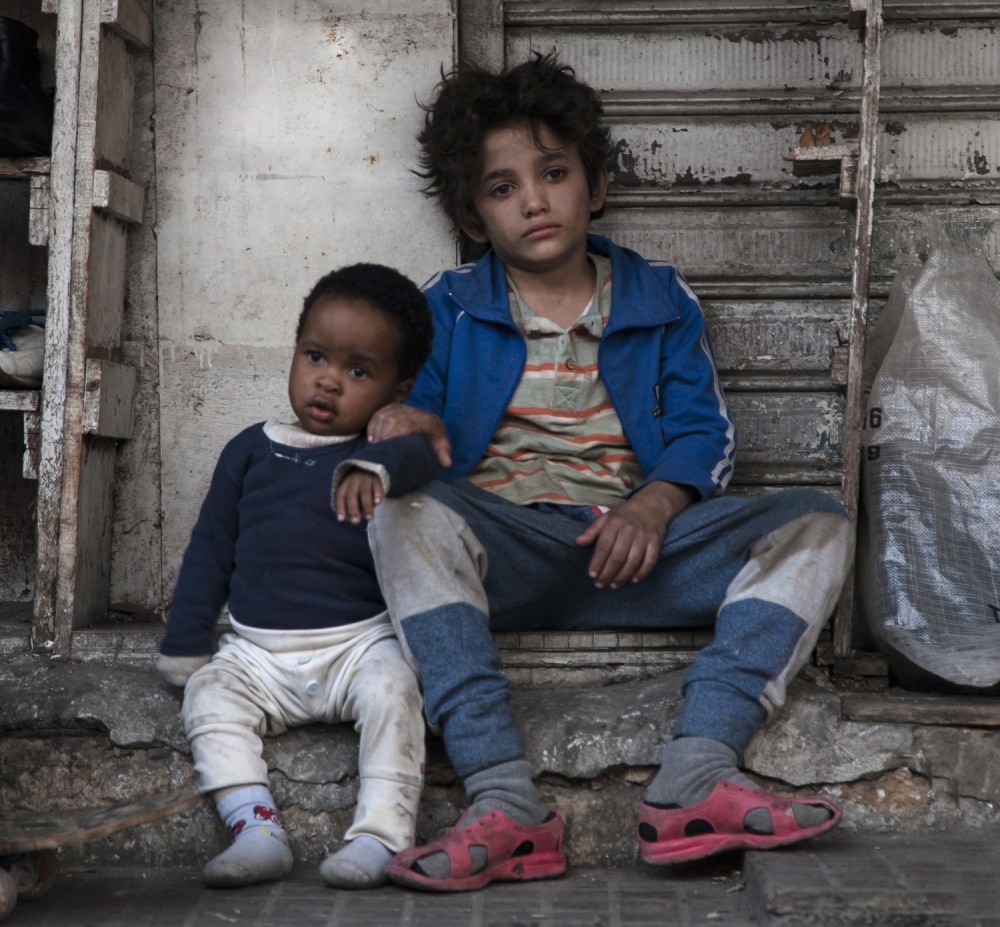 Accomplished Lebanese director Nadine Labaki's latest movie, ‘Capharnaum,' successfully portrays the hard lives of children in Beirut's suburbs and has received standing ovations at many festivals thanks to its delicate details

The moment I learned that the 55th International Antalya Film Festival, which closed on Friday, included Lebanese director and actor Nadine Labaki's latest film "Capharnaum" in the competition category, I was struck by irrepressible enthusiasm as I have been following her work for nearly 10 years. The film that introduced me to Labaki's work was "Caramel" (2007), offering a perspective on the daily lives of women around a hairdresser. I watched the film four or five times, mesmerized by the strong portrayal of women from various backgrounds, ages and desires. Motivated, the next film of Labaki's I watched was "Where Do We Go Now" (2011), depicting how local women in a Lebanese town get together to ease the tension between Christians and Muslims in the area. After that, she contributed to the 2014 production "Rio, I Love You," a film consisting of 10 love stories set in Rio de Janeiro. What all these films had in common was a touch of sweet romance, hope and female stories.

However, with this last film, Labaki has opened a new horizon in her cinema and in the minds of her audience. This time, she made a story out of a ghetto in Lebanon where poverty, violence, injustice and the fight for survival prevail. Naming her film "Capharnaum," or "chaos" in French literature, she prepares the audience for a tragedy in a "cursed" city, as composer Khaled Mouzanar, who created the striking score for the film that contributes greatly to its impact, said after the screening of the film in Antalya. He also noted that they spent four years in the suburbs to get a better understanding of the area's atmosphere, and no one in the crew was the same after their experiences in the area where they witnessed firsthand the heart-wrenching lives of the residents.

No doubt, a huge amount of effort was put into the film's technique, content and artistic direction. Labaki is a hardworking woman who has improved her art step by step, leading to this masterpiece – the term is not an exaggeration, considering the awards she bagged throughout the year at the Toronto, Cannes, Sarajevo, Melbourne and Norwegian international film festivals. She also received standing ovations after every showing of her film, just like in Antalya. 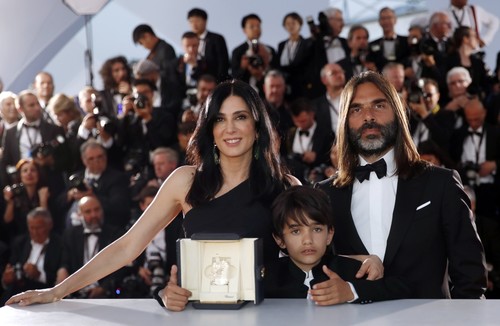 Nadine Labaki (L), Khaled Mouzanar (R) and Zain Alrafeea (C) pose during the Award Winners photocall at the 71st annual Cannes Film Festival.
The film's cast consists of realistic characters, making it very touching and down to earth. She portrays the story line from the perspective of a little boy, Zain, who is ignored by his family and tries to find ways out of many difficult situations with his pure young heart and resistance to villainy. The film starts at a hearing where Zain sues his parents because he was born. The story line opens with flashbacks.

Zain has several siblings, strangled by poverty and the ignorance of the family. He tries to save one of his sisters from his parents who want to marry her off at the age of 11 to get rid of the financial burden. However hard he tries, the power of a 12-year-old child cannot stop them. Struck by the trauma, he runs away from home and sets off on a journey that leads to more and more tragedy. In his new quest, an Ethiopian woman, who fights for survival as an illegal migrant with her little baby, enters his life. They have a sincere relationship and become a new family until she gets arrested. The agony of the woman who leaves behind her baby boy is masterfully depicted through Labaki's delicate lens.

After that, Zain and the little baby are alone in their struggle on the streets. Despite the hardships that even adults cannot bear, Zain keeps the baby and finds ways to feed him while his mother is in jail. Labaki shows us the strength of a child, while he is surrounded by the most vulnerable circumstances. He resists the toughness of life as opposed to his parents, who surrender to poverty and ignorance and who even refuse to release their birth certificates.

To refrain from giving away more spoilers, I'd like to discuss the film's technique and also artistic features that accomplished director Labaki added to the production. She successfully uses her camera for long shots from above the town or focuses on particular objects that depict the deepness of a certain moment. She uses light and air so skillfully that the scenes become considerably real, as if you could reach out and touch them. Colors also add to this perfection. The colors are so vivid that the audience is drawn into the story. Technique blended with an artistic eye has created a must-see production in Labaki's portfolio.

Fitting name for the film

Besides having created the score, Mouzanar is the producer of the film. He also co-wrote the script. "Capharnaum is a biblical town in Palestine. In the Bible, it was cursed by God because they did not believe. Later in French literature it meant 'the chaos.' The title was very convenient for the atmosphere of the film. In the destiny of Zain, there is something prophetic. The way he was persecuted by his own people and then leaves his home and helps others on his journey," he said, explaining how chose the name.

Mouzanar also explained how they came up with the idea: "For the last six or seven years, we were seeing a lot of Syrian or other refugee children on the street; we had not seen this before in Lebanon. The poverty is as high as it has ever been before. This time Nadine was pregnant.

Meeting every day the children, she had hard time dealing with the circumstances. She felt the need to do something about it. We spent the last four years going to these places and jails, as most of the children have criminal records. All of what you see is inspired by a lot of talking with them. This is not a true story but is inspired by what we heard from them."

With three other scriptwriters, Labaki and Mouzanar, who are a married couple, wrote the script. "What affected the writing process most was the casting as we had to choose people who could understand the film by their own lives. For example, the mother of Zain is herself a mother who cannot register her children. She does everything, but it is legally impossible for her. What she played was her own life. These kinds of things make the film real," he noted.

About the inclusion of the leading child actor Zain, Mouzanar offered striking information. "Zain is also a Syrian refugee without papers. So, at the end of the film, he smiles when he has an ID. After the film, he finally got to have an ID with the help of the U.N., and he has now settled in Norway with his family. Two weeks ago, he started school there. When we found Zain, he was a kid in the suburbs of Beirut. We had a big casting team in search of characters in the streets. The moment Nadine saw him, she knew he was the one. No one is a professional actor, except Nadine Labaki, who has a very short appearance as the lawyer of Zain," he said.

"The black baby girl, who plays a boy in the film, also legally does not exist in Lebanon. Her mother is Nigerian, and her father is Kenyan. The baby did not have papers. While we were shooting, both of her parents were arrested. We took care of her for one month at home. Once she got sick, and we could not take her to the hospital, as she did not have an ID. So, we really lived the incidents in the film. Finally, we succeeded in getting them out of jail. Now, she is in Kenya, and she also is in school," he said.

Unseen city in the middle of Beirut

"Where we shot the film was five minutes from the center of Beirut, but no one dares to go there and see what is happening. It is like an underground city, which stands there but no one sees. There was a mountain of garbage, and we shot there for a month. It was really challenging. We spent half a year in their houses, in jails, in the neighborhood. We are not voyeurs; we were among them, with them, in hunger," he said, describing the hard circumstances in the ghetto where the film was shot.

Score of the film

As the musician who made the score, Mouzanar had to change his approach in the casting process. "While I was writing the script, I had written a lot of themes related to each character. It was very emotional. This was my first approach. Then when I met the real characters, saw the locations and where we had to shoot, the smell and the raw reality in front of my eyes, I threw away everything I made and completely changed my vision about the music."

A documentary out of a film

Mouzanar said they had 15 hours of footage before the film went into post-production. What is shown in the film is a small part of the real story. "We plan to make a documentary themed 'Before 'Capharnaum' and after 'Capharnaum,' depicting how our characters' lives were transformed with the film. We do not want to leave our cast. The documentary is an excuse to keep them in our lives. We have created an association called Capharnaum to raise money to help all the kids that acted in the film. The sisters of Zain in the film were real beggars in the street. They will be schooled soon. None of them are in the streets now. To help their parents to find jobs is also a part of the process," he concluded.