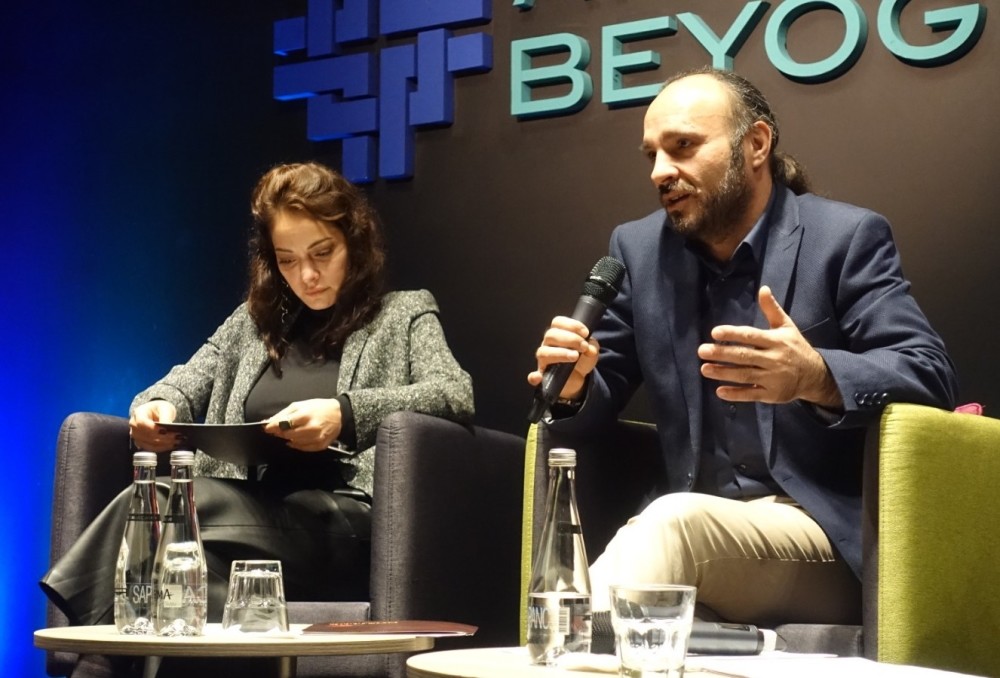 For the first time this year, under the auspices of the presidency of Turkey, ‘The International Amity Short Film Festival' will be presented to audiences on Dec. 14, 15 and 16

The International Amity Short Film Festival, built upon a the concept of friendship with spectators, aims to establish itself as a recurring event and intends to share all sorts of films that point directly or indirectly to the relationship between humanity and the universe. This theme will be conveyed by using cinema, one of the most effective forms of contemporary art. At the festival, which will be held on Dec. 14, 15 and 16, conferences, interviews, competitions and film screenings will take place.

Organized by Balkon Film with the support of the Ministry of Culture and Tourism, the General Directorate of Cinema and Istanbul Metropolitan Municipality (IBB), the festival's publicity meeting was held at Akademi Beyoğlu in Taksim.

Speaking at the publicity meeting for the festival, which was inspired by poet and writer Fethi Gemuhluoğlu's philosophy of "being a friend to a fellow, to an idea, to a neighbor, to a land, a history, to one's own body, to the visible and non-visible one," Festival Director Faysal Soysal said: "The Turkish nation is a charitable society and made no bones about helping the needy throughout its history. We decided to initiate this festival on the 40th anniversary of Fethi Gemuhluoğlu's death. Throughout the process of the organization, we got positive feedback from everyone. People reacted to our project in an energetic and positive way, which honored us. We held meetings with short film platforms. We released announcements and got applications from various countries around the world."

"Within the scope of the festival, every year we will decide on a country where the festival events will be conducted. We selected Bosnia-Herzegovina for this year's festival events. In the following year, we will develop ties with some countries at the short film workshops, however, film screenings will be in Bosnia-Herzegovina. In addition, we negotiated with festival directors. This way, we informed international press and directors that this organization is not just a thematic festival, but it also has a large spectrum with various dimensions. For now, we took 789 films with the 'amity' theme from 76 countries. However, just 17 of them were accepted for the competition," he explained.

The film screenings will be presented under four main titles: Competition Selection, 40 Years' Sake, Panorama and Private View. The competition selection has 17 films, each one from a different country. The selection 40 Years' Sake has 18 films from six countries. This section is dedicated to amity, fidelity and appreciation in terms of creating the festival's identity and memory. The Panorama selection, on the other hand, offers award-winning short films from the global arena. Most of the films will be shown as their Turkey premieres. When it comes to the Private View section, spectators will see "Marmoulak" ("Lizard") by Kemal Tabrizi, one of the festival jury members, "Eyes of a Thief" by Najwa Najjar, another jury member, and "Khane-ye doust kodjast?" ("Where is the Friends Home?") by Abbas Kiarostami.

The general art director of the festival, Mehmet Lütfi Şen, noted that Fethi Gemuhluoğlu always supported young intellectual people with a friendly attitude toward Anatolia both morally and materially: "It wouldn't be wrong to say that most of the films, poems and valuable works produced in today's Turkey bear the signature or the soul of Fethi Gemuhluoğlu in a way. For example, we see traces of Gemuhluoğlu in the stories by Bilge Karasu and Rasim Özdenören as he was an Anatolian intellectual who embraced all. First of all, he was quite aware of the value of Anatolia and of the civilization and raised a cultural army behind him."

Şen stated that today Turkey doesn't have any institutions, foundations or figures that

conduct missions similar to those undertaken by Gemuhluoğlu: "And we thought that young people protect the values raised by Gemuhluoğlu. In the aftermath of the long talks and negotiations made from time to time with our friends Selman Gemuhluoğlu and Hasan Ali Yıldırım, we decided to initiate a short film project, as cinema is the easiest way to reach young people since they are quite productive in the area. Looking back at the times we were thinking about initiating such a project, now I feel so glad we did. In the decision-making process, I insisted on presenting the festival with an 'international label' as we live in a global world. In this global arena, everyone needs friendship. Our world faces a capitalist time. People just look out for their own interests, which is quite hopeless in the name of humanity. We, as Turks, are also so far away from embracing our civilization."

Sezin Akbaşoğulları, one of the jury members, announced the films that will be screened under the competition category.

Stressing the importance of the festival's theme, Akbaşoğlu said: "Amity is a quite unifying theme. I hope this festival will be long lasting and open the way for goodness, for the birth of successful filmmakers."

Anjelika Akbar, the musician and composer who will take the stage on the gala night of the festival, also made a short speech at the meeting. The short films presented under the scope of the festival will be displayed at Bahçeşehir and Istanbul Universities in addition to in cinema halls in Kadıköy and Beyoğlu.

On the other hand, Salt Galata will host the talk "From Short Films to Long-lasting Friendships" on Dec. 15 and the Private View selection. At the same time, the Lifetime Amity Award prepared under the scope of the festival, will be presented to Reis Çelik, Biket İlhan and Süleyman Turan this year. The film that comes in first in the Short-Length Film category will be awarded the Fethi Gemuhluoğlu Amity Award with a monetary prize of TL 40,000 ($7,600), while the second-place film will be awarded TL 20,000 and the third-place TL 12,000. There will also be an extra prize of TL 15,000 for a short film.