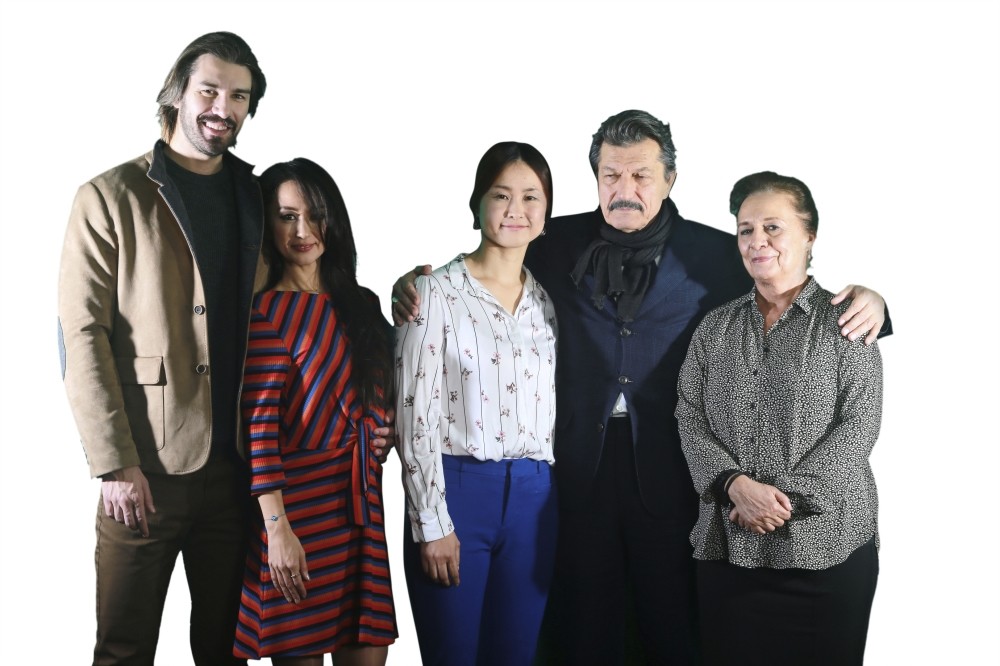 The shootings of the ,Escape from Tehran, started in Cappadocia, Nevu015fehir with a multinational crew.
by Daily Sabah with AA Dec 18, 2018 12:00 am

Adapted from Erdal Güven's book about the rescue of 215 Japanese citizens from Tehran, the filming of ‘Return to Home' began in Turkey's Cappadocia under director Hakan Kurşun

During the Iran-Iraq war in 1985, Tehran was bombed and 215 Japanese passengers were left stranded there. With Turkish Airlines, Turkey rescued the passengers and brought them to Istanbul, saving their lives. Often,described as "the operation of the century," this event helped excel the relations between the two countries.

Journalist-author Erdal Güven's book "Escape from Tehran," tells the story of the 215 Japan citizens and their journey to Turkey from Tehran. Now, his book has inspired director Hakan Kurşun's latest film "Return to Home." The shooting for the film recently started in Turkey's Cappadocia region. The screenplay was written by Fatih Özcan and Şeyda Delibaşı. The film features Furkan Palalı, Burhan Öcal and Megumi Masaki in the lead roles. Filming will also take place in Istanbul and Tokyo.

Güven not only details the rescue of 215 Japanese passengers but also mentions a story of a Japanese girl following in her Turkish father's footsteps after 30 years. This combination of story lines will transport the audience through a love story and then into a family drama. In the film, spectators will meet a young Japanese girl named Keiko. She is among the 215 passengers put on a plane to be brought to Turkey during the major operation in Tehran. The film starts with the great love between Keiko and the Turkish ambassador, Lt. Zafer. The couple have a daughter, Yumi. However, Yumi learns the truth about her family 30 years later from a letter her mother left behind when she died. She decides to go to Turkey to find her father. As a result, the plane will not only land on a runway but also in the middle of a great love story in the film.

Supported by the Culture and Tourism Ministry's General Directorate of Cinema and shot under the sponsorship of Dorak Holding, Turkish Airlines, Vakıfbank, Safi Holding, Nissan and Incekara Holding, the film will be screened in Tokyo and then in Turkey on April 30, 2019. As Japan announced 2019 as the Year of Turkey, this film has a great meaning for the country.

Güven also undertook the production of the film on behalf of Macmedya. Speaking to Anadolu Agency (AA), Güven confirmed that they had started shooting the film and that the production is expected to strengthen the countries' ties even more. "There are two cornerstones for the relations between Japan and Turkey. One of them is the Ertuğrul Frigate accident, and the other is the Turkish rescue of 215 Japan citizens from Tehran in 1985. However, these two events are only superficially understood. This film will establish a bridge between Turkey and Japan," he said.

Noting he started his career in journalism while studying at university in Eskişehir province, Güven said that he wrote columns for different newspapers later. While he was working at Turkish daily, Hürriyet as a representative, he traveled to Japan. Mentioning that he formed close friendships in Japan, the journalist said he soon realized relations with Japan could be strengthened even further.

Highlighting that he is not a diplomat, Güven said: "I collect news from the street. You can do nothing when you leave streets. You can do nothing in the plazas. If a film director looks through a narrow window and tries to comment, they will fail."

Referring to the importance of learning about Japanese culture, he continued: "A Japanese philosopher once said during an interview: 'I am 90 years old, was born in Japan and will probably die here. My life passed with social psychology. I tried to get to know the Japanese people. I still cannot say I know them; however, a foreigner can write books about Japan after staying in this place for two days. I cannot understand this.' As a matter of fact, Japan is a country where a lot of business relationships can be created once the culture is understood. The basic point of knowing Japan is culture. You have to know the basic culture of Japan. For this, we need to bring it here."

He emphasized that Japan is hardly known in Turkey apart from its food and cars. "In fact, relations between the two countries date back to the end of the 1800s. Sultan Abdülhamid II had noticed Ja

pan and contacted the Japanese empire."

Noting that hundreds of martyrs died aboard naval frigate Ertuğrul, Güven said that the other 70 causalities were rescued and taken care of by Japanese people.

He indicated that "Return to Home" focuses on only the truth and reported: "In 1985, more than 430 senior Japanese was in Tehran during the most feverish periods of the war. Saddam Hussein revolted, and the U.S. administration was clearly supporting him. He announced that he would hit Tehran, including the airport, and warned the world about evacuating their citizens in 72 hours. This time period was too short for Japan to take action. The late Turgut Özal, who had private relations with Japan, dealt with the issue. Turkish Airlines chose volunteer crews and landed on Tehran three hours before the bombing started."

, a love story also adds to the tragic event. "We actually want to show Japan how well thought out Turkey's action was. While we were doing it, we also took the sensitivity of Japanese into consideration. This is why we will not depict a sensational escape, like in 'Argo.' We worked with great scriptwriters and put together a good cast. Our lead actor, Fukran Palalı, has a fresh face, which will be liked by Japanese people. In the visual sense, we will present rich scenes from Turkey. The production will be visible in all of its scenes. This is why we put great importance on every scene. We want to capture the heart of our audiences. We think that the biggest promotion for a film is spectators' recommendations to each other," Güven stated.

He noted that Macmedya brought Japanese cartoons to Turkey, and its work with Japan conducted for 20 years will be crowned with this film.

Güven, who has written 12 books on Japan and made several documentaries, added that they were planning to hold the first screening of the film, which has a surprise ending, in Japan in April 2019.