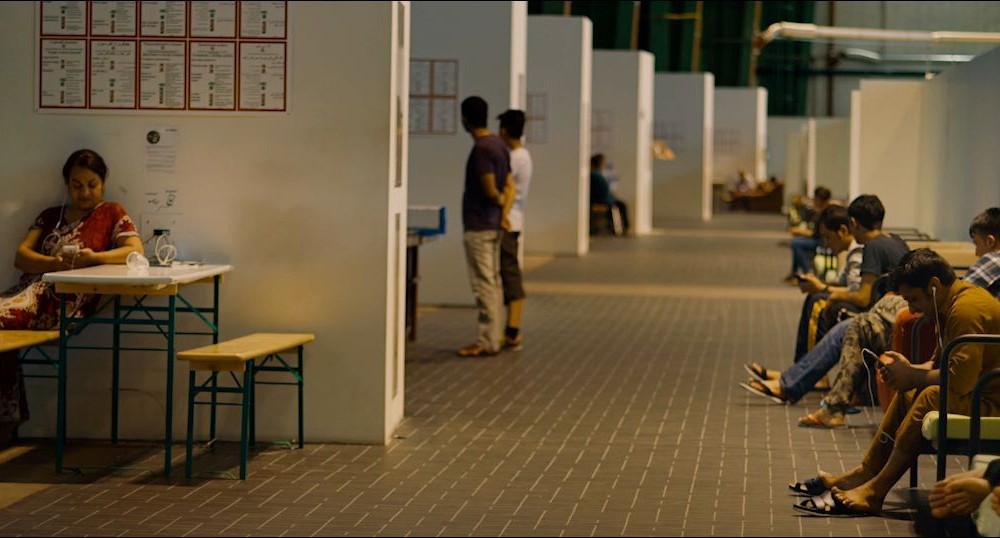 The documentary gives a rare insight into the day-to-day existence of a refugee in a camp.
by Nagihan Haliloğlu
Dec 24, 2018 12:00 am

In ‘Central Airport THF,' Karim Ainouz documents the lives of refugees in the old Templehof Airport in Berlin. The film centers on an 18-year-old Syrian refugee, Ibrahim, but we also get a glimpse of the lives of others trying to build a relationship with their new country and the historical building they are temporarily housed in

There is an airport in the middle of Berlin. I've known this from innumerable WWII films I watched growing up, and I've known it first hand as an adult because one of my best friends lives not very far. So, however I may have arrived in Berlin (more often than not at the Hauptbahnhof), the moment I arrive in Berlin as a "home away from home" is seeing the Jugendstil architecture and friezes of Templehof as I get off the U-Bahn at Platz der Luftbrücke. It is a name that tells of yet another period of Templehof's history; when the Americans carried supplies to a West Berlin that was a pocket of the free world surrounded by communism.

This eventful past of the airport is evoked in the very first scene of "Central Airport THF," as we see a group of tourists being explained the history of this huge, modernist structure that quickly failed to meet the demand of a public that wanted to fly more and more back in the 1920s. It is naturally important to evoke the history of the world wars in this documentary about refugees. The airport, now used as a refugee "sorting" center, is testimony to Germany's aspirations in the 1920s that gradually led to WWII and to the forced migrations of people throughout Europe. We are, then, at one of these phases in history when people are moving across Europe en masse, this time not as a result of a war fought in Europe, but a proxy war fought in the Middle East. Mass movements of people are not an anomaly but a natural part of the progression of history, as is already suggested by the very name of the Brazilian director whom we have to thank for this beautiful film: Karim Ainouz.

Ainouz follows the story of Ibrahim al-Hussein, an 18-year-old refugee, who is waiting to get refugee status. We walk with him around the airport itself where the refugees are housed, and the surrounding green space, which has been turned into a park for the benefit of Berliners- a park, indeed, that I have visited with my friend. The documentary gives us a rare insight into the day-to-day existence of a refugee in a camp- one of the better ones in this case. We follow Ibrahim's journey month by month, as he reminisces about his life in Syria and wakes up to calls from the compound's megaphones that advertise hairdresser and doctor's appointments. We see Ibrahim take German lessons from elderly German ladies, and make enviable progress with his tenses and cases. One of the reasons the audience warms to Ibrahim is that here is a refugee who is making every effort to become a good citizen, giving the lie to discourses that refugees don't want to integrate.

Yet there are certain things you cannot, would not,want to change about Ibrahim: his particular, Middle Eastern, joie de vivre, which, to my Turkish mind translates as "keyif." There is a scene in which Ibrahim is sitting outside the hangar in the evening with two of his Arab friends smoking shisha. They have the usual young man banter, but more importantly, at one point one of them says looking at the lights beyond the park into the city: "What a view!" That moment of enjoyment is pure resistance. These young men whose lives have been stolen from them by geopolitics, not knowing whether the country they are in will accept them or not, are still looking at lights on a beautiful night and enjoying the moment. 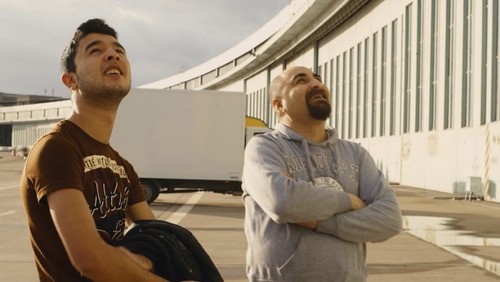 Alongside Ibrahim, we also get to learn a little bit about the Syrian doctor who helps out and translates for the patients in the center. From snippets of personal conversation we learn that he has applied for refugee status and work permit, but that he has been waiting to hear from the authorities. Unintentionally chilling are the conversations that the refugees have about being transported to other refugee centers, wondering if the facilities would be better or worse in these other places. They echo the conversations we are familiar with again from WWII films, German Jews not quite sure where they will be transported in their midway stations.

These conversations in Ainouz's narrative, however, are there to suggest that the Germans are doing a good job at Templehof, that people are loath to leave it for other camps. We see the refugees go the camp authorities with their problems, children milling about and playing on the concrete floor. A generation is growing on the road to safety and security. There is a very short shot of a child playing with water in front of her family's four walls. We see her pouring water on the concrete floor and it just stays there. This scene touches me disproportionately considering the images we keep seeing on television. I know it is the fate of many children to have to play on concrete floors or asphalt, refugee or not refugee. I am reminded that concrete is the most prevalent medium we live in, and this scene calls to my mind that other lyrical documentary by Ziad Kalthoum, "Cement," chronicling the lives of Syrian construction workers in Lebanon. Our dependence on and symbiosis with cement in war and peace is laid in relief in both these documentaries, and it makes me feel very uneasy.

The documentary doesn't quite tell us how entrance and exit to the camp is regulated: We see Ibrahim run in the park that falls just outside the primary location of the airport structure. We see, through his eyes, families that are picnicking, people his age having fun. There's a clever shot of a very Berliner girls' group. A blond girl, a black girl and a Turkish girl in a hijab and heavy make-up, whiling away their time smoking, naturally, shisha. The Turkish girl is the visual marker of another movement of the peoples some decades ago- a nice touch by Ainouz to remind us that Ibrahim will, when his papers are in order, join the Berliners who are allowed to have their day of rest in the park.

Ainouz explores some other characters in the park, like the inevitable hipster communal-living people who are always trying to find ways of cooperating in good deeds like saving the environment and refugees. This group is set off by a scene of a man tending to his bees: We see the hive and bees on top of one another, crammed, but producing something beautiful. I guess there is a metaphor in there somewhere about human life on earth. Ainouz rewards us with some "happy endings" in the film, but tempers them by reminding us that refugees will keep coming into Europe if the conflicts outside this continent are not resolved. When we see the airport one last time, we see that more container units have been added on the asphalt outside the hangars, waiting for their new occupants hoping for a better life on this continent.