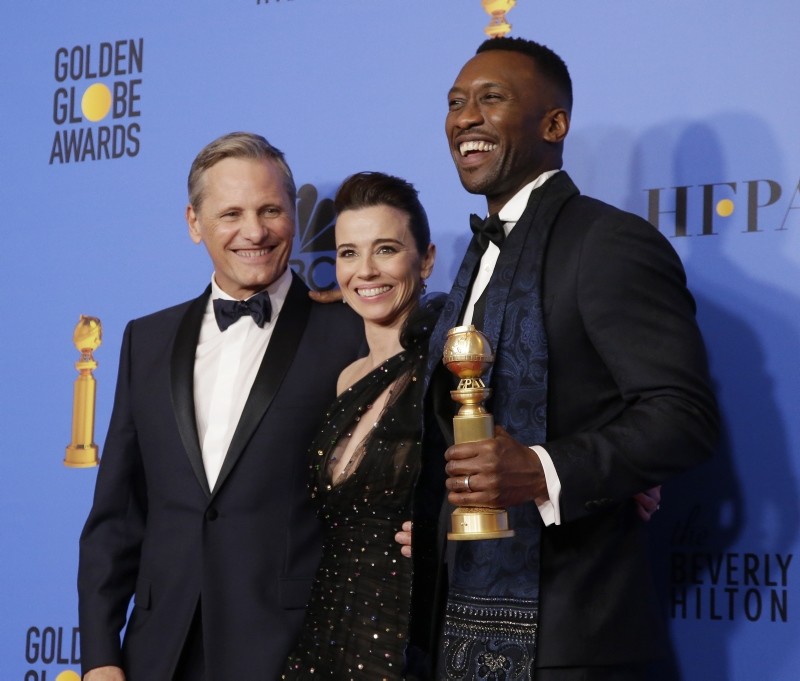 Viggo Mortensen, Linda Cardellini and Mahershala Ali pose with the award for Best Motion Picture, Musical or Comedy for 'Green Book' in the press room during the 76th annual Golden Globe Awards ceremony at the Beverly Hilton Hotel (EPA Photo)
by Associated Press Jan 07, 2019 12:00 am

Portrayals of real-life musicians dominated at the 2019 Golden Globes as "Bohemian Rhapsody" and "Green Book" won top honors, while the films' stars also picked up awards for their acclaimed performances.

"Bohemian Rhapsody," about the late Queen frontman Freddie Mercury, bested another movie surrounded by music, the favorite "A Star is Born," to win best picture, drama and best actor in a drama for Rami Malek.

Though music is at the center of both "Bohemian Rhapsody" and "A Star Is Born," the films competed in the drama categories instead of musical/comedy, submitted that way by its studios.

"A Star Is Born" walked into Sunday's Globes as a favorite with five nominations, but only ended up winning one award: best original song for "Shallow," co-written by Lady Gaga.

"As a woman in music it is really hard to be taken seriously as a musician and as a songwriter," Gaga said onstage, adding that her co-writers "lifted me up, they supported me."

The award was presented by Taylor Swift and Idris Elba at the Beverly Hilton.

It was Gaga's second Globe win: In 2016, she won best actress in a miniseries or motion picture made for television for her role in FX's "American Horror Story: Hotel."

"Shallow," performed by Gaga and Bradley Cooper, has earned four Grammy nominations, including song and record of the year. The track also reached platinum status and became a Top 5 hit on the Billboard Hot 100 chart.

The song, shortlisted for best original song at the 2019 Academy Awards, beat out some heavy-hitters at the Globes, including Kendrick Lamar and SZA's "All the Stars" from "Black Panther"; Dolly Parton and Linda Perry's "Girl in the Movies" from "Dumplin'''; Annie Lennox's "Requiem for a Private War" from "A Private War;" and Troye Sivan and Jonsi's "Revelation" from "Boy Erased."