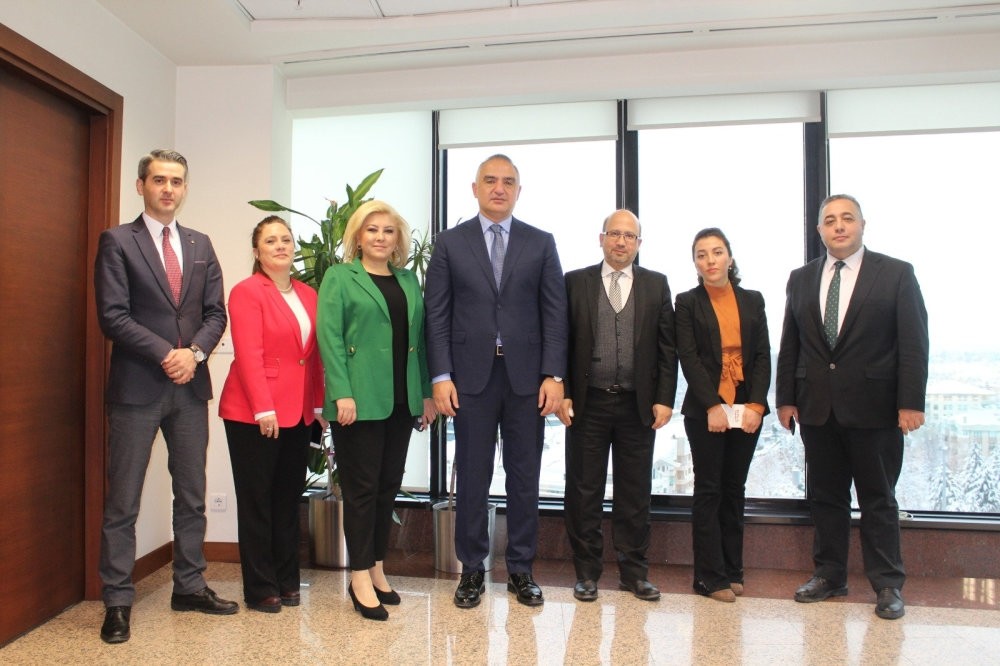 Culture and Tourism Minister Mehmet Nuri Ersoy has provided insight about the current cinema tickets debate, Turkey's tourism initiatives and artifacts being returned to their homeland

Culture and Tourism Minister Mehmet Nuri Ersoy said Tuesday that they will not allow any actor to regulate prices in the movie sector other than the state, as a debate between film producers and movie theater operators about ticket prices continues.

Speaking at a press meeting with Ankara representatives of the Sabah and Daily Sabah newspapers as well as the ATV and A Haber television stations, Ersoy said a legal framework was prepared after meetings with 10 parties about the movie ticket discussion, adding that an e-ticket system will be implemented to avoid places that do not officially sell tickets.

"There was a significant change in the share of revenue in the market. Some 65 percent of the revenue and

50 percent of the number of tickets are controlled by a company. The state will not allow the unequal reduction of ticket prices," Ersoy said. Many figures from the sector expressed their thoughts about the allegations that caused these discussions through their social media accounts.

Ersoy said the ministry will cover 30 percent of the expenditures of the movies, which are shot in Turkey but shown abroad and indirectly promote Turkey. "Our condition is we should endorse its script and check how it portrays our country. Also, it should be screened in countries predetermined by us. We are also setting a website named 'filminturkey' for foreign producers, which will be

launched in June to guide directors," he said.

Stressing that about 5,000 art pieces, which were previously smuggled abroad, have been retrieved by the ministry to Turkey, Ersoy said they are also tracking down 2,000 more. "It is necessary to nationalize the excavation sites and to create awareness to not let them [art pieces] be removed from our country. Bringing them back is a costly and time-consuming effort," he added.

Many artifacts uncovered in Turkey are displayed in various famous museums throughout the world, even though they were illegally smuggled out of the country. Legal procedures to retrieve these artifacts take a long time. Most recently, Turkey retrieved the statue of Heracles from Switzerland and pieces of the famous "Gypsy Girl" mosaic from Ohio. Bowling Green State University in Ohio, U.S. agreed to return the pieces decades after they ended up in its possession after unknown smugglers took the pieces out of Turkey. They will be placed in Gaziantep's Zeugma Mosaic Museum, named after the ancient city where the mosaic was discovered. Since 2003, the Ministry of Culture and Tourism has secured the return of 4,311 artifacts illegally exported from Turkey.

Speaking about video footage showing a ballerina performing in Hagia Sophia without authorization, which led to public outrage, Ersoy said the security guards near the museum were doubled, and the ministry has warned 30 companies who are arranging tours to the holy site.

"The Hagia Sophia is an important and special place in society in terms of spirituality. Saying 'we haven't been informed' and apologizing is not a proper solution," he said.

After a video of a ballerina doing a split inside the historic museum on Saturday caused outrage publicly and in social media. The museum's administration announced Sunday that it has launched an investigation into how the incident occurred in the Hagia Sophia, which was once one of the holiest sites of Christian Orthodoxy, and then converted to a mosque, before it was turned into a museum.

Ersoy said direct flights will be launched to the Turkish holiday resorts of Antalya, Bodrum, Dalaman and Izmir from the U.K., the Gulf countries, Russia, Ukraine and some cities in Germany as of April. "We will increase [these flights] every year. By 2023, we will reach 70 million tourists and $70 billion in tourism revenue," he explained. Turkey has been one of the top tourism destinations worldwide for visitors. According to Culture and Tourism Ministry statistics revealed in late December, more than 37.5 million foreigners visited the country in the first 11 months of last year, up 23 percent year-on-year. The data also showed that Istanbul, Turkey's largest city by population and one of its top tourist draws, and the Mediterranean resort city of Antalya, attracted the highest number of foreign visitors - 12.4 million and 12.3 million, respectively.