Hugh Jackman: I'm not having a midlife crisis that I know of 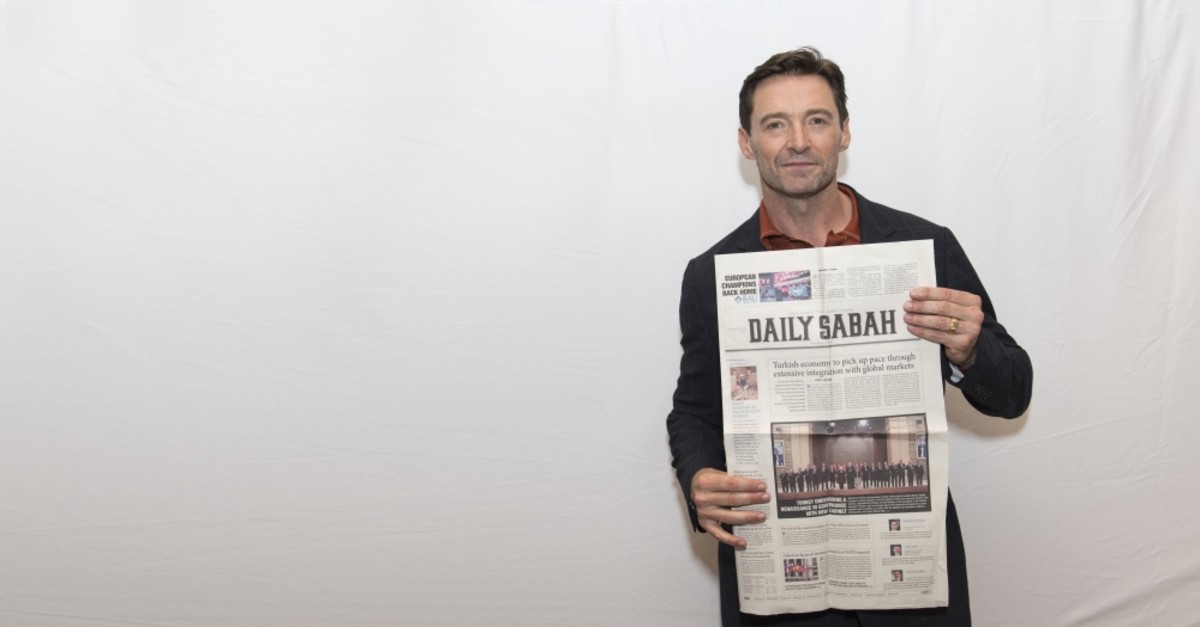 Daily Sabah conducted an interview with Hugh Jackman in Los Angeles.
by Barbaros Tapan
Feb 27, 2019 12:45 am

Enyoying the fruits of his fame, although he ‘never chased it,' Hugh Jackman is a successful actor who always consults his beloved wife in decision making

Hugh Jackman was born in Sydney, Australia on Oct. 12, 1968 to a family of British origin. He was the last born of Chris Jackman and Grace Watson's five children. When he was eight, his mother Watson moved to the U.K.

He was educated at Pymble Public School and then Knox Grammar School. Jackman graduated from the University of Technology Sydney's Department of Journalism. He was introduced to acting by chance: it was a required course for his department. He had a passion for handicrafts then and spent the money he inherited from a relative on training in this field. In 1994, he graduated from Edith Cowan University.

His first acting experiences were in the 1999 productions "Erskineville Kings" and "Paperback Hero." Those productions were later followed by the TV productions "Law of the Land," "Halifax f.p.," "Blue Heelers" and Snowy River: The McGregor Saga."

Jackman also performed on the theater stage and had a role in "Beauty and the Beast" and "Sunset Boulevard." The milestone for which he found fame beyond the boundaries of Australia was the representation of the play "Oklahoma!" where he starred in the leading role, in the U.K. The performance was filmed to be broadcast on TV and in DVD form.

The actor was included in the tryouts for the "X-Men" in 2002 at the last moment and was considered for a supporting role in the beginning. Dougray Scott had a contract for the role of Wolverine; however, he had to remove himself from the cast as the shooting of "Mission: Impossible" took longer than expected. As a result, Jackman got the role of Wolverine. In order to show the actor shorter, many tricks were used during the film's shootings. The success of the film made Jackman a world-famous actor. He also acted in the sequel films "X2: X-Men United" (2003) and "X-Men: The Last Stand" (2006).

In 2004, he was granted for Tony Award with his role in the Broadway production "The Boy from Oz." He was the presenter at the Tony Awards in 2004 and 2005. His success there brought an Emmy Award to the actor in the category of individual performance.

"Logan" (2017) was his last X-men film. We met the stage and screen actor Hugh Jackman in Los Angeles.

DAILY SABAH: You have always been very nice in interviews and you are known as one of the nicest men in Hollywood. Over the years, how have you learned to deal with the press?

HUGH JACKMAN: Actors and politicians are under the microscope. It's a completely different lens from where I stand. I'm sure there are some actors who find it suffocating and unbearable. I don't. I get nervous for my family. I'm fully aware I was 30 when I did "X-Men," so any kind of real profile didn't happen until I was 30. By 30, you know who you are, what you stand for, what's important to you. I went in with my eyes wide open. My kids were born into it. They have no choice. I protect them and I try my hardest to protect it for them. Fame is a weird thing. I never wanted. I never sought it. I didn't ask for it, but if someone was to say to you, "Here's a Lamborghini. I'm going to give you the keys to a Lamborghini but occasionally in your life there's going to be traffic. You still want the keys?" you're going to say "Yes!" and that's kind of how fame is for me.

DS.: It is the same with social media. Stars are now under the microscope for everything. You are a celebrity, and you have been married for such a long time. How can you lead a normal life without always feeling like you're under a microscope or being held accountable for what everybody else may do?

HJ: Don't read all the comments on your Instagram. That's the key for me. Don't read them all. I'm too thin-skinned. I'm being facetious. It's to some degree for me and for some other actors, and it's different for every actor. There's a choice involved. You know Frances McDormand really well. Last year, she won an Oscar, and she does hardly anything. Am I right? I've only heard that anecdotally. She will do very little, and she's very honest with filmmakers. "Listen, I'd love to be in your film or your play, I don't do a lot of press. I try and preserve my private life." If you're a politician you cannot, I believe, take that approach. You cannot say I'm closing off 97 percent of my life, but I'm still going to run for office. I just don't think that works. I've always loved the Socrates quote. I tell it to my kids all the time because they're on social media, and I'm sure they think that what they're doing is private. Then I say, "Look, remember what Socrates said, 'Never say privately what you wouldn't say publicly.'" Now all of us do say things privately we wouldn't say publicly. If you can sleep well at night with how you live, the choices you make, the things you say, then on another level, the thoughts you think, then you don't have to worry too much. So that's my sort of approach to it.

DS: Could you tell a little bit about your long association with Mont Blanc and also how the watches affect your personality?

HJ: I have been with Mont Blanc for about four or five years. I've loved it. The watches are very beautiful. I love the craftsmanship. I love their commitment to really bringing back the art of watchmaking. They're not the only ones but they do it very, very well. Everything you wear is a choice ultimately, and it's whatever that means to you.

DS: Let me follow up with "time." What does time mean to you? Do you see it differently now than before and how do you plan your free time?

HJ: Time is precious. I have turned 50, so a lot of people are talking to me about time. Don't worry, I'm not having a midlife crisis that I know of. Of course it's precious and I watch my kids grow up very, very quickly. My son just turned 18, which he reminds me of every time I ask him to do something, "I'm an adult now. I do what I want" (laughter). Life is a beautiful, magical thing and the only thing we can really control is our attitude to it. Different events happen to all of us, and time is no different. I see time like money. I see as energy. I see you can choose to spend it any way you like. That's my attitude toward time.

DS: I am following up on this. How many watches do you have? Do you have a prized possession like something that you want to pass down to your kids?

HJ: Honestly, it's probably about nine watches I would say. I am not a very materialistic person to be honest. I have a journal that was one of the greatest gifts my wife ever got me. When both of my children were born, she gave me a journal with their name on it so I've been writing in that for both of them, and I'll give it to them when they're 21. Throughout the years, I've written to them as though they were 21 years of age. I was flying somewhere recently, and my bag didn't come out and it eventually did come out but I waited a long time. I was like "whatever, fine" and all of a sudden it dawned onto me that the two journals were in there, and I went into a cold sweat. So that's probably a good example. If those got lost, I'd be very upset.

DS: What luxury is for you? What's the most luxurious thing you do and what do you do to unwind?

HJ: Freedom to me is the greatest luxury.

DS: Freedom from what?

HJ: Everything. Freedom to do what you would like to do. Freedom to some in this world is being free to drink water out of a tap. There's freedom of all different types, but freedom in general I would say is the greatest luxury. Materialistically, a pair of handmade shoes is pretty luxurious, and I've had two pairs in my life and putting those on is fantastic.

DS: You are very good at finding a life/work balance. How did you struggle over the years to get that to a point because you can't have it all? You must have to turn down things for your family. How does that work for you?

HJ: When we got married, we made a pact we would look at each other at every turning point; we would ask ourselves is this good or bad for our family. It seems to be a simple question. The family is the four of us. So it may be great for my career but terrible for the family or actually it may be a bit of a sacrifice for the family but really good for me. It is important for the kids to see their parents doing the thing they love. It's not necessarily an easy answer, but I would never have found the balance that I found if it wasn't for my wife because I can tell you at least seven or eight times in the last 25 years where my eyes have lit up with "Oh, this opportunity, that opportunity" and I just look over at my wife and she would just give me a look like, "No, this is not the time." She's just unbelievable with that. She's been in the business. She understands it. She understands opportunity when it's time for everyone. There's a time no one knows about when I was offered "Oklahoma" in London, and she was offered a spot at the very prestigious directing school of Victorian College of the Arts, and that's impossible to get into. There's two or three taken a year, very prestigious, and I said: "Well, we'll stay and she said no. Now, you need to go. We need to go to London, and you need to do 'Oklahoma.'" I never forget her selflessness in saying that because I know she always wanted to direct and that was a big moment for her. But when she looks at me like, "No, now is not the time," she is just the best barometer of that.

DS: You are a very sought-after actor in Hollywood. In the last two years, we saw you in superhero movies, one musical, a big one, a political thriller and a biopic. Do you want to try something else in the future, like a comedy maybe?

HJ: Yes, a horror movie, yes. More stage, yes. There's so much I want to do. I've always loved the variety in this business. I think it's a really exciting time to be an actor. There's unbelievable the amount of stuff being green lit. It's an incredible time. There are many new female directors coming into the business. I'm really excited. I'm enjoying acting more than ever so, yes, there's loads of stuff I'd like to do, but I'd better look at my wife first to see if I do that (laughter).