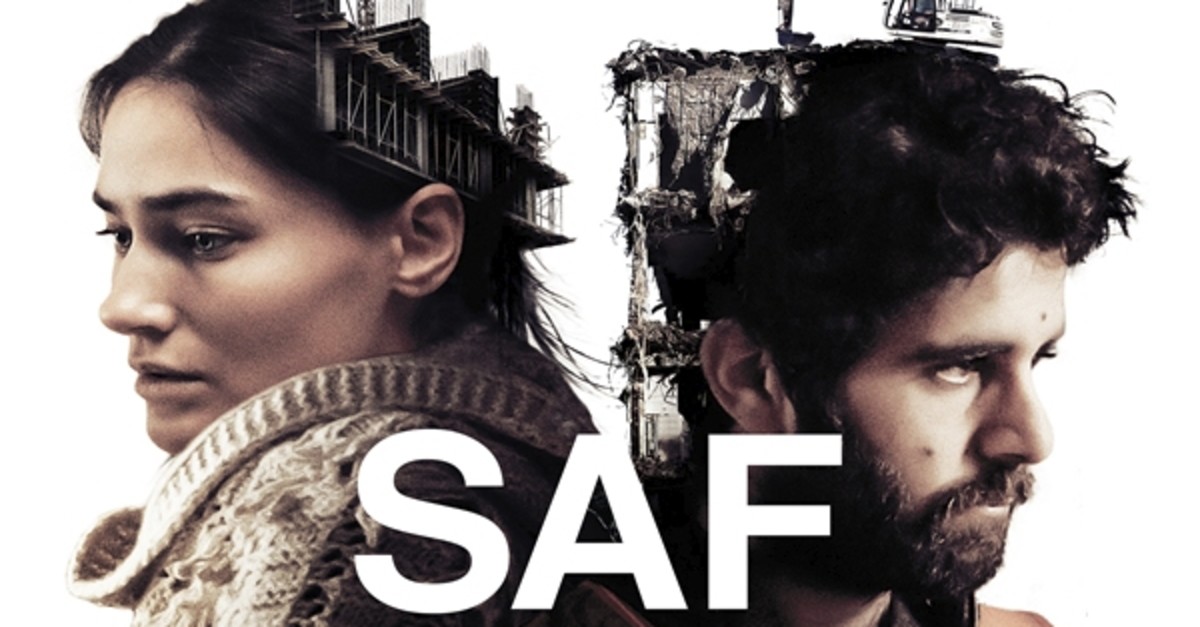 The film deals with a combination of issues like urban tranformation, labor and migration through the struggle of a couple.
by FİRDEVS BULUT Apr 09, 2019 12:03 am

Can we remain 'saf' ('pure') while we are surrounded by hate, frustration and the constant struggle to survive?

I recently saw the movie "Saf," meaning "pure" in English, at the Human Rights Watch Film Festival in London in March. "Saf," directed by Ali Vatansever, is a human story in its realest sense and it is set in Istanbul. The film focuses on urban transformation, construction, transforming spaces and people, issues of immigration and new encounters with "the other" - and the last few decades Istanbul have seen a melting pot of all these and more. Starting with heavy and disturbing construction sound in the background, the movie hooks you in its first few seconds - especially if you have spent some time in Istanbul - or live there. Having been born and raised in Istanbul, having talked to, laughed with and become neighbors with the very people portrayed in this film, I can positively say that the movie felt like home, together with the beauty and sorrow that come with it.

The film is set in the Fikirtepe district of Istanbul, one of the areas where urban transformation is sweeping the entire area to crowd it with huge residences. Poor communities living in the area are affected by this process very harshly, mostly having to evacuate their houses and be given new residencies. Presumably, a good chunk of this poor community settled in Fikirtepe is comprised of Syrian refugees who take shelter in the abandoned buildings in districts like this. The film brings all this together: While our two protagonists, Kamil and Remziye are fighting to stay in their homes on the one hand, in order to support his wife, Kamil has to work on these construction sites that face their self-built home in the slums of Fikirtepe.

The film starts with a conflict. On the construction site, while Kamil waits to be accepted by the employers, a fight breaks out among the people waiting for the same job: A Syrian man waiting for a job is attacked by a Turkish worker, accusing him of "coming to the country and stealing their bread." By now in 2019, we can easily say that this sentence is a universal declaration of racism and xenophobia, and although actors who voice this sentiment change, the rhetoric is always the same. Immigrants, who flee their hometowns and come to our countries, are off to do something bad here. Although in Turkey there is great sympathy and a feeling of hospitality toward Syrian refugees, what happens on the street or on a construction site where people are literally fighting for bread, can be very different. And the film is very successful in showing these momentary, almost instantaneous episodes of human interactions.

But the conflict does not stop here. Kamil gets a job on the construction site, but he gets the job of a Syrian man previously working in his position. The employers believe that "it is better for the money to go to one of them instead of Syrians," so they accept Kamil even though he does not have a license for the machine he will be operating. Knowing that he stole another man's job, Kamil takes pity on a Syrian guy, Ammar, and starts carrying food to his home in an abandoned building. We feel for both Kamil and Ammar on so many levels, while at the same time witnessing the emotional transformation of Kamil. While being a guy "from whom no harm could come to anybody," according to his wife Remziye, Kamil starts to become paranoid about the possibility of Ammar taking his job back, leaving him unemployed again. Imagine carrying food to someone's house because you take pity on them, but at the same time plotting behind their back to keep the job you actually stole from them: this is Kamil's transformation from a selfless human to someone who puts himself first. And as we come to observe more clearly as the plot unfolds, the brutal and soulless transformation of the face of this district into a pile of stones is not separable from the psychological transformation of these people.

TRANSFORMATION OF CITY AND MIND

Kamil is not the only one who goes through this transformation. At the big house she works in, Remziye has to grapple with a hard decision: Find a reason to have the Polish nanny, Ivona, working at the same house sacked and get the job for herself, or simply let her be. She finds herself genuinely questioning this and justifying her motives to falsely accuse Ivona of something and stealing the job for herself. And one of these justifications is in the lines of "she is not working legally here anyways." Both Kamil and Remziye were people who lived their lives without bothering anyone, without getting in trouble. The film is very successful at bringing the plot slowly to the point where we can in fact see the influence of space and environment on the people's lives and the way they seek solutions to their problems.

When Kamil suddenly disappears, it falls upon Remziye to track him down. Working as a cleaning lady in a house in a very rich neighborhood, Remziye starts her search by going to the police and then to the construction site that Kamil works. Sadly, she finds out in a few days that her husband is dead. When she hears something about a Syrian guy, who is in fact now imprisoned, she makes her way to the prison and finds Ammar. We learn that Kamil plotted against Ammar, tried to kill him and then fell off the building himself. Here again, the changing nature of Kamil from a very nice man to someone who would consider killing another is emphasized. Kamil falls into the trap he sets for Ammar.

The film plays very well on the very minor but important aspects of Turkish daily culture. For instance, Kamil buys a radio for their small garden where they grow some vegetables, because he once sees on TV that playing the Quran helps them grow quicker. This takes me back to my own village in the small city of Balıkesir, where my grandfather used to say the exact same thing.

I would also like to congratulate the director for his cautiousness about another aspect of Turkish life: table manners. Remziye and Kamil invite their friends over for dinner, and when they are having their soup, it is impossible to overlook one small detail: Remziye keeps wiping her mouth with a piece of bread whenever she takes a sip from the soup. This is one of the most Turkish things that one could imagine, I am pretty sure everyone who was brought up in a small Turkish household has seen this happen once in their lifetime. Personally it has been a very long time since I have seen this, and encountering this over and over again in the film both made me feel a bit bizarre about this behavior, but at the same time bringing up the same dilemma that it felt like home again.

So what does "Saf" tell us about ourselves? The first and foremost question the film deals with is, "Can we remain selfless human beings while we are surrounded by hatred and fear? What is left of our humanity when it is all over?" Dealing with issues of immigration and construction in the context of an enormous city such as Istanbul is not an easy job, and there are a lot more aspects to be taken into account. This fact is also reflected very beautifully in the name chosen for the movie. "Saf" means "pure" in Turkish, but especially in the spoken language, it can also mean "naive," or even "foolish." Which side of "saf" were Kamil and Remziye on and which side of "saf" was the Syrian man Ammar on?