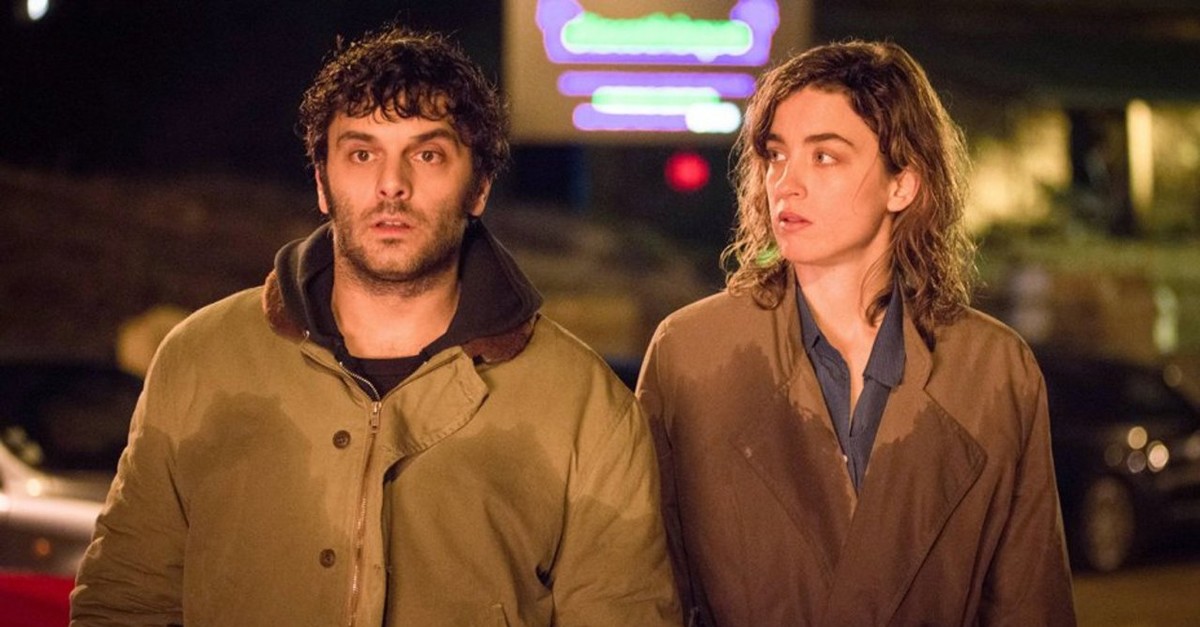 Adele Haenel and Pio Marmai as Yvonne and Antoine in the film.
by Zeynep Esra İstanbullu May 07, 2019 12:04 am

Cinema conveys a wide variety of powerful messages and can leave unforgettable impressions with some movies. However, you sometimes just need to have some fun, laugh out loud and see some scenery. It is also an escape from the burden of life for an hour or two. If this is what you are looking for, writer-director Pierre Salvadori's "En Liberte!" ("The Trouble with You") has hit Turkish theaters. It is a burlesque comedy bearing hints of a nostalgic Hollywood touch with its pace of action and elements of a comic-book style narrative, especially in its flashbacks. A laid back film that doesn't linger in the mind when it is over, everyone needs a break like this occasionally.

The film opens with the touching and epic loss of a police chief who is posthumously honored by his division with a bronze statue with his wife Yvonne, his partner Louis and many colleagues in attendance at a ceremony. This is also the same epic way his wife remembers him and tells fairy tales to her son about his deceased father: Exaggerated and heroic stories depicted in a vintage, noisy and ironic tone. The way Yvonne, acted by Adele Haenel, tells these stories changes direction every other night as she learns the real facts about her husband, who was a corrupt policeman involved in merciless crimes for money. She tries to get over this shock and honor the memory of her husband and compensates a victim of his.

Played by Pio Marmai, Antoine, who is bound to open a new perspective in Yvonne's life, is a young, attractive man who has just completed an eight-year sentence after being used by the corrupt police chief in the jewelry shop he was working at. He has lost eight years in vain, is now aiming to get revenge and carries an entitled air as if the world owes him something. He is sympathetic and funny on one hand while unpredictably dangerous when angry on the other. Yvonne follows him to cover his tracks so he does not go back to prison and relieves her guilt caused by her deceased husband. A sweet and subtle romance happens between them despite the fact that she has already started some kind of relationship with her husband's former police partner, Louis.

There is a fourth person in the complicated love story: Antoine's loyal spouse Agnes played by Audrey Tautou. Though a relatively slight role compared to the other three, she has obviously contributed much with her acting experience and meaningful gestures. I would rather see her as a more central and influential character, but even in this role she touches hearts with her authenticity.

Complementing their attractiveness with great acting, you cannot take your eyes off Marmai and Haenel. The director makes use of Haenel's beautiful face and green eyes with close-ups in emotional scenes and Marmai' toned body in action scenes. There is an overall high standard of physical beauty with Tautou, Marmai and Haenel, combined with the serene panorama of the French Riviera town where the story takes place. So, I need to confess that beauty is an indispensable part of the film.

The other is the incessant action that drives you away when the mystery about Antoine disentangles. It is not an unpredictable story, on the contrary, it is quite predictable, superficial and cheesy at some points, but you do not feel the need to be pushed to solve its mysteries. It is quite smooth, enjoyable to watch and optimistic in the end. Plus, you cannot help but laugh at a few scenes, which is what we all need after a long day at work.

All in all, though not highly intriguing, artistic or unpredictable, "En Liberte!" is a nice getaway from the daily hustle, surrounding you with physical and natural beauty and good acting while inspiring a welcome smile here and there along the way.