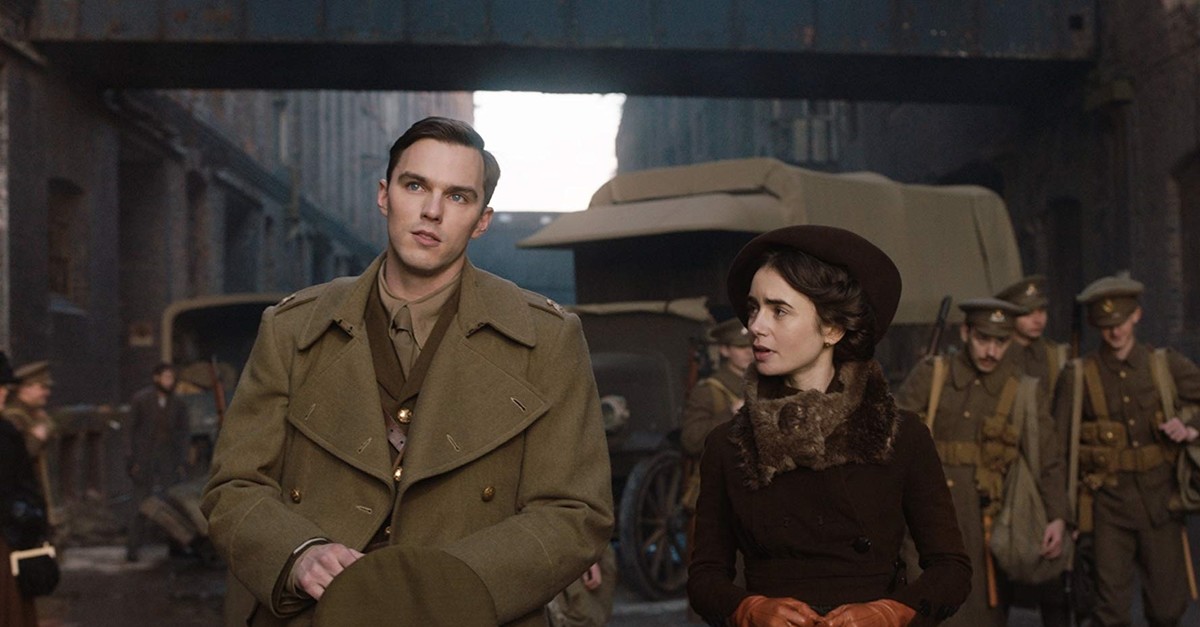 Tolkien and his love of life, Edith, played by Nicholas Hoult and Lilly Collins.
by Nagihan Haliloğlu May 20, 2019 12:13 am

There are some names that will sell any product. And when that product is within the realm of storytelling, Tolkien's name will get you very far. Having visited an excellent Tolkien exhibition at the Bodleian Library in Oxford last year, I thought I was relatively well-acquainted with his life, and was curious to see what director Dome Karukoski would do with the material. It turns out he hasn't done much with it at all.

The film opens in the well-trodden (in novels, films and elsewhere) trenches of WWI where Tolkien is trying to reach one of his comrades. We are treated to an above-standard recreation of the wooden walls, the bogs and the wires. And as Nicholas Hoult's Tolkien walks towards us, I keep thinking he looks exactly like Benedict Cumberbatch in "Parade's End." I even wonder if they've used the same set, extras and possibly the same uniform.

This feeling of watching bits from other films never quite goes away throughout the two hours I sit at the cinema. The film continues with Tolkien's flashbacks to a more innocent, sweeter time in good old England, and particularly the boarding house where he and his brother lodge after their mother - Laura Donnelly is quite the gem as Mabel Tolkien - dies. As Tolkien and another inmate of this boarding house, the love of his life, Edith, run down the mahogany stairs and wall panels, I seem to have my own flashbacks, to possibly some Harry Potter film, the content and name of which I have long forgotten. But the atmosphere is the same - young people frolicking in a wooded and paneled environment that works wonders on their young brains, their magical and storytelling abilities.

Young Tolkien is initially not very much liked at school, primarily because he is very good at languages. He is not the South African dunce he is supposed be. This colonial connection was what had intrigued me most at the exhibition I'd seen. It is a connection that the film makes nothing of, apart from a joke about how Tolkien has left his shield and/or spear behind. As a source of inspiration for what Tolkien would come to write, the South African connection, I think, could have been an interesting angle for Karukoski. But he persists in always going for the most obvious associations for the raw material for "The Lord of the Rings." After a very brief period of antagonism with the boys in his class that almost introduces an element of tension in this telling of Tolkien's life story, he becomes fast friends with four boys. They go on trips to the town, Birmingham, together and hold forth on literary matters at a teashop clearly with an eye to attracting attention to themselves and their intellectual prowess. This "brotherhood," of course, is supposed to mirror the brotherhood of the ring - one of the boys even looks a bit like Sean Austin's Sam Gamgee.

THE LOVE OF TOLKIEN'S LIFEThe other moment of slight tension - we are clutching at straws here - arises when Tolkien tries to bring his two worlds of intellectual and romantic exploration together. He takes Edith to one of their literary soirees and when she starts to have a hearty conversation with one of Tolkien's friends who is a musician, the young lover gets all frustrated and calls the evening to an end. I believe this scene is inserted to make us understand how strong Tolkien's feelings are for Edith. Having a conversation with one of your friends? Enough to make a man's blood boil! We are shown that his machismo - or whatever you want to call it - gets its comeuppance when he fails to get together enough money to get them into a performance of Wagner's "Ring Cycle." We get a brief summary of the opera's plot as they're waiting in line and get acquainted with "the power of the ring." Tolkien's injured masculinity is then naturally nursed by Edith who manages, somehow, to lead them to a backyard where the opera keep their extra props. They listen to the performance there, with Edith and Tolkien acting out the parts, and "having more fun than they would had they been able to get inside the auditorium." Now all is well between them and their future life together is sealed with a kiss. It is these ready-made narratives that make "Tolkien" a bit of a bore.

Things cool between the two lovers when Tolkien goes down to Oxford where he does not do quite as well in classics as he ought to, and is threatened with being being sent down (although really, he will be sent up to Birmingham; we have to bear with these Anglicisms). A modern day Gandalf comes to his aide in the guise of the philology professor Joseph Wright, played by Derek Jacobi. Philology may not have the prestige of classics, but under Wright's tutelage Tolkien manages to stay in Oxford in the company of his friends. Karukoski has a go at showing the merry band "behaving badly," which consists of hanging out with some girls in an abandoned bus.

"Brideshead Revisited" this ain't. We are given to understand that Tolkien excels at languages, makes up whole new ones (in an earlier scene he boasts of this to Edith), but we get precious little time with him at his desk, drawing out how these languages work. We get shots of the wall above his desk, dense with jottings and drawings, but we do not know how they all add up in his head or whether there is any connection between them. And before any of this can be put in writing, WWI erupts. This is one of the most poignant moments of the film, as professor Wright and Tolkien are discussing a finer linguistic point, someone comes into the quad and announces the news. Then we see the undergrads jumping in the air and hugging one another for joy. So many young people thinking it sweet and proper to die for their country, not least as a result of the classical education they get.

Narrative shortcuts, paper-thin characterizations and referencing other fantasy-fiction films bordering on pastiche recur throughout. These don't, however, completely take away from the joy of watching beautiful English scenery, interiors and young people. It's a good film if you want to bask under the English sun, be treated scenes of high tea and learn the basics of Tolkien's biography. But for an insight into how Tolkien's mind worked, we'll have to wait for the next biopic.