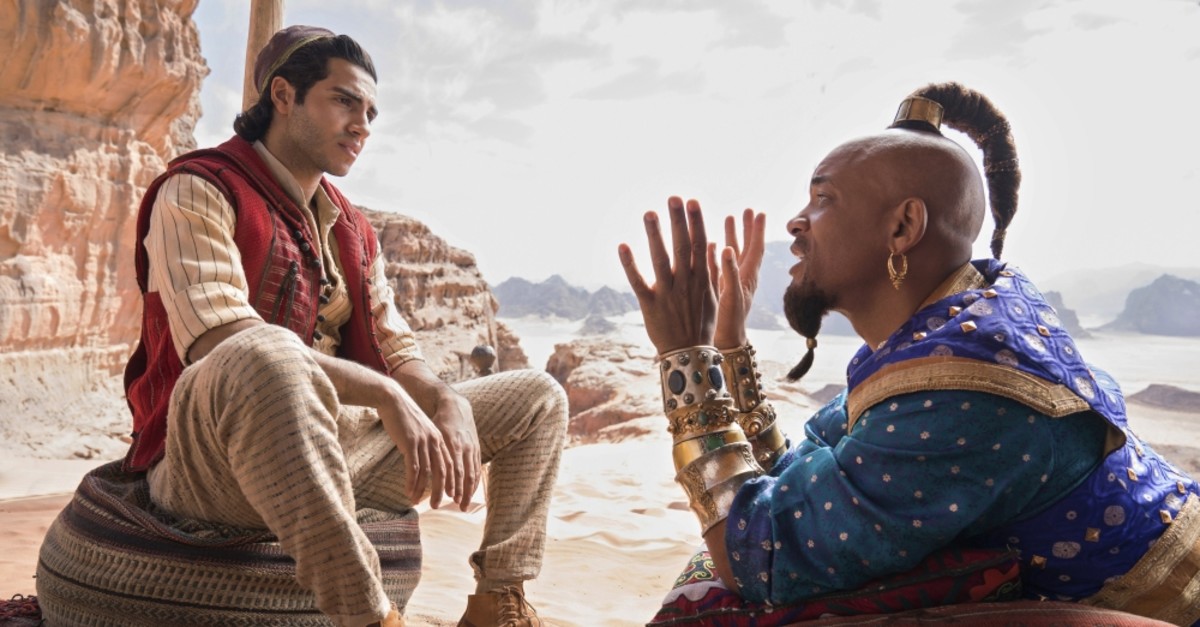 Adults might sometimes need fairy tales, too. Acclaimed director Guy Ritchie's latest, a new genre for him, is a Disney production, a remake of the world-renowned "Aladdin" tale. To be honest, I would not be excited to see "Aladdin" if it were not Ritchie. Fans loyal to the widely known 1992 version will not be disappointed as the plot features slight changes, flowing in parallel to the original. Still, there are a few points worth pondering.

As an easily predictable strategy, Disney has invested in high-tech movie versions of fairy tales like "Beauty and the Beast," and has harvested considerable profit out of such productions. It is not risky as they focus on universal stories already known and loved by filmgoers, and there is not much risk of spectators leaving the cinema hall in the middle of the film. There are colorful images, 3-D graphics, well-known characters and a sound flow of action natural to fairy tales. In technical terms, Guy Ritchie seems to have passed a new test, but the script is not without its deficiencies and confusing moments.

The story is classic; the street rat Aladdin's path crosses with the beautiful Princess Jasmin in a bazaar, and they share a mutual attraction. However, the princess can only marry a prince - a dream that will later come true with the help of the genie, while they have to struggle against the villainous vizier Jafar, whose only aim is to replace the king.

Sadly, not only social realistic films, but also fairy tales fall victim to a faulty, neglectful and indifferent perspectives related to the East. Eastern cultures are usually portrayed as if they all dance, react and think in the same way. From a Western point of view, especially if religion is in common, the lines of culture-specific traits blur in an uncontrolled way. I am not a literary expert and am aware that the original story does not specify strict borders on a real map, but it has been hinted to be set an Arabic city in literature and productions. In fact, the scriptwriter, for instance, could have chosen to make it an Indian city in the remake. However, what opens like a typical Arabic city in architecture, decoration and cultural traits is later blurred with Indian stereotypes. Especially the ladies' costumes that resemble those of Indian women in color, cut and make-up. What cuts a swathe is the group dance scenes featuring a group of men and women dancing in harmony with well-organized choreography; aesthetic and admirable, but totally Indian. A third contradiction comes in the wedding scene led by an Islamic scholar but completely conducted in a Christian way. Such confusion might be usual for Aladdin narratives up to now, but I would expect a keen eye like Ritchie's to eliminate them and narrow down on a cleaner path.

Another orientalist stereotype appears among the commoners talking in the streets and at the bazaar. They speak English with a clumsy accent though all the characters speak English fluently. While Aladdin, Jasmin and the genie sound like native speakers, ordinary citizens speaking with horrible accents is a cheesy trick that has nothing to do with the usual quality of Ritchie's films.

After this disappointment, Ritchie conquers hearts through empowering the princess with a rebellion against her father's vizier, who gets his hands on the magical lamp and takes over the ruling power by deceit. She stands up against a thousand-year-old tradition that silences women, even women of royal blood, and diminishes them to nothing but domestic, incapable and secondary entities. Though I am not a fan of musicals, the director inspires goose bumps with the piece "Speechless," performed amazingly by the princess, who rises up against the male-dominated system. Ritchie points to a feminist undertone with this intentional touch. The princess is such a strong, smart and assertive character that she overshadows the genie and everyone else.

The casting is appropriate for a Middle Eastern story, consisting of Mena Massoud as Aladdin, Naomi Scott as Jasmin, Marwan Kenzari as Jafar, breaking the ridiculous custom of casting pale white actors in Eastern stories. Will Smith, with all his sincere and energetic style, brings a new breath to the genie. We have seen him in more demanding roles pushing his boundaries before, undoubtedly, but he does what the role requires, in my opinion. It was pleasant to watch his smiling face and charming attitude throughout the film.

Before finishing, just keep in mind that there is a new violent scene toward the end. The vizier tortures the king in a dark and merciless manner, which could potentially frighten young viewers.