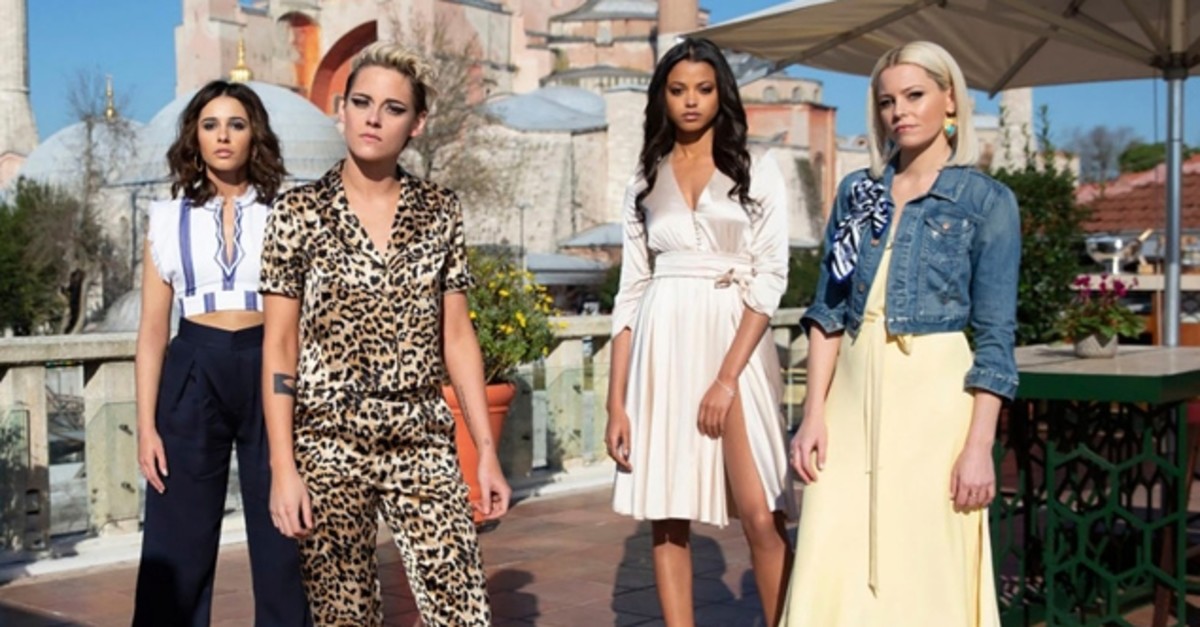 The new angels have landed. All six of them.

The wig- and action-packed teaser introduces stars Kristen Stewart, Ella Balinska and Naomi Scott as the crime-fighting trio on screen, as well as recording artists Miley Cyrus, Ariana Grande and Lana Del Rey as the pop angels featured on the film's soundtrack.

Because Cyrus, Grande and Del Rey are the supergroup we need right now. Grande also was co-executive producer on the soundtrack.

This musical power trio, previewing defiant lyrics such as "Don't Call Me Angel," steps into the role once occupied by Destiny's Child, who provided the "Independent Women" anthem for the 2000 film starring Cameron Diaz, Lucy Liu and Drew Barrymore.

The new single features a ring-a-ding intro and is spliced and diced throughout the trailer.

Banks ("Pitch Perfect 2") also takes on a fourth role in the female-led action flick: She's the beloved Bosley, an associate of Charles Townsend, who directly interacts with the Angels.

The edgy Sabina (Stewart) runs field operations and beats down a misogynist who steals humanitarian-aid money. The stealth Jane (Balinska) is a former MI-6 operative disguised as a waitress who can deoxygenate a man's brain with a single touch. And the green Elena (Scott) is taken under their wing because she's a lead programmer on a product that can revolutionize the power industry. Her product, alas, can also be weaponized.

Enter Banks' ever-chic Bosley, who tells the "lady spies" that the Townsend Agency she fronts exists because "traditional law enforcement can't keep up." She tricks out the team with wigs, high-tech toys and glam costumes in just one of the agency's gear closets.

But she's not the only Bosley. There are now teams of Angels guided by multiple Bosleys taking on jobs around the world. Patrick Stewart and Djimon Hounsou are among them.

Charlie, the mysterious man behind the global security and investigative agency, also drops in via the franchise's iconic speaker box.

The film, based on the popular TV series of the 1970s, celebrates female empowerment, which originally attracted Banks to the project.

The 2000 film was directed by McG and became a runaway hit, making 264 million dollars at the global box office. But its 2003 follow-up, "Charlie's Angels: Full Throttle," and short-lived 2011 TV series didn't fare nearly as well.