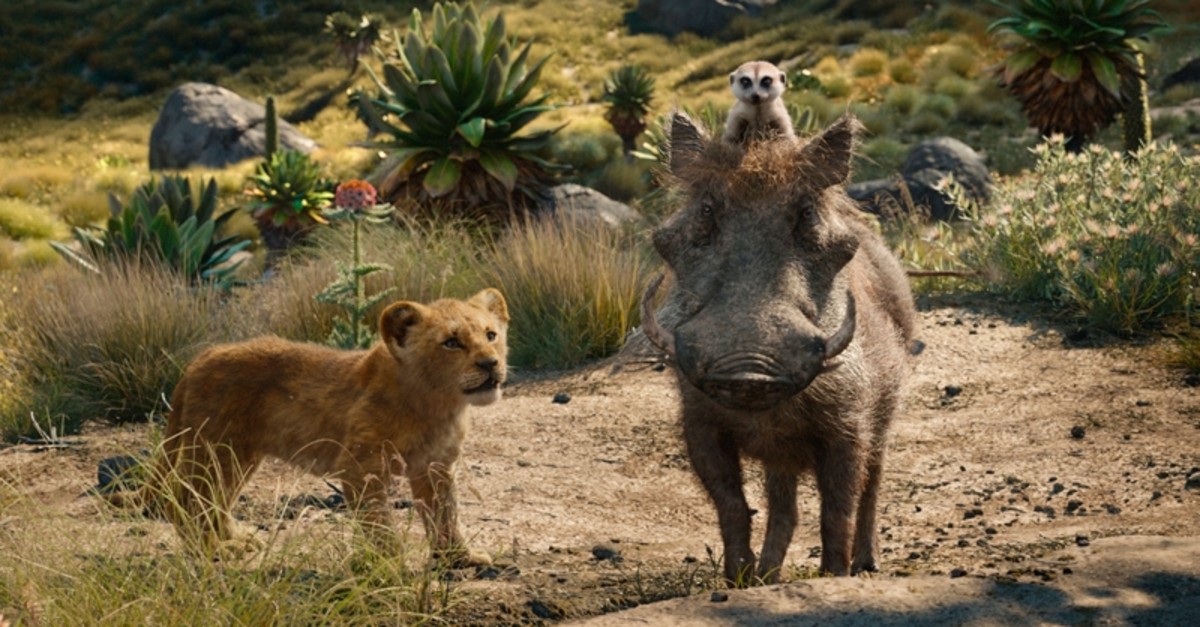 This file image released by Disney shows, from left, young Simba, voiced by JD McCrary, Timon, voiced by Billy Eichner, and Pumbaa, voiced by Seth Rogen, in a scene from ,The Lion King., (AP Photo)
by Compiled from Wire Services Jul 21, 2019 7:28 pm
The Walt Disney Co. is ruling the box office again with the record-breaking debut of "The Lion King" this weekend.

The studio said Sunday that the photorealistic remake devoured an estimated $185 million in ticket sales from 4,725 North American locations. It's a record for the month of July and PG-rated films, and the ninth-highest opening of all time.

That figure represents the second-best domestic debut of the year behind Disney and Marvel's "Avengers: Endgame" ($357 million). It also marks the biggest opening yet for a Disney remake of its original cartoons.

Overseas, "The Lion King" felt the love with $269 million for a global start of $433 million. The film launched in China last weekend and has since earned $98 million, boosting the worldwide haul to $531 million.

No other studio even dared to go up against "The Lion King" with a major release.

The state-of-the-art technology used to bring the Pride Lands and its inhabitants to life drew a polarizing response from reviewers, but the newest version of Disney's crown jewel proved to be critic-proof. Moviegoers flocked en masse to see Simba's grand return to the big screen, and to much enthusiasm. "The Lion King" holds an A CinemaScore. Audiences also shelled out to see the hyper-realistic movie in the best quality possible. Imax theaters accounted for $9 million of tickets sold, while $25 million came from 3D screens.

"The Lion King" provided a much-needed jolt to the domestic box office. Heading into the weekend, box office receipts were pacing over 9% behind last year. But the prospect of hearing Donald Glover's Simba and Beyonce's Nala harmonize to Disney classics was irresistible. Now, theatrical earnings are down just over 7%, according to Comscore.

As for Disney's past reboots, 2017's "Beauty and the Beast" bowed with $174 million, while 2010's "Alice in Wonderland" launched with $116 million. In 2016, Favreau's "The Jungle Book" earned $103 million in its inaugural weekend. "The Lion King" is the third classic Disney cartoon to get a big-screen makeover this year. In May, Guy Richie's "Aladdin" debuted with $91.5 million. Earlier this year, Tim Burton's "Dumbo" kicked off with $45 million.

In a banner weekend for Disney, the studio is now home to the highest-grossing movie in history. "Avengers: Endgame" crossed $2.7892 billion at the global box office, officially dethroning James Cameron's "Avatar."

Since other Hollywood studios refrained from release a movie against "The Lion King," a number of holdovers filled out domestic box office charts. In a distant second place, Sony's "Spider-Man: Far From Home" collected $21 million during its third weekend in theaters, lifting domestic ticket sales to $319 million. The web-slinging superhero adventure has generated $569 million at the international box office.

Disney and Pixar's "Toy Story 4" landed in third, adding $14 million from its fifth outing. That boosts revenues for the animated fourquel to $375 million in North America.

At No. 4, Paramount's alligator thriller "Crawl" generated $6 million for a domestic tally of $23 million. Rounding out the top five is Universal's musical rom-com "Yesterday," which pocketed $5.1 million during its fourth weekend of release. The movie has grossed $57.5 million to date.