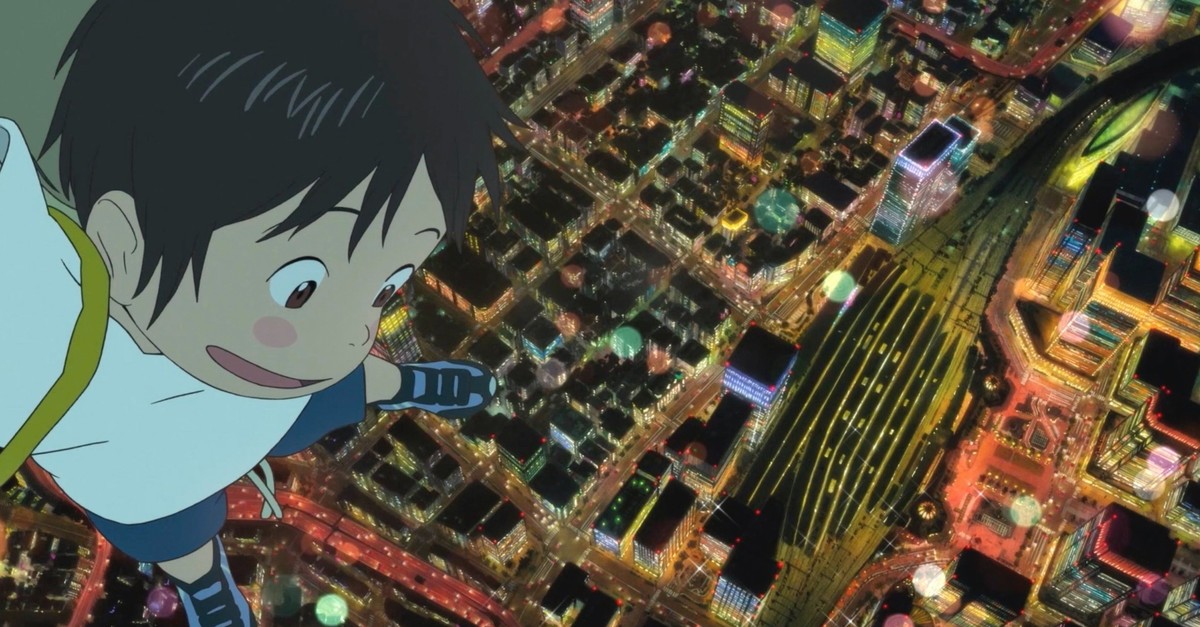 To be held with a view to enabling equal participation in cultural life, the 7th Accessible Film Festival is meeting moviegoers with its program featuring some of the best examples of Turkish and world cinema

The Accessible Film Festival , which seeks to remove obstacles to participation in cultural and artistic activities, offers a number of side events in accordance with the idea of accessibility for visually and hearing impaired individuals, as well as film screenings. The seventh edition of the festival is hosting cinemagoers at Boğaziçi University's Cinema Hall (SineBu) in Istanbul, between Oct. 7-9. It will continue at Yunus Emre Cultural Center in Eskişehir province between Oct. 11 and 13, and at the Çankaya Municipality Contemporary Arts Center and the Goethe-Institut in Ankara between Oct. 16 and 20.

The festival's program coordinator Ezgi Yalınalp explained the story of this festival, which makes everything on offer possible to watch together. "The Accessible Film Festival was organized for the first time in 2013. Festival Director Emrah Kalan, Kıvanç Yalçıner and I were working together before this year. In some of our festivals, several films were screened with audio description. Audiences who wanted to watch the film in its original form did not prefer these screenings because the sound describing what was happening in the movie that we call the voice description was given to the hall. We asked the question whether it was possible to have an inclusive film festival that everyone could follow together, and we found that it was possible. This is how we started to hold the Accessible Film Festival."

Noting that the festival drew great attention in its first year, the festival's general coordinator Kıvanç Yalçıner continued, "This interest has increased a little more each year. The first four years, it took place only in Ankara, and it has been visiting Istanbul and Eskişehir for three years. Since this year, the festival has proved its competence internationally as part of an international network. We have become one of the founders of the Be In Accessible Festivals Network, consisting of seven different accessible film festivals operating in Europe. As part of this network, we will undertake various joint projects about access to cinema in the coming period."

The program coordinator told the media that this year's program for the Accessible Film Festival consists of a total of 10 thematic titles which have 48 films, including those added this year, such as "Eccentric Grass," "Guide Dogs," "Be In!," "Nothing For Us, Without Us!," "Who Says?," in addition to those which are presented every year such as "Competition Without Barriers," "From the World," "For Children," "The Long and Short of it" and an "Autism-Friendly Screening." All films in the program of the Accessible Film Festival are shown with audio descriptions for visually-impaired participants, and with sign language and detailed subtitles for the hearing impaired. In addition to screenings at the festival, post-screening interviews and workshops with film crews are also accompanied by a sign language translator. Sign language translation and audio descriptions will be held at the award ceremony of the festival, which is scheduled for Oct. 19. In this way, all cinema lovers with and without disabilities will be able to follow the festival together.

"Competition Without Barriers," featuring productions that have made tremendous impact in many national and international festivals, includes "Anons" ("Announcement") by Mahmut Fazıl Coşkun, "Güvercin" ("The Pegion") by Banu Sıvacı, "Saf" ("Pure") by Ali Vatansever, "Sibel" by Guillaume Giovanetti and Çağla Zencirci and "Yuva" ("Home") by Emre Yeksan. This year's jury of the "Competition Without Barriers" includes art director Natali Yeres, producer Yonca Ertürk and film writer Burak Göral. The Best Picture, Best Director and Best Screenplay" awards to be determined by prominent figures from the movie industry and a Special Audience Award to be determined by the audience by the ballots printed in the Braille alphabet will be presented to the winners at an awards ceremony in the Goethe-Institut Ankara on the evening of Oct. 19.

The Couch Grass selection, which highlights characters who are ostracized, who isolate themselves or who struggle to their disability, consists of a total of nine films including Turkish productions.

The selection includes "Don't Worry, He Won't Get Far on Foot" by Gus Van Sant, "Draußen In Meinem Kopf" ("The World Beyond My Head") by Eibe Maleen Krebs, "Neko no Hi" ("Cat Days") by Jon Frickey, "Yulubidyi - Until The End" by Nathan Mewett and Curtis Taylor, "Shock Therapy" by Bali Engel and Matthieu Landour, "Downside Up" by Peter Ghesquiere, "İki Elin Arasında" "In Between Two Lines" by Osman Yazıcı, "The Pocket Man" by Ana Chubinidze and "Just! Just, Go!" by Pavel Gumennikov.

Featuring films telling characters from different groups who free themselves from the obstacles they experiencee through art, the selection called Who Says? will present film lovers "Andre The Anti-Giant" by Kim Saltarski, "Carlotta's Face" by Valentin Riedl and Frédéric Schuld, "Diamonds For My Ants" by Karina Vilenkina, "Kendis" by Bibi Fadlalla, "Partially Compensated" by Krista Weltner and "Breaking Ballroom" by Dragana Njegic.Guide Dogs

Among the highlights of this year's program for the Accessible Film Festival is a selection called Guide Dogs. The selection consists of films about how our specially trained intelligent friends make our lives easier and the special relationship we have built with them. 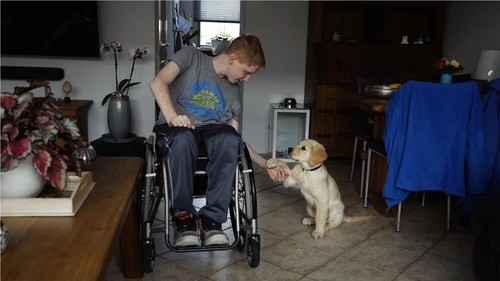 "Scott & Julia" by Annelies Kruk in the selection for Guide Dogs is about a specially trained dog friend.

The selection includes "Buddy" by Heddy Honigmann, "Pip" by Bruno Simões, "Guide Dog" by Bill Plympton, "Scott & Julia" by Annelies Kruk and "Pick Of The Litter" by Don Hardy and Dana Nachman.

Nothing For Us, Without Us!

The selection of films called For Us, Never Without Us!, featuring struggles staged for accessibility, includes "Taking Back The Waves" by Genevieve Clay-Smith and "The Fight" by Violeta Ayala and Daniel Fallshaw.

The selection named From World, featuring the recent most prominent productions of the world cinema, includes "Cold War" by Pawel Pawlikowski, who won the "Best Director" award at Cannes, "Beast" by Michael Pearce, who won the 2019 British Academy of Film and Television Arts (BAFTA) for Outstanding Debut, and "Gräns" ("Border") by Ali Abbasi who won the top prize in the 2018 Cannes Film Festival's Un Certain Regard competition.

The selection titled For Children, which will boost the imagination of children who are source of inspiration for future generations, consists of "Mirai" by successful animator and director Mamoru Hosodawhich has been nominated for Oscar, "The Queen's Corgi" directed by Vincent Kesteloot and Ben Stassen and "Hodja fra Pjort" ("Up and Away") by Danish director Karsten Kiilerich.

The Long and Short of it

The Autism-Friendly Screening selection, which allows children and young people with autism to watch movies in a comfortable way, will show "Mirai" by Mamoru Hosoda, a successful director of Japanese animation. The film will be shown in a dim hall, with the volume kept low, while the audience will be able to have food and drink in the hall during the screening and move about as they wish.

Be in! Short Film Selection

The Be in! Short Film Selection has been prepared by "Be in! A Network of Accessible Festivals," which was founded by six film festivals operating in Europe with a view to expanding access to cinema. The selection includes short films of "An Elephant on the Moon" by Benjamin Barthélémy, "A Safe Place to Rest" by Ray Jacobs, "The Bird Has No Wings" by Mert Tugen, "Macropolis" by Joel Simon, "Miedo" by Carlos De Antonio and "Coldstar" by Kai Stänicke.

Ezgi Yalınalp added a final note about the festival: "Apart from the film selections, we try to feed the program with various side events. Virtual Reality Experiences, which will allow us to get closer to the lives of people with disabilities, the Animation Workshop, where hearing-impaired children learn to make stop-motion movies, and the Autism Friendly Screening that will enable children with autism to watch movies in a comfortable environment, continue this year as well."