'About Endlessness': A black comedy devoid of humor 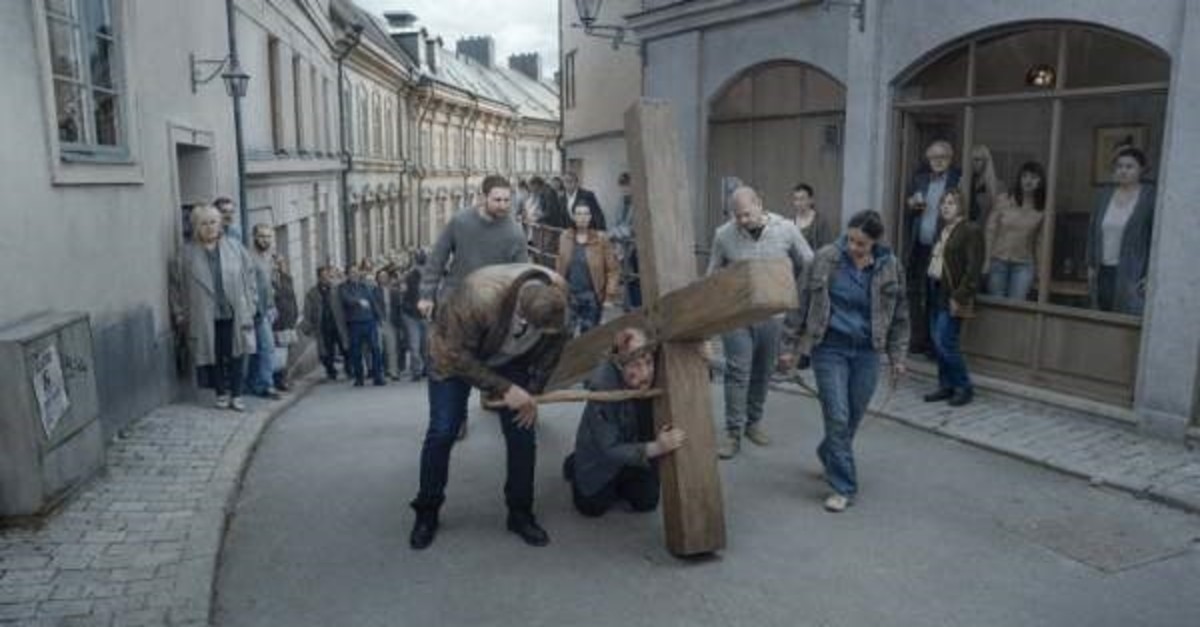 A scene from ,About Endlessness, depicting the priest bearing a huge cross and being tortured by passersby.
by Zeynep Esra İstanbullu Oct 11, 2019 10:58 pm

Having brought together film lovers with the best art house films for years, Başka Sinema has organized a second Başka Sinema Ayvalık Film Festival this year from Oct. 4 to 0ct. 9. The event offers a serene autumn feel in the magically beautiful coastal town of Ayvalık, located on the Aegean coast just across from Greek waters. The summer season has ended, and the town has surrendered itself to the arms of cinema with people from other cities flocking to see highlighted, award-winning art house films that remind viewers of what it means to be alive.

Among the many films from Turkey and abroad, undoubtedly one of the most striking was Roy Andersson’s “About Endlessness.” Andersson, a 74-year-old Swedish director, gained a considerable fan base with “The Second Floor” in 2000 and “A Pigeon Sat on a Branch Reflecting on Existence,” which brought home the Golden Lion at the International Venice Film Festival. There are two indispensable elements in his works: black comedy and existential crises. Having produced commercials, he is not an ambitious movie director who dedicated his whole life to cinema, Andersson still creates works that shake audiences with deep-rooted philosophy on existence in bitter comedy that does not make you laugh, but rather ponder to the extent that you may end up feeling suffocated.

In his 2019 feature, “About Endlessness,” he presents fragments from the daily existential crises of many individuals who show up in short episodes of a few minutes, depicting daily problems in a society that does not want to lend an ear to each other’s issues. He refers to the accumulated political traumas back and forth scattered among episodes of personal stories. Every episode starts with the phrase “I saw a man who...,” which becomes an irritating announcement that alerts you to a new (very) short story. It starts and finishes before you settle in to understand and leaves you unfulfilled. You continuously find yourself in a struggle to get a better understanding of people who seem to be half dead. Occasionally, one character attempts to express their internal crises, and people around cannot bother to listen to them. The director slaps you in the face with the harsh reality of loneliness in a Scandinavian setting. It is hard to sympathize with it from a Turkish perspective, but it does give you an idea about the famous individualism and loneliness that part of the world is known for.

Apart from the emotional plainness, most of the episodes portray Scandinavian minimalism in the setting and casting. What you stare at are neat streets, restaurants and closed spaces decorated with minimalist objects, a theme reflected in the characters' behavior as well. Life seems to have a monotonous, emotionless and indifferent flow. It makes you want to interfere with the story and shake the characters back to life. Plus, the sky is always grey, dim and sultry. In this respect, the film delivers a stereotypical Scandinavian monotonicity that overwhelms you, despite the comparatively short 74-minute timeframe. You feel like you cannot take more as you leave the hall in am almost half-drunken state.

These traits all pertain to a type of Western boredom that you cannot encounter in Turkey. The director offers a critique of Western individualism by showing the ridiculous misery it inspires. He also occasionally touches on issues like religion and politics. In one episode, a priest goes through a crisis of faith, and he sees himself bearing a huge cross, dragging it on the streets, surrounded by people who torture him in his dreams. He seeks a cure in a psychiatrist's clinic, where he receives subpar care.

In another episode, you find yourself in Hitler’s underground headquarters, with two high-profile soldiers who do not even bother to hail him properly as they feel wasted. He shatters the mythological depictions of a strong, disciplined and scary organization by mocking it with black comedy.

All the successive episodes tell other unique unrelated stories that constitute a bonding storyline, all in constant grey tones. It is quite hard to concentrate on what is going on, which would make it hard to watch for average action audiences, as it is impossible to find a linear flow of action. Despite the sense of suffocation and boredom, you end up thinking about the scenes you have seen. This style has been Andersson's signature touch, but I should warn that the film is not an easy piece to swallow if you are not interested in pushing your mind and heart in a cinema.