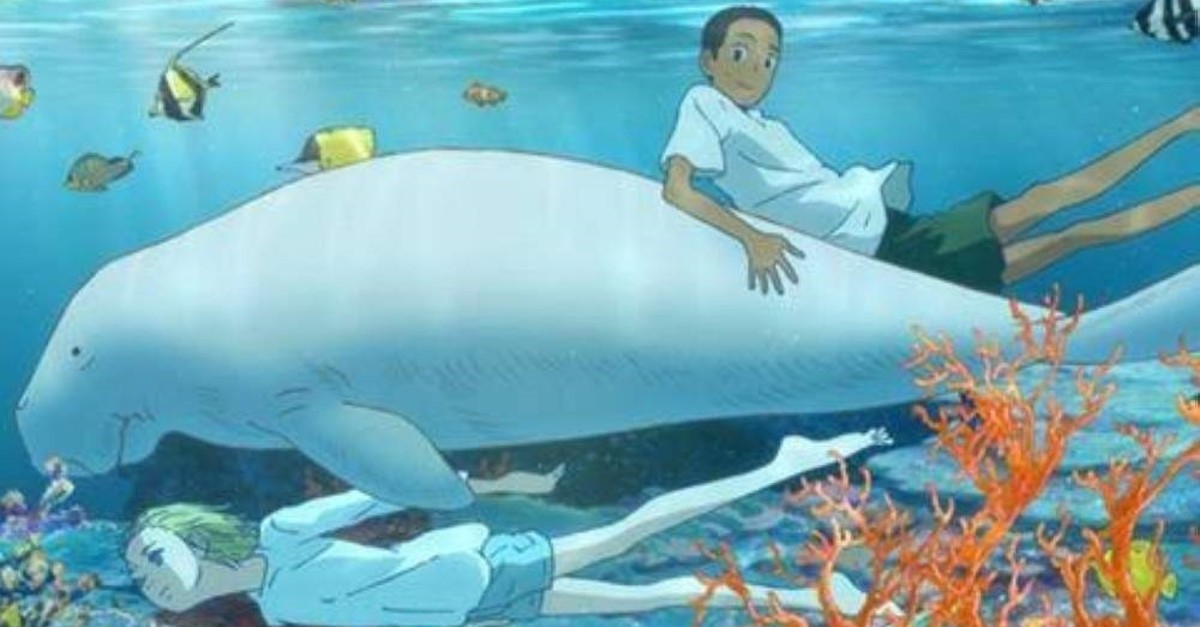 Adapted from an award-winning manga, Ayumu Watanabe's anime 'Children of the Sea' brings the magical world of the oceans to the big screen

Japanese anime enthusiasts must be some of the most environmentally conscious people out there. There does not seem to be a single film that comes out from those anime studios that does not address issues surrounding the natural environment, its needs, and the horrid ways in which humans treat it. Adapting a manga by Daisuke Igarashi, the director Ayumu Watanabe endears marine life to the viewer with his stunning visuals.

"Children of the Sea" takes as its focus the seas surrounding Japan and the multifariousness of life that lives in this blue habitat that we know so little about. The film’s environmentalism doesn’t work through showing us whales dying on our shores having swallowed the plastic we dumped in the ocean – there is something counter to the dignity of these animals in parading them so on social media, one has to say – but through introducing us to the intricate social life the oceans have, and reminding us how much is at stake should we continue to treat the seas as a dumping ground.

"Children of the Sea" is a production of the Japanese anime studio Studio 4°C and apparently 4 degrees Celsius is when water is at its densest. The studio is clearly very interested in water’s qualities and possibilities. Studio 4°C was founded in 1986 and has 33 years of experience under its belt, reminding us of the kind of expertise needed for such quality of work. One of the illustrators explained to the jurors at the Ajyal Film Festival that 50 illustrators worked on the project for five years.

Like in Miyazaki’s films, "Children of the Sea" has a female lead, Ruka, who is not well-liked in school and who develops a friendship with two "children of the sea" she meets through her connection with the local aquarium where her father works. This premise is reminiscent of Miyazaki’s "Ponyo," but the plot goes elsewhere. In fact, it gets diffused and becomes more of a scaffolding for the magical graphics that we will be exposed to toward the end of the film. The first "child of the sea" she gets to meet, Umi, helps Ruka understand the properties of water better. Umi and his brother Sora have been raised by a dugong – a sea mammal that is alien to me – and so, when connections between the oceans and space are made later in the film, it all makes sense. Whales themselves have been the subject of a very long fascination for humans; their sheer size is quite remarkable for puny humans living in the lesser, earthier section of this blue planet.

Having been raised in the ocean, both Umi and Sora need to be constantly "watered," wearing wet blankets and bathrobes, cutting strange figures when they do go into town. You can read many metaphors into this: about teenagers who don’t fit in and our dependence on water as a species. The two boys, but particular Sora, pass on "oceanic" knowledge to Ruka through a little black talisman-like stone, knowledge particularly on whales who are communicating for an important gathering to take place. In a story that tries to explain the creation of the world, the black stone could easily be a stand-in for the meteorite on which life is theorized by certain evolutionists to have come to planet Earth, or for part of the black stone of heaven which is believed to have been built into the structure of the Kabaa.

There also seem to be "darker" forces at work in this story of discovery: "authorities" who want to learn about the place and time of the sea creature gathering. It is not quite certain whether these people want to get the knowledge in order to further science, or to literally make a killing. It is interesting that this film has come out, after being in production for some time, after Japan started to allow whaling again after 32 years in 2018.

We swim through shoals of glittering fish with Ruka. The graphics make the small fish and the plankton look like stars being born and dying, and the minute you think that, the visuals morph into shooting stars more recognizably, and then back to fish again, until the idea is lodged in your mind that the oceans are an iteration of the universe we like gazing up toward in the night sky.

In that sense, the film is in many ways a creation story that privileges the seas, a concept that is not alien to the more traditional ones we are familiar with. There is a beautiful scene in which Ruka must necessarily be eaten up by the whale or ocean being and then secreted, like an egg, into what seems to be a reproduction track. The aesthetic of the universe being born is imagined here as within a female, that laborious act of the egg actually being secreted out. There are surreal scenes of whales themselves flying up toward the stars.

The film alerts us to every drop of water we encounter: tears, glasses, pools. The raindrops through which a speeding bicycle races morph into small fish and then back into raindrops. Things become transparent and sometimes disappear, and sometimes take another solid shape. Although the story on the surface is about a girl who finds it difficult to fit in and finds different friends, it also has aspects of a fairy tale where forms are not fixed and, while sitting in your seat, you feel you might at any moment break into your own atoms and reassemble as a shooting star.

"Children of the Sea" drives home the idea that the sea contains the seeds of the whole universe, and that, clearly, killing the seas would mean killing the possibilities of worlds that may sustain life in the future. Commentators remind us that humans have been pouring much more money and energy into exploring space while only 5% of the oceans have been explored. "Children of the Sea" can be seen as an effort to enchant the viewer once more with this vast world that is much closer to us than we imagine.