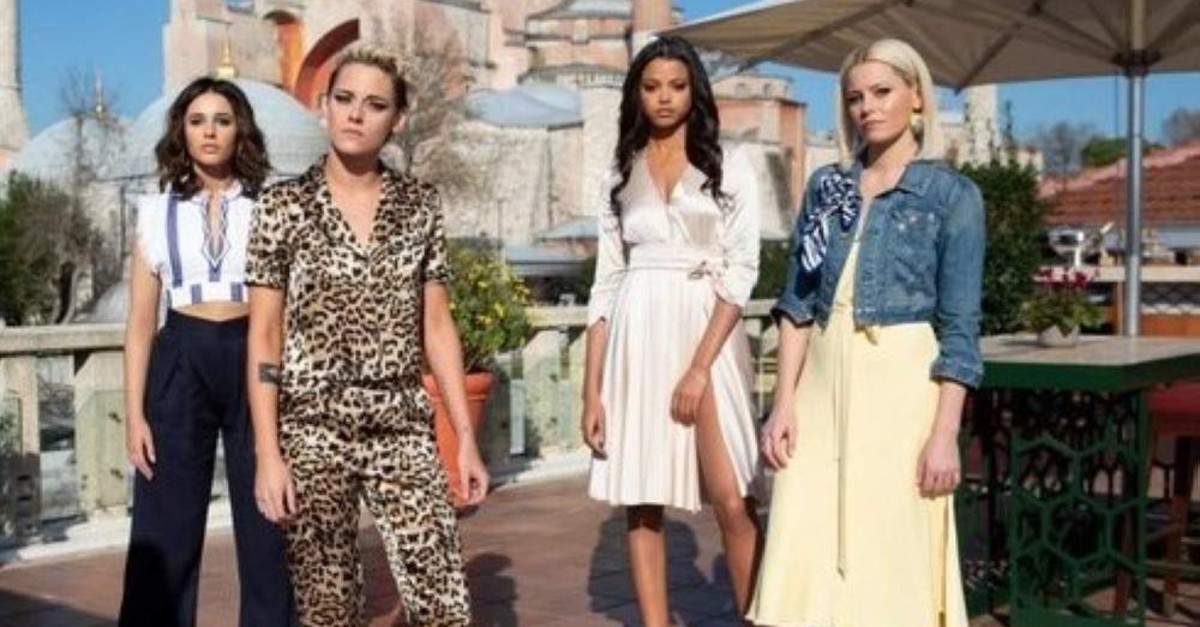 ,Charlie's Angels, features Naomi Scott, Kristen Stewart, Ella Balinska and Elizabeth Banks, respectively.
by İREM YAŞAR Dec 06, 2019 7:56 pm
The first film adaptation of the TV series “Charlie’s Angels” hit the big screen almost 20 years ago. The film followed as three highly-skilled special agents played by Cameron Diaz, Drew Barrymore and Lucy Liu carried out the bidding of their mysterious coordinator, Charlie, and it was a mainstream hit. However, as far as I know, the only thing about the original feature that has stood the test of time is its iconic outfits, with wigs, bikinis, fancy party clothes and even a nun costume getting thrown in the mix. However, the over-the-top fight scenes and wanting special effects have meant it was clearly in line for another reboot under the directorship of Elizabeth Banks this year.
Starring Kristen Stewart, Naomi Scott and Ella Balinska, like the original, the reboot mostly sticks to the quintessential formula of blending clothing and style with ferocious fight scenes. Although the outline is the same, the new movie casts a distinctively more modern, feminist light on the story. The angels have always represented an expert, all-female fighting force of beautiful women showing bravery in the face of danger, but in this installment, they excel. The weightiness of female power is overwhelming from the very beginning. In the opening scene, “I think women can do anything,” says Sabina, played by Stewart, to some evident rich-guy character. As the flow of events throws the team on a whirlwind adventure, it constantly points to that "girl power" is the driving force for this brisk feature.
In the story, a young engineer named Elena, played by Scott, appeals for help from the angels, as she thinks some technological device that her company has invented as an eco-friendly means of generating energy can be transformed into a world-ending device or weapon if placed in the wrong hands. The film follows as Elena, joined by the angels who she will later join, battles to ensure the device stays out of harm's way.
The harmony between the three leads deserves all of the credit it can get. Stewart’s character, particularly, has some funny moments, too. However, this chemistry is not enough to make the production enjoyable over the course of the run time. As the story is super-ordinary and undoubtedly cheesy, viewers go in naturally expecting more from the action scenes. Unfortunately, it would take a more experienced action movie director to carry this out with the professionalism needed to make this reboot beyond something more than just a cliché adaptation of the original. It looks as if the necessary effort to do this just hasn't been put in. To compare, the plot of “John Wick” is quite typical, but Keanu Reeves' fight scenes and their direction make it watchable throughout.
Interestingly, however, a key part of the movie takes place in Istanbul, the city that sits on two continents. It is truly an amazing choice for the movie and undoubtedly adds to its visual quality. Contrary to the failure of the action scenes, the stunning views of the metropolis arouse curiosity. Shots of historical places, such as the Grand Bazaar, and Hagia Sophia, and the boats sailing along the Bosporus are an instant allure.
Nonetheless, as so often happens in Western cinema, the movie is laden with Orientalist tropes in its representation of the city and its people. The agents wear headscarves as not to draw attention to themselves inside the Grand Bazaar. It would be nice, on some notes, to increase the West’s awareness of the fact that the headscarf is a matter of choice in this region. While some have a right to wear it in accordance with their Islamic beliefs, rather than as a sign of backwardness, others also have the right not to. The idea that it makes women indistinguishable from the crowd is equally problematic, and crucially, in this city, it is unfathomable that wearing the headscarf would automatically mean one avoids attracting attention.
All in all, “Charlie’s Angels” is a witless movie with bland action scenes. Even if it believes girl power is enough to carry it off, it is a form of girl power that repeats the trope that heroines who are young, powerful and diligent can achieve whatever they want. I recommend only watching to relieve some stress and enjoy some of Istanbul's breathtaking scenery.