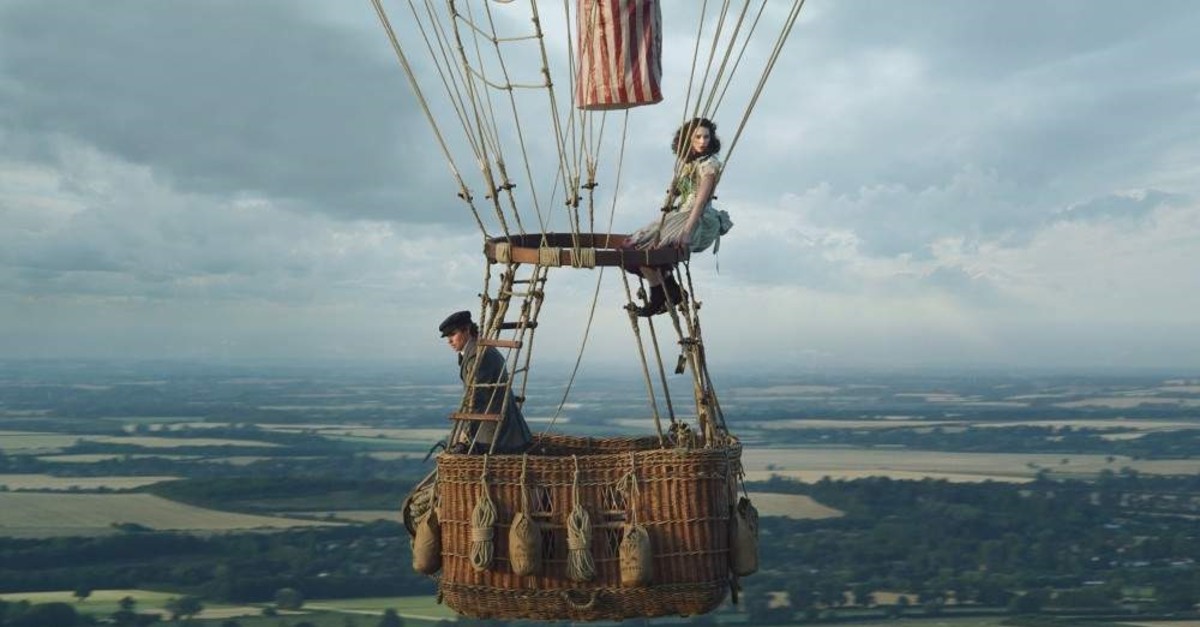 This image shows Eddie Redmayne (left) and Felicity Jones in ,The Aeronauts., ( AP Photo)
by Anadolu Agency Dec 09, 2019 2:59 pm
A total of seven features have been released in Turkey this week
‘The Aeronauts’
“The Aeronauts” is directed by British filmmaker Tom Harper and stars Oscar-laureate Eddie Redmayne and Felicity Jone, featuring alongside Himesh Patel, Anne Reid and Phoebe Fox. The film follows the death-defying balloon ride embarked on by fearless hot-air balloon pilot Amelia Wren and her pioneering meteorologist partner James Glaisher in an attempt to greater understand the nature of weather and climate. Set in 1862, Wren and her scientist friend attempt to climb to an altitude never-before reached, eventually forced on a fight to survive once they reach their stratospheric goal.
‘Dylda’
Directed by Kantemir Balagov, “Beanpole” (Russian: “Dylda”) stars Konstantin Balakirev, Andrey Bykov and Olga Dragunova and has picked up accolades at a number of festivals, culminating in its being nominated for a Nika award (the "Russian Oscars") in 2020. The film follows the story of two young women struggling to eke out a normal existence in Leningrad in the aftermath of World War II. Co-written by Kantemir Balagov and Aleksandr Terekhov, the film focuses on the lives of Iya and Masha who are in search of meaning and hope to survive.
‘Portrait de la Jeune Fille en Feu’
French filmmaker Celine Sciamma’s "Portrait of a Lady on Fire" (French: “Portrait de la Jeune Fille en Feu”) has been critically acclaimed as one of 2019's best features. The film is set in 19th century Brittany, where a deepening connection is emerging between Heloise, who is being begrudgingly pressured into an arranged marriage, and Marianne, the artist charged with surreptitiously painting her wedding portrait. Written by Celine Sciamma, the drama film stars Noemie Merlant, Adele Haenel, Luana Bajrami and Valeria Golino.
‘The Addams Family’
The Addams family return in animated form. Co-directed by Conrad Vernon and Greg Tiernan, the grim but ever-loving family was the original creation of cartoonist Charles Addams and has been brought to life in film and television at various times ever since.
'Mucize 2: Aşk'
“The Miracle 2: Love” (Turkish: “Mucize 2: Aşk”) is the much-anticipated sequel to the 2015 original, written and directed by Mahsun Kırmızıgül. The film, starring the director himself, also includes Mert Turak, Fikret Kuşkan, Biran Damla Yılmaz, Erdal Özyağcılar, Şenay Gürler, Sinan Çalışkanoğlu, Melis Sezen, Levent Sülün, Deniz Oral, Sera Tokdemir and Ali Sürmeli. The drama depicts the life of Mızgin, who is forced into an arranged marriage with Aziz, a disabled young man living in a mountain village in the east. The film's cinematography comes courtesy of Soykut Turan, backed by an impressive soundtrack composed by Tevfik Akbaşlı, Yıldıray Gürgen and Mahsun Kırmızıgül.
‘Curse of the Nun’
Directed by Aaron Mirtes, “Curse of the Nun” stars Lacy Hartselle and Kate Kilcoyne. The horror feature shows a damaged young woman looking forward to moving to a beautiful new home. However, the spirit of a deranged nun has no plans on moving.
‘Go Fish’
Directed by Sean Patrick O'Reilly, this week's animated film "Go fish" follows parrotfish Alex and his friends as they embark on a mission to protect their ocean waters from the effects of pollution.
Last Update: Dec 20, 2019 2:15 am
RELATED TOPICS