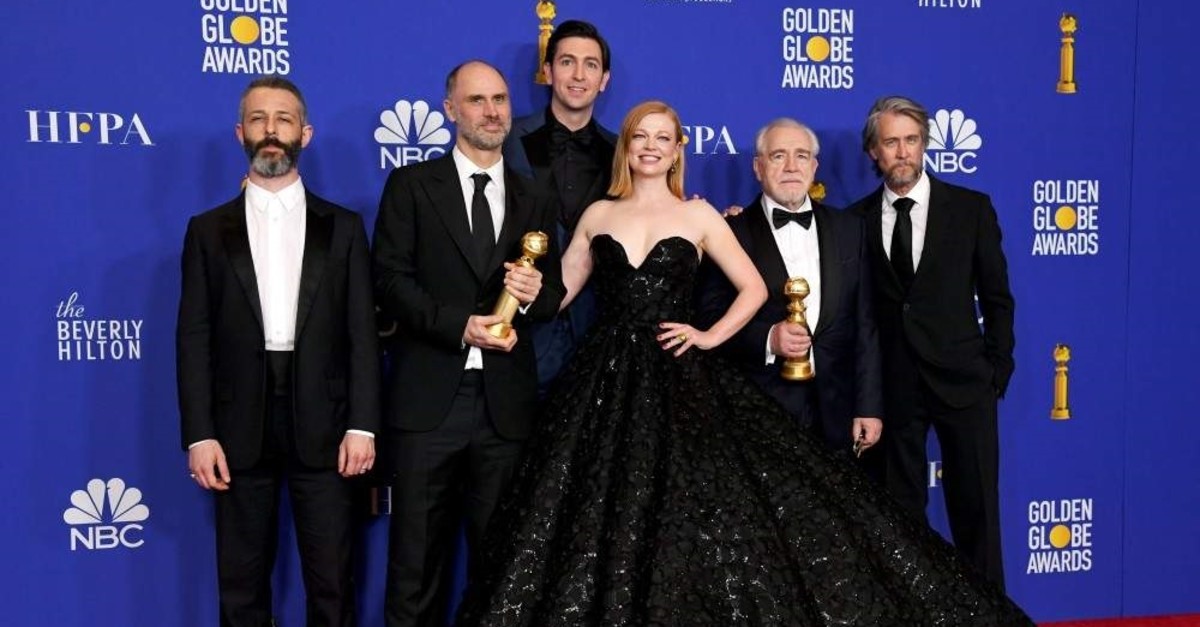 Real-world issues also found their way into Sunday's ceremony. In accepting the best actress award for the miniseries "Fosse/Verdon," Williams made abortion and women's rights the central theme of her remarks.

The actress said her carer would not have been possible without "employing a women's right to choose. To choose when to have my children and with whom," adding, "When it's time to vote, please do so in your own self-interest. It's what men have been doing for years."

For Colman, it's good to be queen. She won a Golden Globe for her performance as British monarch Elizabeth II in "The Crown" after claiming a 2019 Oscar for playing an 18th-century English ruler, Anne, in "The Favourite."

"I said I had money on this not happening. For the last year, I feel like I've been living someone else's life. Now I feel like I definitely won someone else's award," said Colman, who succeeded Claire Foy as Queen Elizabeth in the latest season of the series.

"Chernobyl," which dramatized the devastating nuclear accident in the then-Soviet republic of Ukraine, was honored as best limited series, with cast member Stellan Skarsgard named best actor in a supporting role in a series, limited series or TV movie.

Patricia Arquette won best TV supporting honors for "The Act," based on a true crime.

She credited her co-star, Andrew Scott aka the show's "Hot Priest," for their much-lauded chemistry.

Former President Barack Obama also got a shout out from Waller-Bridge for putting "Fleabag" on his 2019 best-of list. "As some of you may know, he's always been on mine," she said, playfully, referring curious viewers to season one of her series.

Despite the high praise, Scott didn't convert his nomination into a supporting actor trophy. But he had starry company in the also-ran category, with Aniston and Reese Witherspoon failing to take home awards for newcomer Apple TV Plus' "The Morning Show," Meryl Streep and Nicole Kidman losing for "Big Little Lies," and Emmy-winning Billy Porter of "Pose" also overlooked.

World War I epic "1917," released by Comcast's Universal Pictures, was the surprise winner of the best motion picture at the star-studded ceremony, which kicks off Hollywood's competitive awards season. Sunday's other top award – Best Musical or Comedy – went to Sony Pictures' "Once Upon a Time in Hollywood." The Quentin Tarantino 1960s comedy-drama stormed various categories, earning a total of three awards.

The broadcast networks, including Globes network host NBC, didn't have a chance: All of them were shut out of the nominations in an unprecedented sign of the small screen's shift to cable and streaming in attention and prestige.

The growing number of streaming platforms, including Apple and Disney Plus, is a dominant media story. But while streamers performed well at the Globes with Netflix's "The Crown" and Amazon's "Fleabag" they didn't shut out cable contenders including FX's "Fosse/Verson" and HBO's "Succession."

At the start of the Globes ceremony, host Ricky Gervais predicted a big night for Netflix. "Everyone's watching Netflix," Gervais said. "This show should just be me coming out going 'Well done, Netflix. You win.' But no, we have to go on for three hours." But in addition to the film honor, Netflix landed only one other trophy.

Joaquin Phoenix was named Best Actor for his role in "Joker," while Renee Zellweger won Best Actress for her work depicting Judy Garland in "Judy." Meanwhile, Awkwafina on Sunday night became the first Asian-American woman to win a Golden Globe Award for Best Actress in the Musical or Comedy category for her role in "The Farewell." In the same category, Actor Taron Egerton won the award for his role in "Rocketman."

The Best Motion Picture in the animation category was "Missing Link," while the best foreign language motion picture was "Parasite."

Russell Crowe used his win at the Golden Globes to send a powerful message about the devastating fires in Australia and climate change -- despite not being in the room.

Crowe stayed in his home country "protecting his family from the devastating bushfires," presenter Jennifer Aniston explained, before reading his message.

"Make no mistake, the tragedy unfolding in Australia is climate change-based," wrote the actor, who won for Showtime's "The Loudest Voice" about Fox News founder Roger Ailes, calling "for respect for our planet for the amazing place it is. That way, we all have a future."

"We need to act based on science, move our global workforce to renewable energy and respect our planet... That way, we all have a future."

Egyptian-American actor Ramy Youssef doubtlessly raised a few eyebrows as he took to the stage after winning the first Golden Globe of the night for best actor in a comedy series for "Ramy."

"I would like to thank my God. Allahu akbar. Thank you, God," the Muslim actor said.

"I know you guys haven't seen my show," he self-deprecatingly told the celebrity-packed ballroom, adding, "This means a lot to be recognized on this level."

"Succession," about a media empire beset by family infighting, won the best drama series award. Brian Cox, who stars as the patriarch, was honored as best actor.

"I want to apologize to my fellow nominees for winning this. I'm sorry.... I never thought this would ever happen to me," the veteran actor said.

'Go out and vote'

Michelle Williams urged women to go out and vote in this year's US presidential election as she accepted a Golden Globe for best actress in a limited series or television movie.

"As women and as girls, things can happen to our bodies that are not our choice," the "Fosse/Verdon" star told the audience.

"So women, 18 to 118, when it is time to vote, please do so in your own self-interest... It is what men have been doing for years, which is why the world looks so much like them," she added.

"Don't forget we are the largest voting body in this country. Let's make it look more like us."

'On the brink of war'

Arquette also used her moment in the spotlight to decry heightened tensions between the United States and Iran, after the U.S. strike that killed a top Iranian military commander.

When future generations "look back on this night in the history books, we will see a country on the brink of war," Arquette said, accepting her award for "The Act."

"The United States of America, a president tweeting out a threat of 52 bombs including cultural sites... People not knowing if bombs are going to drop on their kids' heads -- and the continent of Australia on fire."

She also ended her speech appealing to viewers to vote in the upcoming November election.