To project within: The films of Rosa Barba 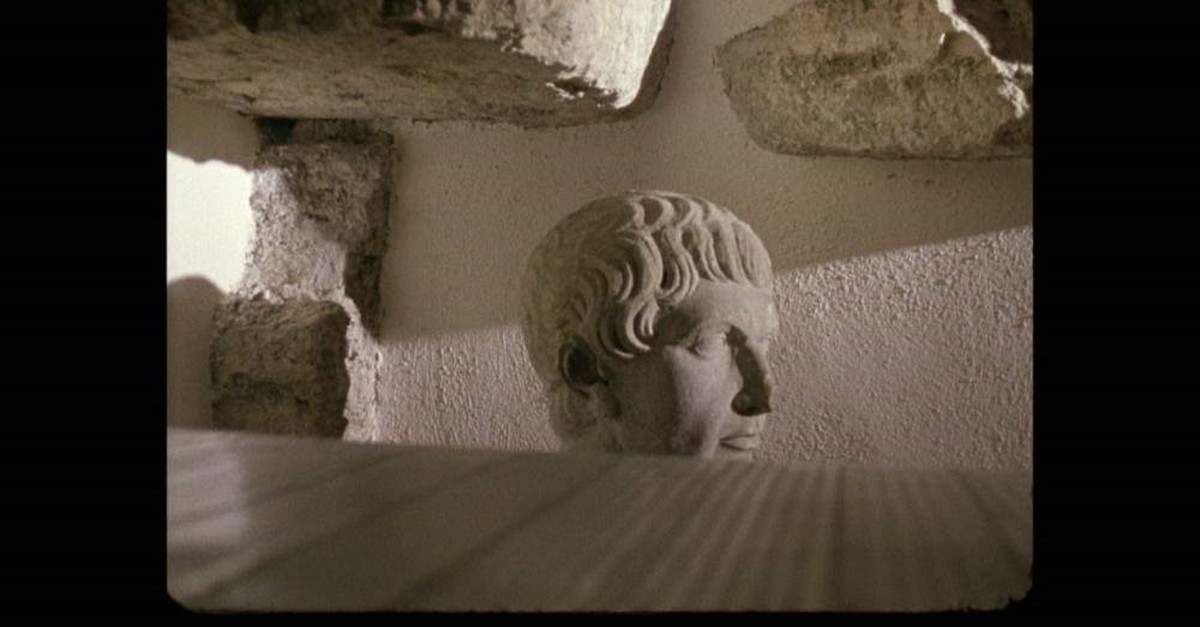 At Gallery 1 in the new Arter museum, a triad of films by Rosa Barba unveils the backstory of the exhibition and collection of art. With its subdued cinematography, her work is an invitation to a shadow world of curiosities

There are faces that flicker in the celluloid light, each a testament of the past and its imagining by the hands of artists. Their names are unrevealed.

A word cloud hangs over a breezy room, all the more ambient for the sound of three projectors whirring in the silent, lofty museum space. A group ambles past, followed by a lone seeker who stands behind a screen, eyeing for a fresh perspective. And that is what filmmaker Rosa Barba delivers, casting a hard light on the world of art behind closed doors.

By appearances, Barba trains her lens on works from the ancient times to the modern, or what the New Yorker's senior art critic Peter Schjeldahl would call entirely contemporary, noting that all created art is concurrent, and temporary, along with its appreciations, definitions and time simply because it exists now. She makes a point to trace her camera sidelong, oblique and edgewise, framing the contours of the shelves, utilities and architecture of the facilities in which the art is stored as much as to show the works themselves.

"Poured Painting: Blue, Black, Blue" (1999) is somewhere in the middle of "The Hidden Conference," the title of the film trio, also placed above the word cloud in which the names of artworks are connected to each other, seemingly haphazardly. "The Orientalist" (1976/77) points to "Landscape with Forest" (1925), which then returns to "Poured Painting." Barba could be said to be an archivist, beginning with her work as a curator for the Museo Reina Sofia in Madrid for her 2010 show, "A Curated Conference."

Stylized in the vein of an homage to the silent film era, a black-and-white text appears onscreen for her piece, "The Hidden Conference: About the Discontinuous History of Things We See and Don't See" (2010). It reads: "As he moves easily between various groups, he recognizes both relationships and negation between participants." With a mystic aura, her film has a fantasy element, in which the artworks are shown to have private lives, assuming an invisible existence, personality and experience onto themselves.

The eye and its double

Barba, as an artist of film, curates like a director. She places human figures in scenes that, while lacking action, are potent with drama. A pair of robed Greco-Roman men converse whisperingly, obscured by a rectangular object, just enough to allow them the distance to mumble on about what matters might concern them for the rest of eternity. A gleaming light bounces off the busts of men, statues of bulls and figurines of prehistoric models.

"Between times and possibilities, a state of readiness for departure," reads a text midway into "About the Discontinuous History of Things We See and Don't See." The words set up a transition from her focus on the sculpture to that of the painting. While also focalizing on other anthropomorphic pieces in wood and stone, she begins to explore a more two-dimensional world, in which paintings are hung, and slid on layers of caging.

It is an austere, unglamorous life for art when not displayed in public, or sold to a fawning collector. Barba does credit the works, by title and date, in "About the Discontinuous History of Things We See and Don't See." The works span the better part of the 20th century, from "Portrait André Gide" (1928) to "Sea-piece" (1970). But for her lengthiest, 14-minute work at Hidden Conference, a piece subtitled, "About the Shelf and Mantel" (2015), she dives deeper into obscurity.

A stripe of tether wrapped around stored paintings adds a touch of contemporaneity to otherwise antiquated fashions of human portrayal and scenographic coloration. And a sculpture, bagged and boxed, takes on the guise not only of its internalized form but of its non-curated context, lending insight into the fundamental requirements of what could be called intellectual decoration, if not curation, for lack of higher-brow sentiment. Yet, Barba discovers the coincidences of filmic opportunity, when, for example, overlapping paintings in reflection.

There is a school of thought which says a thing or process can only be understood or named by identifying its opposite, so as to situate its distinction with proper perspective enough to grant unique definition. By fixing her camera on certain canvases in "About the Shelf and Mantel," one of which is by the early modern Turkish painter, Fahrelnissa Zeid, the light in the room changes and bounces off of the metallic industrial equipment in the cold backrooms.

With repetitive cycles of frames that slowly move and transparently overlay beautifully painted pictures with monotonous industrial geometries, Barba's film enchants into a seamless experience of art and its opposite as also aesthetically codependent. These works, without their placards of description, admiring crowds and high-ceilinged environs, are to a great extent denuded of the prestige won by the traditions of their popular celebration.

At a point in the film, "About the Shelf and Mantel" (2015), a work of oils is suffused with a reflection of the decidedly uncultured setting on which it depends for longevity, or as an artist might aspire toward, immortality. Just how much the artist ego needs all of which might be termed and categorized as not-art escapes not only artists but also public romantics, amateurs, even the historical aficionados and fair socialites among them.

In the shortest film, "A Fractured Play" (2012), clocking in at five minutes, the artworks themselves come to resemble the fragmented interior of disassembly, of apparent chaos prior to the anticipation and curation of a show on the open floor. But by filming these objects on their own, as it were, broken in more ways than one, from their original, ancient installations, and also from a proper angle for viewing, Barba humanizes these pieces of stone.

The deified men and women of antiquity, worker spirits and robed belles take on an air of natural life, unmediated by the fleeting subterfuge of overeducated, postmodern society. It is an advantage of film to peer into the depths of collective consciousness and to spy assemblages of things otherwise prepared for the pretenses of live encounters. Barba is an acute observer of the art world as part of a holistic relationship with all of the human industry.