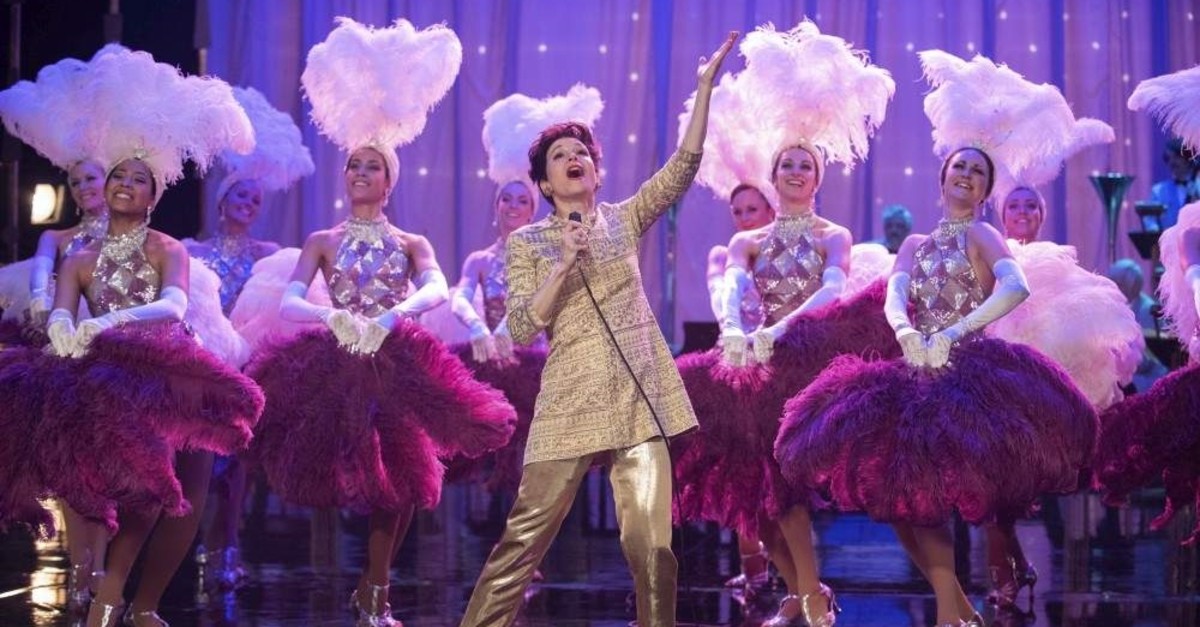 This image released by Roadside Attractions shows Rene?e-Zellweger as Judy Garland in a scene from ,Judy., (AP Photo)
by İREM YAŞAR Jan 10, 2020 5:55 pm

"I have to leave my children if I want to make enough money to be with my children?" says Judy Garland, played by Renee Zellweger, to her friend Ken Frisch with a look of desperation. We meet a Garland in her 40s, broke and only wanting to ensure she has a comfortable house for her two younger children, Lorna and Joey. It is impossible not to feel sorry for her.

"Judy," directed by Rupert Goold, carries the last stages of American actress, singer and dancer Garland's life and career to the big screen. The biopic opens with a scene from the set of "The Wizard of Oz," which is instantly recognizable from the iconic yellow brick road. A younger Garland talks to Louis B. Mayer, head of MGM studios, about life during the shoot. While Garland expresses her desire to live life like any ordinary teenage girl, Mayer simply reminds her of her responsibilities toward the movie that would volt her to fame.

This and many other flashbacks from the beginning of Judy's career make it easier for viewers to understand how such a talent could slowly become simply a showbusiness product and property of the Hollywood industry. Although just 13, Judy is constantly prescribed amphetamines to prop her awake over the long course of filming and given barbiturates to help her sleep. This is how Garland's addiction to drugs began. Moreover, she diets constantly despite her healthy figure and a normal growth in appetite that must be assumed in one her age. The studio wants her to be thin as a stick to market her as the quintessential teen star. Even a single hamburger becomes a big deal.

The fact that the studio and film industry stole her youth casts a shadow over the rest of her life as she matures into a rather morose addict with bouts of depression. Furthermore, she is underweight, the drugs and alcohol having taken their toll on her physical and mental health. Although her voice is still capable of enchanting scores of fans – especially made up of gay men during her theater years – it has clearly withered from neglect.

Despite everything, she must go to London to perform a series of concerts due to her financial issues, despite not wishing to take the stage at all, as she feels truly burned out. All she wants is to be with her children, but everything comes at a price. She plans to earn enough money to buy a house to quit the business and spend all her time with them. When you witness how panicked she is backstage before going out into the limelight, her devotion to her children is palpable. Surely, she is working hard to overcome her past traumas in order to offer them a better life.

What is impressive about Garland is that she shone on the stage and offered audiences a delivery that seemed to allow all the issues regarding her mental situation, health, desperation and disappointments to seep into the background. In reality, she had a life full of success, appearing in more than two dozens films and showcasing a string of record-breaking concerts. Indeed, her story is the story of Hollywood itself. She is not the only one who has been destroyed by this industry.

These types of dramatic biographies have always been a favorite of the cinema world, quickly going down as classics. Remember "Bohemian Rhapsody" and "Rocketman"? Both movies become major box office hits. But Zellweger makes this feature a veritable masterpiece in her portrayal of Garland. She enraptures the audience while reflecting on Garland's struggles. The timely transitions between the past and present throughout the story do nothing but bolster Zellweger's performance. Indeed, the flashbacks provide the necessary information on how early stardom affected Garland's later mental and physical state in a way showcased masterfully by Zellweger. It is no surprise that she received the Golden Globe Award for Best Actress in a Motion Picture last Sunday.

The end of the movie shows another success. While all pity, tragedy and drama accumulate with sad events coming one after another, Judy performs one last time on the London stage, having been booed by listeners in the previous show. Excitement is in the air as she sparkles one last time, offering the audience a moment of catharsis. We then learn that Garland died six months after her London concert series at the age of 47. Get ready to leave the theater with a broken heart with this story of faded dreams.