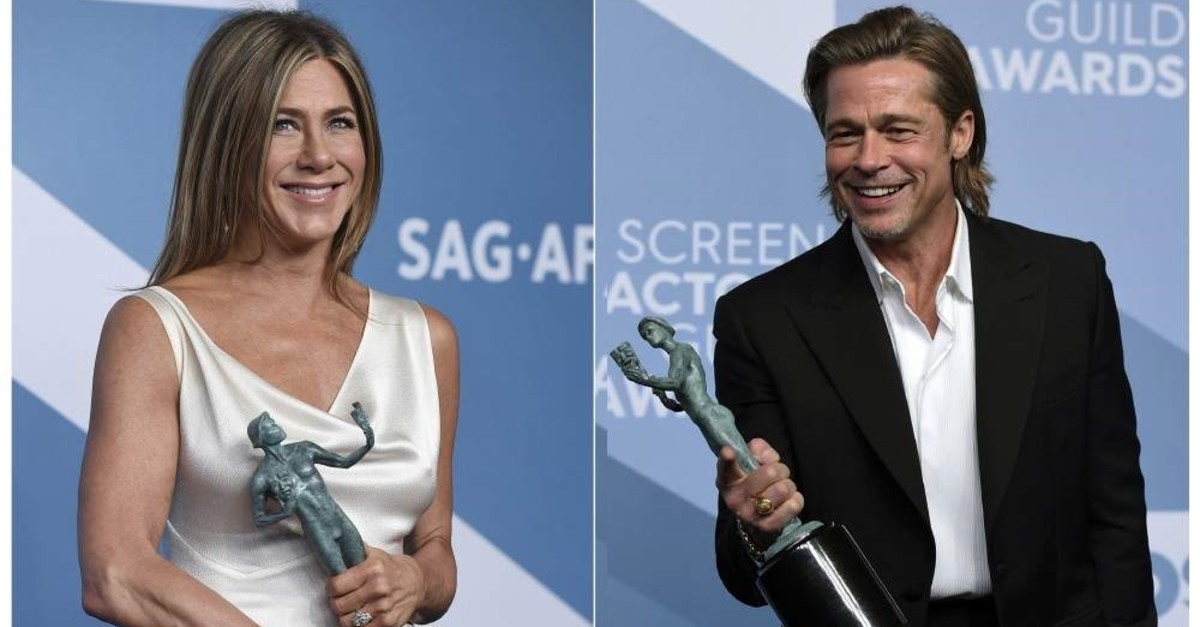 Pitt is headed toward his first acting Academy Award for his supporting performance in "Once Upon a Time ... in Hollywood," and he added to his front-runner status with a win from the actors' guild. Along the way, his speeches have been full of one-liners, and he didn't disappoint Sunday at the Shrine Auditorium in Los Angeles.

Pitt, who said he was nursing the flu, looked down at his award and said, "I've got to add this to my Tinder profile."

"Let's be honest, it was a difficult part. A guy who gets high, takes his shirt off and doesn't get on with his wife," joked Pitt. "It was a big stretch." The audience laughed and clapped, including – as the cameras captured – Aniston, his ex-wife.

Aniston later won an award of her own for best female actor in a drama series for the Apple TV Plus show "The Morning Show." "What!" she said upon reaching the stage. Aniston finished her speech with a shout-out to her "Murder Mystery" co-star Adam Sandler, whose performance in "Uncut Gems" has gone mostly unrewarded this season despite considerable acclaim.

"Your performance is extraordinary and your magic is real. I love you, buddy," said Aniston.

Laura Dern also further established herself as the best supporting actress favorite for her performance in "Marriage Story" with a win from the Screen Actors Guild. On her way to the stage, she hugged her father, Bruce Dern.

Phoebe Waller-Bridge continued her awards sweep for "Fleabag," a winner at the Emmys and the Golden Globes. Waller-Bridge added a SAG win for best female actor in a comedy series and took a moment to reflect on the show's parade of accolades.

"This whole thing really has been a dream, and if I wake up tomorrow and discover it was just that, then thank you," said Waller-Bridge. "It's been the most beautiful dream."

"The Marvelous Mrs. Maisel" also continued its streak, winning best comedy series ensemble for the second straight year, along with Tony Shalhoub taking home the statue for best male actor in a comedy series. But accepting the ensemble award, the show's shocked Alex Borstein said she had voted for "Fleabag."

"Honestly this makes no sense," said Borstein. "'Fleabag' is brilliant.'"

Among the films vying for the screen actors' top honor, best ensemble, are Oscar heavyweights "Once Upon a Time ... in Hollywood" and "The Irishman." They are competing with "Parasite" (only the second foreign language nominee after "Life Is Beautiful," which received a nod in 1999), "Jojo Rabbit" and "Bombshell."

Because actors make up the largest percentage of the Academy of Motion Picture Arts and Sciences, their picks are closely watched. But the last two years, the SAG ensemble winner has not gone on to win best picture: "Black Panther" last year and "Three Billboards Outside Ebbing, Missouri" in 2018.

Two of this year's top best-picture contenders at the Oscars – "Joker," more of a one-man show; and "1917," more acclaimed for its technical acumen – weren't nominated for best ensemble. On Saturday, "1917" won top honors at the highly predictive Producers Guild Awards, solidifying its front-runner status. In 21 of the last 30 years, the PGA winner has lined up with the eventual best picture winner.

Robert De Niro was given the guild's lifetime achievement award, an honor presented by Leonardo DiCaprio who, like De Niro, is a frequent leading man for Martin Scorsese. The two co-star in Scorsese's upcoming "Killers of the Flower Moon." A raucous standing ovation greeted the 76-year-old actor.

De Niro, a fiery critic of Donald Trump, referenced the president in his remarks.

"There's right and there's wrong. And there's common sense and there's abuse of power. As a citizen, I have as much right as anybody – an actor, an athlete, anybody else – to voice my opinion," said De Niro. "And if I have a bigger voice because of my situation, I'm going to use it whenever I see a blatant abuse of power."

Awards for stunt ensemble were announced ahead of the ceremony, with prizes going to Marvel's "Avengers: Endgame" and HBO's "Game of Thrones."