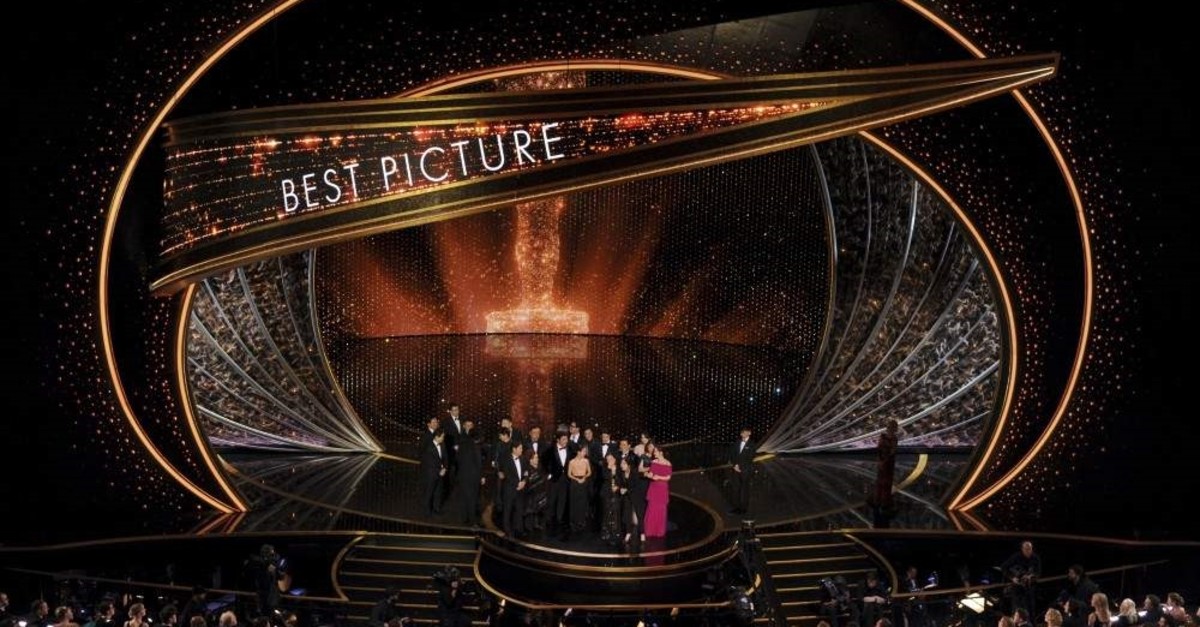 Called up to the stage again and again, Bong Joon Ho kept saying he was ready for a drink – "bloody ready." But the Oscars weren't bloody ready to stop giving him awards. By the end, the South Korean director and his masterful social thriller "Parasite" had won best original screenplay, best international film, best director and best picture, the latter a history-shattering win as the first non-English language film to win the top prize in the Oscars' 92-year history.

Bong's giddy, increasingly incredulous acceptance speeches were emblematic of an Oscar night that turned out to be much more inclusive and joyous than expected.

Indeed, when nominations were announced less than a month ago, the story was the depressing lack of diversity in the acting nominees and the fact that no female directors were nominated. That obviously didn't change, but the show itself struck an inclusive note from the start, with a bold and rousing performance by Janelle Monae. The night also saw the first Maori win an Oscar, a rare win by a woman in the best score category, and the first actor with Down syndrome to present at the Oscars.

Some key moments of Oscars 2020, both serious and whimsical:

As the very first person to take the stage, Monae set the tone when she plainly addressed the diversity issue in her opening number. "It's time to come alive because the Oscars is so white, it's time to come alive!" she sang. Her performance directly referenced movies and actors who'd been snubbed in the nominations and also the missing female directors. "I'm so proud to stand here as a black, queer artist telling stories," Monae said. "Happy black history month."

This we know to be true: If Hollywood is high school, the Oscars is prom night. And Brad Pitt has always been the prom king, missing only his actual crown. The much-admired actor, finally winning his first acting Oscar for his sly, knowing performance in Quentin Tarantino's "Once upon a time ... in Hollywood," grew emotional as he looked back at his fairy-tale rise to Hollywood stardom, beginning with a combustive sexy performance in "Thelma & Louise" nearly three decades ago. "Once upon a time in Hollywood. Ain't that the truth!" he said, misty-eyed.

All of the acting winners apart from Pitt – Renee Zellweger, Joaquin Phoenix and Laura Dern – went as expected. Zellweger completed a comeback, winning her second Academy Award for her fragile but indomitable Judy Garland in "Judy." Dern won for her performance as a divorce attorney in Noah Baumbach's "Marriage Story." Accepting her first Oscar, Dern thanked her in-attendance parents, "my legends, Diane Ladd and Bruce Dern." 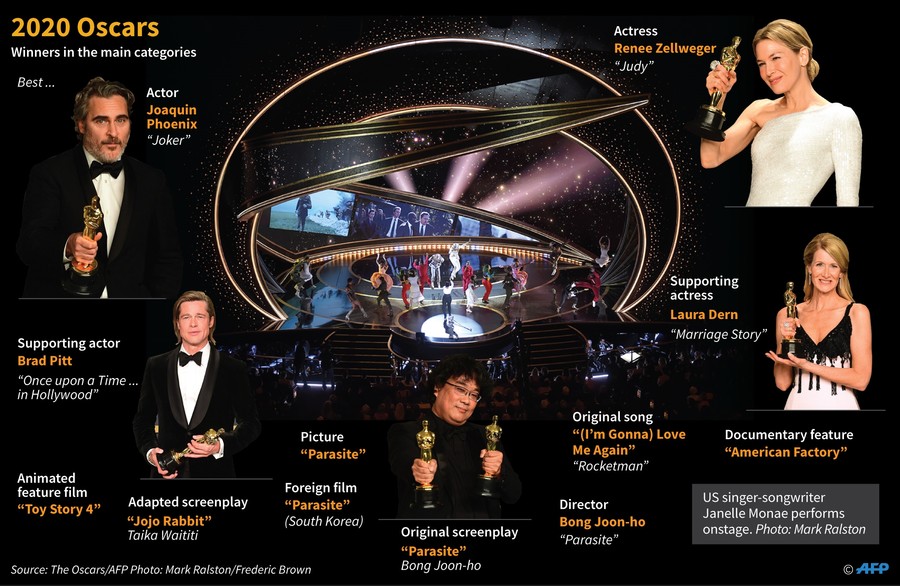 When Joaquin Phoenix won as expected, the "Joker" star spoke about "the opportunity to use our voice for the voiceless." He added that he saw a commonality in the different causes people in the Hollywood community fight for.

"Whether we're talking about gender inequality or racism or queer rights or indigenous rights or animal rights, we're talking about the fight against the belief that one nation, one race, one gender or one species has the right to dominate, control and use and exploit another with impunity," he said. He also apologized for past behavior. "I've been a scoundrel in my life," he said. "I've been selfish, I've been cruel at times, hard to work with. I'm grateful that so many of you in this room have given me a second chance."

Also getting a second chance was rapper Eminem, who stunned the crowd by showing up for a surprise performance of "Lose Yourself" – 17 years after it won the best original song from the movie "8 Mile."

An emotional highlight of the night was Taika Waititi's win for best-adapted screenplay for the anti-hate themed "Jojo Rabbit." Waititi, from New Zealand, became the first Oscar winner of Maori descent. He dedicated his victory "to all the indigenous kids of the world who want to do art and dance and write stories. We are the original storytellers, and we can make it here as well."

When "The Peanut Butter Falcon" star Zack Gottsagen appeared to present in the live-action short category, it was a first for both him and for the Oscars. Gottsagen was the first presenter with Down syndrome, and he received a standing ovation after intoning the familiar line: "And the Oscar goes to ..."

Mendes' audaciously conceived World War I film "1917," made to seem one continuous shot, had been the clear favorite heading into Oscars, having won nearly all the precursor awards, including top honors from the Producers Guild, the Directors Guild, the Golden Globes and the BAFTAs. In the end, "1917" went home with three awards for its technical virtuosity: Roger Deakins' cinematography, visual effects and sound mixing.

Awards were spread around to all of the best-picture nominees, with the lone exception being Scorsese's 10-time nominee "The Irishman." When Bong mentioned his admiration of Scorsese, an impromptu tribute broke out, with the Dolby Theatre giving Scorsese a standing ovation.

The car racing throwback "Ford v Ferrari" was also honored for its craft, winning both editing and sound editing. Gerwig's Louisa May Alcott adaptation "Little Women" won for Jacqueline Durran's costume design. "Once Upon a Time ... in Hollywood" for Barbara Ling's production design.

Rarely has the best original score category become a vehicle for a presentation on women's empowerment, but that's what happened Sunday night as Sigourney Weaver, Brie Larson and Gal Gadot – female action stars, past and present – took the stage.

After joking that they were forming a new fight club – "Men are all invited, but no shirts allowed," Gadot said – they announced that for the first time, a female conductor (Eimear Noone) would lead the orchestra in performing nominated film scores. Then Hildur Guðnadóttir won the award, for "Joker," only one of three solo women to ever win the best score. "To the girls, to the women, to the mothers, to the daughters, who hear the music bubbling within, please, speak up," she said. "We need to hear your voices," she said.