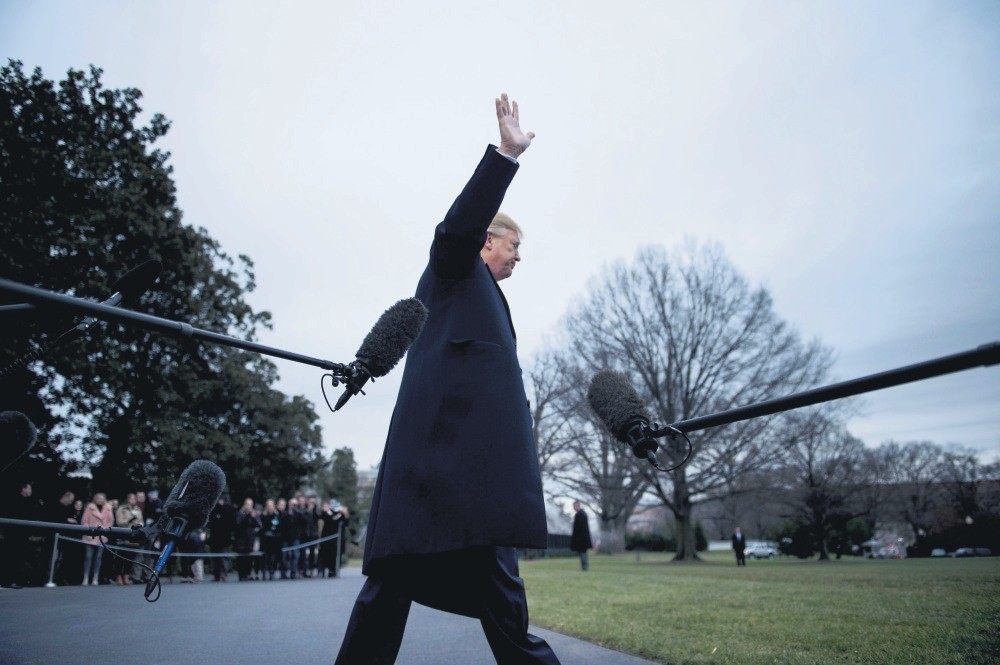 Due to its unilateral and irresponsible foreign policy and conflicting political discourse, Trump's America instigated the rise of anti-Americanism even in friendly countries

Donald Trump, who had no experience in politics, became the president of the United States with his famous motto "America first."

While Trump and his aides try to "make America great again," unconsciously, they have sped up the decline of American hegemony due to their unilateral foreign policy understanding and exclusionary political discourse.

Trump's America has begun to alienate almost all its partners, from the narrowest circle to the widest one, from Anglo-Saxon friends to European partners, from Latin American neighbors to Asian rivals, from Sub-Sahara to North Africa.

Trump's America contradicts its closest ally, the United Kingdom. The latest two cases, in which the Trump administration contradicted the May government, are Trump's proclamation on Jerusalem and retweeting inflammatory videos shared by a British ultra-nationalist politician.

Similar to almost all European countries, the U.K. government also rejected Trump's decision on Jerusalem. In her official statement, British Prime Minister Theresa May pointed out that her government disagrees with Trump's decision.

Similarly, all sides of the House of Commons condemned the decision. Moreover, Prime Minister May denounced President Trump for sharing abusive and threatening videos posted by Jayda Fransen, the deputy leader of Britain First, a far-right political party in the U.K.

Trump, who is against the global free trade order established by Pax Americana, declared the end of the era of multinational trade agreements.

As soon as he came to power, Trump withdrew the U.S. from the Trans-Pacific Partnership (TTP). As a result, the 11 Pacific Rim countries, which had total trade of $350 billion last year, decided to resurrect the partnership and start free trade.

Trump's America initiated a comprehensive trade war with European countries. Trump promised to scrap the Transatlantic Trade and Investment Partnership (TTIP). Nevertheless, he claimed that it would limit imports of steel and aluminum to protect domestic companies.

The European Union will retaliate against any sanctions imposed by the U.S. against European companies. EU Commission President Jean-Claude Juncker had to declare that the EU's mood "is increasingly combative" on the topic of international trade.

Latin American countries, which are considered as the "near abroad" of the U.S. since the early years of the 19th century, consistently complain about threats from the U.S. Similarly, most Asian countries have many political and economic divergences with Trump's America. Trump even attempted to renegotiate the North American Free Trade Agreement (NAFTA).

In particular, after the Jerusalem decision, it would not be surprising if anti-Americanism skyrockets in Muslim countries. Although it will satisfy the Israeli government and his constituency, the unpopularity of Trump's America is growing in the Muslim world.

Two developments last Monday punctuated America's increasing isolation. The first was the vote on a resolution demanding the rejection of Trump's decision on Jerusalem. All 14 members of the 15-member U.N. Security Council, including the staunchest U.S. allies such as the U.K., voted for the resolution. The U.S. was alone.

The second was the announcement of the new national security strategy. Trump declared global powers such as Russia and China, middle states such as Iran and North Korea and non-state actors as multiple threats challenging U.S. interests.

While the strategy aims to fight these multiple challenges, it rejects multiple cooperation initiatives such as multiple free trade agreements.

As a result, due to its unilateral and irresponsible foreign policy behavior and conflictual political discourse, Trump's America instigated the rise of anti-Americanism even in friendly countries such as the U.K., Germany, Mexico and Turkey.

Most observers from both the U.S. and other Western circles claim that Trump's strategy is not sustainable and that it will turn out to be self-destructive.

Soon to be a lone hegemon, Trump's America is seen as an unreliable partner by most of its partners and allies. Trump's unpredictable and domestically driven foreign policy discourse confuses not only foreign governments but also most of the American public.

Muhittin Ataman is Director of Foreign Policy Studies at SETA Foundation. He is a professor in the Department of International Relations at Social Sciences University of Ankara. Ataman is also the Editor-in-Chief of Insight Turkey.
Last Update: Dec 21, 2017 2:06 am
RELATED TOPICS