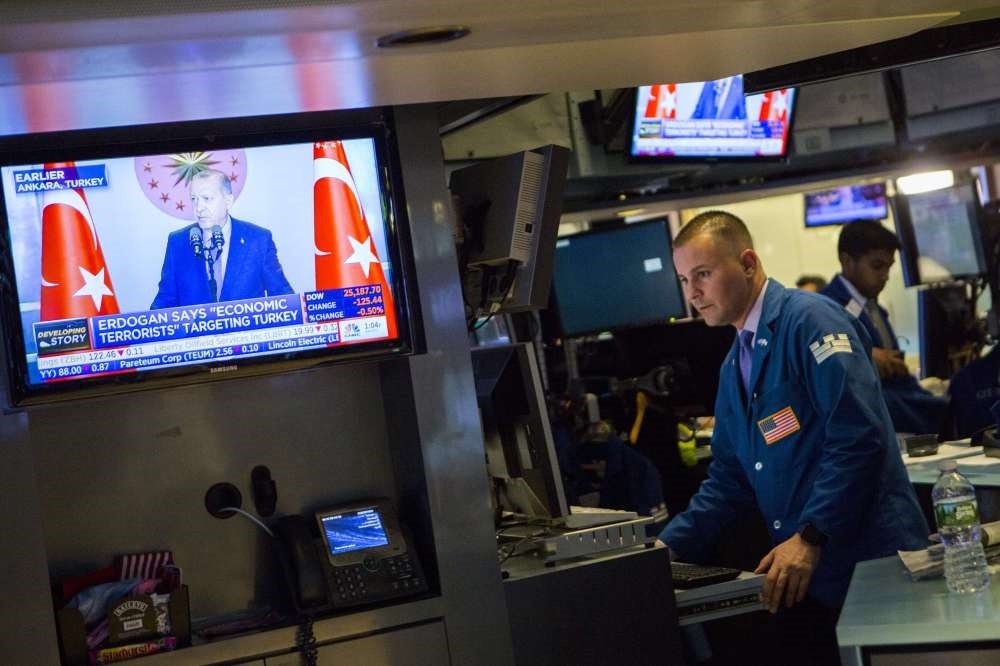 Traders on the floor of the New York Stock Exchange as President Erdou011fan (shown on TV) speaks about the U.S. attacks against the Turkish economy, Aug. 13.
by Muhittin Ataman Aug 15, 2018 12:00 am

The U.S. president continues straining his country's ties with Ankara by making irrational and undiplomatic moves against Turkish national interests

U.S. President Donald Trump has been using belligerent, insulting and threatening language against Turkey and many other rival and ally countries of the U.S. Trump, who declared EU members "economic foes," has been following a hostile foreign policy toward most global powers, such as China, Russia and Germany, since he came to power.

Acting on his instincts instead of American interests, it can be said that Trump's foremost significant political principle is "Trump First" not "America First," since he cares only about satisfying his ego; therefore, most of his political and economic steps have facilitated his wish to remain in power.

Considering the way in which Trump came to power, there are two main domestic reasons behind his assertive and aggressive policy. First, Trump wants to secure his problematic legitimacy and to avoid possible impeachment. As a result, he intends on securing the support of the two strongest groups of constituents in the U.S., namely the pro-Israeli lobby and Christian conservatives – evangelicals in particular.

To get the support of the pro-Israeli lobby, which could prevent him from being impeached, Trump has decided to give a blank check to the Israeli state. He revised U.S. foreign policy toward the Middle East in a way that the Israeli government cannot be held responsible for any violations of human rights or international rules. Trump has also transferred the American embassy from Tel Aviv to Jerusalem, a city that belongs to the Palestinians according the U.N. Security Council decision, also recognized by the U.S. government.

On the other hand, to get the support of Christian conservatives, Trump has exploited the pastor Andrew Brunson issue. Turkey apprehended Brunson after the failed military coup in 2016 for supporting terrorism. Since then, Trump has been using this issue for domestic consumption and has been trying to interfere in Turkey's internal affairs. Most observers are aware that the Brunson issue and economic sanctions on Turkey are artificial problems and a façade to cover up the internal problems of the Trump administration.

Furthermore, irrespective of the difference between the military powers of the U.S. and Turkey, Turkey has to address the threat emanating from the U.S. due to several vital issues and security concerns. Trump's aggression toward Turkey only contributes to the consolidation of Turkish unity and the rise of anti-Americanism in the country. The majority of the Turkish population, about 90 percent of Turks, consider themselves anti-American due to the American support of the PKK and the Gülenist Terror Group (FETÖ).

The Trump administration has been supporting anti-Turkey actors, namely the PKK and its affiliated organizations in northern Syria. Moreover, the Trump administration is trying to create an autonomous, if not independent, region for the PKK south of the Turkish border. This is a red line for Turkey; yet, U.S. officials remain indifferent.

At the same time, the Trump administration has been hosting the leader of FETÖ, the mastermind of the thwarted military coup in Turkey. After the coup attempt, many leading figures of FETÖ took refuge in the U.S., while Fetullah Gülen, the ringleader of FETÖ, has been hosted for years in Pennsylvania. Washington, reluctant to condemn the coup attempt, has been providing security, diplomatic recognition and financial support for FETÖ members living in the U.S. Interestingly, U.S. officials called on Ankara to not take necessary security measures against the coup plotters.

Furthermore, at a time when Turkey was being directly threatened on its southern borders, Washington declined Ankara's request to buy the Patriot missile system it needed to defend itself against violent non-state actors, including Daesh. As a result, Turkey was compelled to reach a deal with Russia to buy the S-400 air defense system. Later, the White House tried to prevent Turkey from buying the much-needed defense system from Russia.

U.S. officials have denied their negative roles in these three main issues, which directly threaten the political independence and territorial integrity of Turkey. While the most recent activities of the U.S. directly threaten Turkish national interests, they still prefer blaming Turkey for the tense relations. All independent observers are aware that Ankara must oppose the U.S.' most recent moves against Turkey. Trump's hostile attitude will damage not only Turkey, but also U.S. national interests in the end.