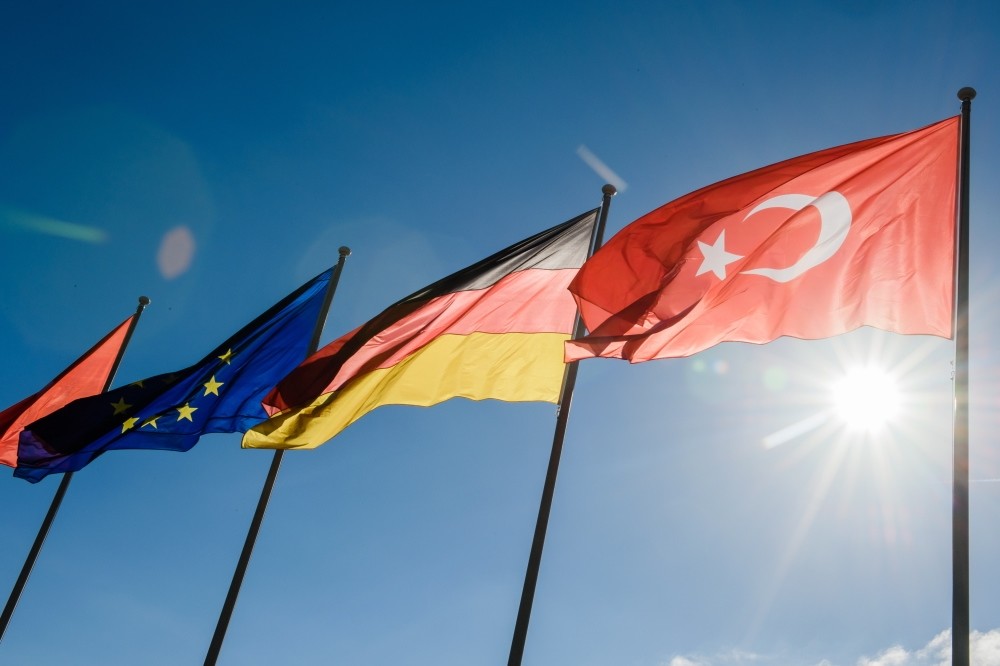 From left to right, the flags of the EU, Germany and Turkey wave prior to the arrival of President Erdou011fan at Berlin Tegel Airport for an official visit to Berlin, Sept. 27.
by Muhittin Ataman
Oct 03, 2018 12:00 am

The normalization of Turkey-EU relations is a development that inspires hope, even as global concerns such as migration, populism, the trade war, security threats and so on grow more intense

Relations between Turkey and European Union members have been weary and conflicting for the last five years. Within this context, different factors emanating from both domestic and external settings have determined their ties.

There are several domestic and/or intra-European factors that influence bilateral Turkish-EU relations. The largest enlargement in 2004 caused many problems for the EU. New member states could meet neither the Maastricht nor Copenhagen criteria. The consequences of such a policy are felt more as the time passes and in September 2018 for instance, the European Parliament decided to punish Hungary for not complying with its criteria and breaching the union's core values. The global economic crisis that erupted in 2008 strongly influenced southern European countries, i.e. Portugal, Spain, Italy and Greece, which ended up in a deep crisis in the eurozone. While the economic crisis postponed many European plans, it created social concerns among the peoples of Europe as well.

Many mainstream political groups have lost their confidence in the EU, that is, euroskepticism has started to prevail. While leftist groups consider the EU as the main agent of the liberal colonial system, rightist groups oppose the EU since it erodes the nation-state by abolishing national identities and increases the insecurity of European peoples by eliminating the borders. It is exactly these perceptions that have started to dominate the EU.

The British referendum, Brexit, which resulted in the exit of the United Kingdom from the EU, further increased euroskepticism. The Brexit vote triggered the discussion of the possibility of the EU's disintegration. However, it seems that Brexit will not be easy. It is not easy for any European country, including the U.K. and Turkey, to give up on the EU.

The EU has been experiencing a leadership crisis since the end of the Cold War and the question of who speaks for the EU is being discussed. Germany has emerged as the most probable candidate. The rise of Germany as the hegemonic power of the EU is a significant new factor, which created a new fault line inside of the EU. Especially after Brexit, the power center of the EU began to change from western Europe to central and eastern Europe. However it is important to emphasize the fact that even though Germany is a "tamed power" for the moment, none of the member states can assure the country will remain that way.

Besides these domestic factors, there are several significant external factors that also influence the bilateral Turkish-European relations. One of the external factors is the refugee crisis, resulted from the Syrian civil war. Hundreds of thousands of Syrians and other nationalities migrated to Europe. The flow of refugees created friction among the EU members. While some called other countries to take joint measures, some others declined the common policy and rejected to bear the cost of migration.

Furthermore, the integration of new migrants also arose as a problem for EU members. In this regard, EU members need Turkey in their struggle against illegal migration inflow. For most European countries, Turkey is the best choice to be a buffer zone between them and the developing world.

The second most important external factor is related to the hostile policies of the Trump administration toward both the EU and Turkey. The unilateral and otherizing American policy toward Turkey and the EU forces both sides to reconsider their relations and to initiate a rapprochement and reconciliation process.

Last but not the least is the external factor – the shifts in the global balance of power. The most recent global developments harm the idea of the EU. Increasing rivalry and conflicts between global powers damaged the dominant liberal values and norms, on which the EU was established. As a result of the increasing illiberalism, realism, and mercantilism in the West, the EU mindset was heavily damaged. The relative decline in the American economic power, unilateral American policies, and the intensifying rivalry and clash between the U.S. and other global powers such as China and Russia, have especially forced EU members to decrease their dependence on the U.S. and diversify their foreign policies.

In conclusion, many domestic and external factors determine the Turkey-EU relations. Overall, while most domestic factors still require the otherization of Turkey, external factors compel the EU and Turkey to cooperate in many issue areas and thus normalize their bilateral relations. In order to improve Turkish-EU relations, the EU needs to revise its political discourse and current mindset. No matter what happens, it is necessary to take concrete steps and redefine their priorities in order to overcome common challenges and threats. Even though Turkey's full membership into the EU still seems impossible, a new conceptualization is needed for their bilateral relations in the coming years.