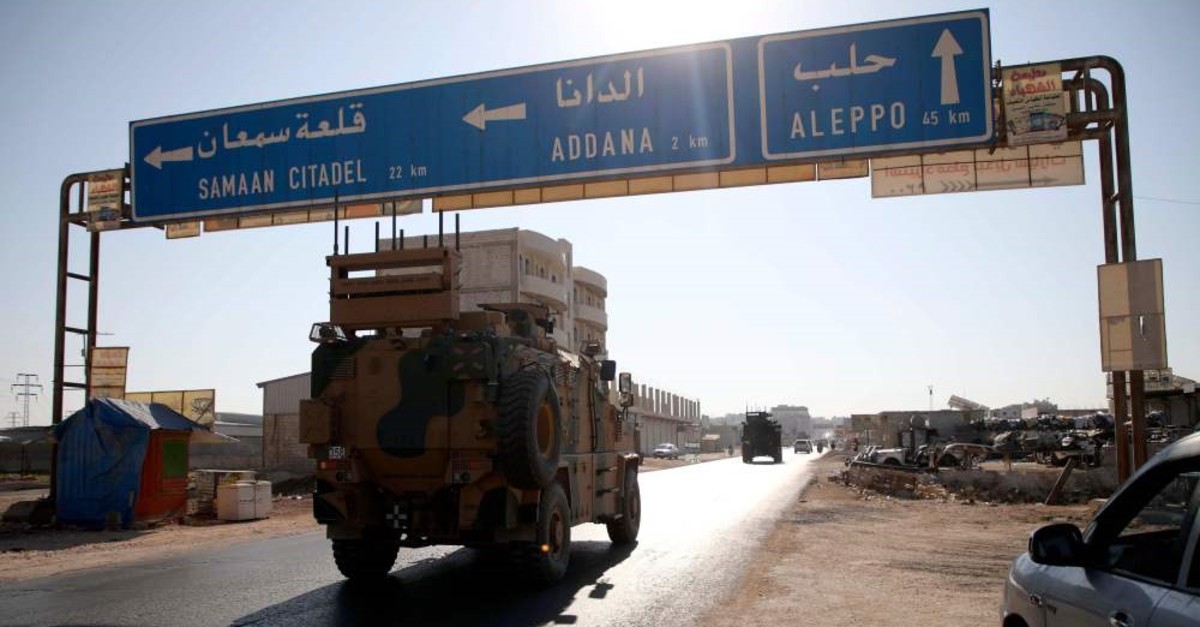 A Turkish military convoy drives along the Bab al-Hawa highway on their way to reinforce a Turkish military observation post in northwestern Syria, Aug. 24, 2019.
by Muhittin Ataman Aug 28, 2019 12:05 am

Considering the military capability of Russia and the U.S. and the game-changing capacity of Turkey, it will take time to reach a real solution in the Syrian crisis

There are two active fronts and three local actors in the Syrian crisis. One active front is the region under the control of the Syrian Democratic Forces (SDF)/People's Protection Units (YPG); the other one is the Idlib region, controlled by Syrian opposition groups. As one of the main domestic actors, the Bashar Assad regime does not want to fight with the YPG. At least for now, the Assad regime is focusing on the Idlib region only, not the region under the control of the SDF/YPG.

Fighting with the YPG is not a priority for the regime in the short run. Similarly, the YPG has been focusing on the areas east of the Euphrates only. However, the Syrian opposition groups supported by Turkey are the ones that are fighting on two different fronts. That is, the opposition groups are targets of both the SDF/YPG and regime forces. Therefore, the position of the opposition groups is more vulnerable than that of the other two domestic actors. On the other hand, there are four major external actors, namely the United States, Russia, Turkey and Iran, dominating developments on the ground in the crisis. While Turkey considers both fronts as vital for its Syrian policy, the other three actors focus on only one front.

Russia and Iran have been supporting the Assad regime from the beginning of the crisis. They do not fight the SDF/YPG.

On the contrary, even though the YPG controls one-third of Syrian territory, both Iran and Russia have friendly relations with the YPG.

Russia, who has close relations with the YPG, has been cooperating with it in the Tal Abyad region, especially since Turkey's Operation Olive Branch. For Russia, as long as the YPG does not target regime forces, the YPG is tolerable, even a potential strategic partner.

Similarly, for Iran, the YPG is a workable actor since it has been threatening Turkey's position in Syria. Considering the regional balance of power, Iran has been manipulating the PKK and its offshoots as political instruments against Turkey's regional effectiveness.

The U.S., on the other hand, has been trying to consolidate the power of the YPG in Syria. The U.S. eliminated Daesh from the northeastern part of the country and left the area to YPG forces.

Nowadays, it has been trying to protect the YPG from a possible Turkish military operation. Controlling one-third of the country and the majority of natural resources, the YPG is consistently supported by the U.S, both financially and militarily.

The U.S. does not hesitate to support the Syrian branches of the PKK, which is recognized as a terrorist organization by the U.S. The U.S. government does not struggle against the regime. While the U.S. publicly declares that it is in favor of the ousting of the Assad regime, it has refrained from taking the necessary measures against the regime.

When it comes to Turkey, we observe a different picture. As a neighboring country sharing a long border with Syria, Turkey has to fight on both active fronts of the Syrian crisis.

The SDF/YPG front is vital for Turkey's national interests, including its territorial integrity. As the Syrian offshoot organization of the PKK, the YPG constitutes a major threat for Turkey in the long term. The developments in the Idlib region come into prominence as a humanitarian and a national security issue due to the vulnerability of the refugee problem.

However, when closely looking at the developments on the ground, one can see that the U.S. and Russia do not have totally exclusive perspectives on the Syrian crisis.

At least, the two countries agree on certain issues, including support of the YPG, the continuation of the Assad regime, weakening opposition groups and deterring any attack against Israel.

It is now clear that neither the U.S. nor Russia want a strong and stabilized Syria. The continuation of the crisis provides a convenient environment for them to insert themselves into the crisis.

As a result of the tacit cooperation between the two global powers, their influence on the ground has dramatically increased.

It is a challenge for Turkey to confront both the U.S. and Russia in Syria. Eventually, the level of cooperation between these two global powers and Turkey's ability to play these two countries against one another will largely influence the success of Turkey in Syria.

Considering the military capability of these two global powers and the game-changing capacity of Turkey, it will take time to reach a real solution in the Syrian crisis.