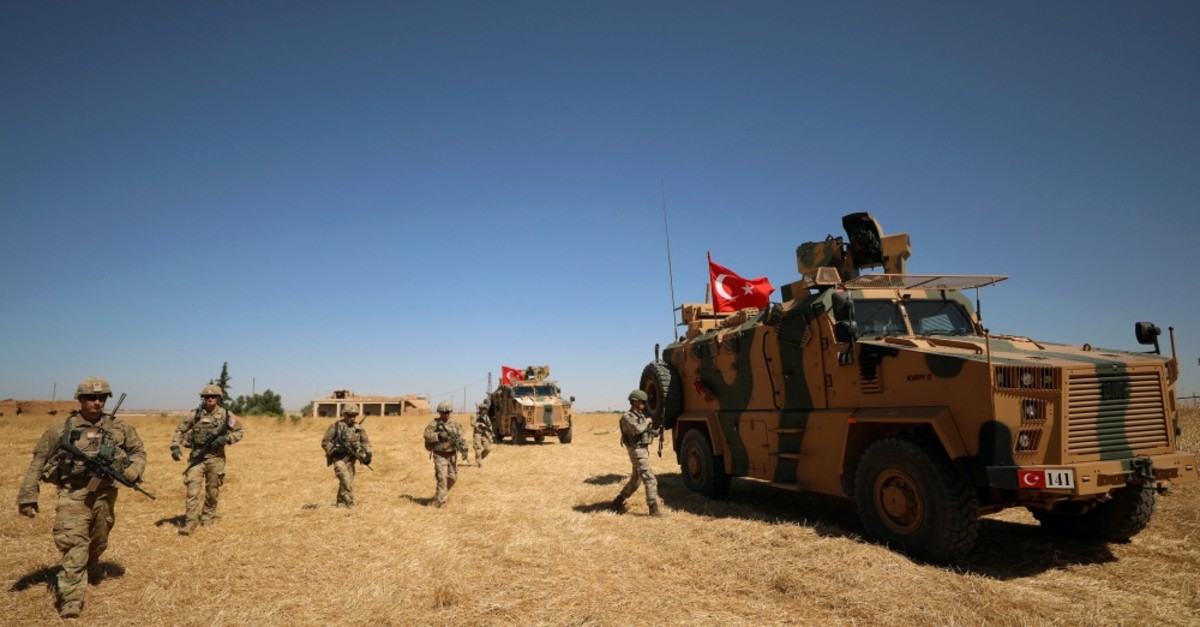 U.S. soldiers stand guard during a joint patrol with Turkish troops in the Syrian village of al-Hashisha, on the outskirts of Tal Abyad, along the border with Turkey, Sept. 8, 2019.
by Muhittin Ataman Sep 11, 2019 2:12 am

The Syrian crisis is not something that can be handled solely through Turkish efforts; the region's biggest problem needs to be confronted by both external and internal stakeholders

Four main parameters are determining Turkey-U.S. relations regarding the Syrian crisis, in which each country has its own priorities. I will briefly discuss Turkey's Syria policy, the reactions of the U.S. and how they attach greater or lesser importance to these parameters. The first parameter is the creation of a safe zone. For Turkey, there are three sources of motivation and three main targets to achieve with the creation of the safe zone: The security of Turkey, the return of the Syrian refugees and the security of Syrian civilians living in Syria. Turkey asks for the removal of the PKK-affiliated People's Protection Units (YPG) from its border. At a time when the PKK is weakened inside Turkey and faces a strong challenge in northern Iraq, Turkey does not want the east of the Euphrates to be a safe haven for them. The U.S. insistently continues to support the YPG although it is known that the YPG is the Syrian offshoot of the PKK, which is recognized as a terrorist organization by the U.S. government.

However, the U.S. does not want to pacify or weaken the YPG in the region and wants to maintain it as an effective, functional tool in its regional policy.

Turkey intends to defuse the heightened tension and lighten the burden emanating from Syrian refugees living in Turkey. Considering Turkey's economic problems and the indifference of global states and institutions, the current refugee situation is not sustainable. It is necessary to resettle some Syrians in the planned safe zone, controlled by Turkey (and the U.S.), but not by the YPG or its umbrella group, the Syrian Democratic Forces (SDF).

The YPG is systematically dismantling the region's demographic and sociopolitical structure. Thus, Turkey insists on changing the fait accompli created by the YPG. It is necessary to restructure the regional balances and to assure the return of the previous – rightful – inhabitants.

Turkey expects diplomatic, political and economic or financial support from the Western countries. The U.S. does not want to weaken the YPG's position in the region. Hence, all calls for changes in the demographic structure in the region falls on deaf ears.

The second parameter determining Turkey's Syrian policy is the future of the Idlib region. Today, there is no country opposing the continuing bombardment of the region by the Assad regime and Russian forces.

Turkey is the only country supporting the Syrian opposition fighting in the region. The continuation of heavy attacks may end up with the mass killings of innocent civilians and an additional 2 million refugees to Turkey. That is, if the Assad regime is not stopped and the de-territorialization of the Syrian opposition is completed, the new wave of attacks will cause another humanitarian crisis and huge security concerns, not only for Turkey but for European countries as well.

Since Turkey's capability and capacity in preventing the negative course in Syria is limited, other states that will be negatively influenced by the possible developments must take initiatives and support Turkey.

Otherwise, Turkey will not bear the cost by itself. Contrary to European countries, the U.S. will not be influenced by a possible wave of refugees and thus it generally remains indifferent to the future of the Syrian people living in the region.

The third parameter is the constitutional process, the Geneva Process and the establishment of the Constitutional Committee. The political process continues, but the process cannot proceed independently of the realities on the ground.

The U.S. does not have a holistic approach toward the Syrian crisis and does not take all parameters into account. If the Assad regime de-territorializes the Syrian opposition, the work being done at the negotiation table will lose its meaning.

The regime will remain by itself and nothing will change after all these heavy costs in the last decade. Considering the Assad regime's close relations with Russia and Iran, the U.S. will lose the ground in favor of two adversary states.

The fourth parameter is the future and possible comeback of Daesh, one of the main reasons for the justification of the intervention of the global powers. Even after the de-territorialization of Daesh, the U.S. continues to take measures to prevent the re-emergence of Daesh in Syria.

However, both Russia and the U.S. neglect the discrimination of the Sunni Arabs, who constitute the majority of the Syrian population and are considered as the main source of Daesh recruits.

Taking all these factors into consideration, Turkey and the U.S. will continue to follow different and mostly conflictual policies in the Syrian crisis. The ultimate end of the crisis will greatly influence the regional policies of both Turkey and the U.S. However, the Syrian crisis is a matter of vital importance for Turkey, but not for the U.S. At the end, the alternative costs of their policies will determine this relationship.