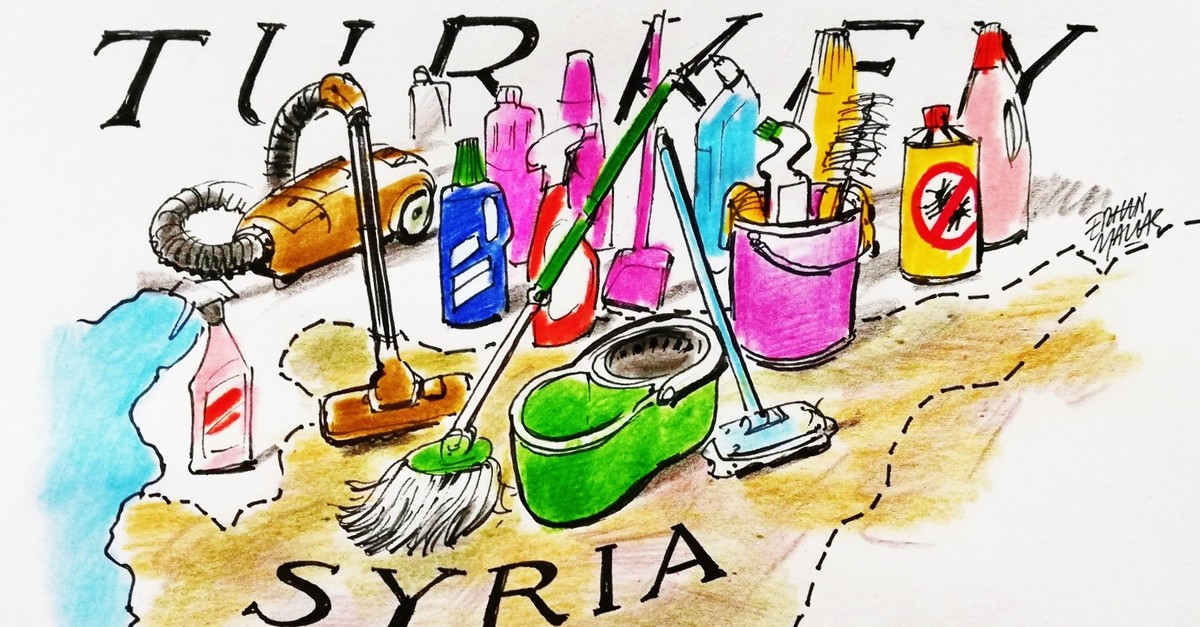 Turkey has been repeatedly emphasizing its determination to clear its border with Syria from terrorist elements. For this reason, Turkish officials have been trying to persuade their American counterparts to stop supporting the People's Protection Units (YPG)/Syrian Democratic Forces (SDF) and not to oppose its long-planned military operation.

U.S. President Donald Trump has several times promised President Recep Tayyip Erdoğan that the U.S. would withdraw from Syria; however, this was never realized. As a result, the ongoing American financial and training support for the YPG/SDF has created tension in Turkish-American relations.

After a series of bilateral diplomatic and technical negotiations between politicians and military, the expected step was taken on Sunday after a phone call between President Trump and President Erdoğan.

The United States government declared that it will withdraw American troops from northern Syria. The U.S. government explained that it "will not support or be involved" in the military operation. After a long time, the U.S. forces made a physical change on the ground and withdrew their troops from two observation points in Rasul Ayn and Tal Abyad.

These latest developments paved the way for the Turkish military operations and caused furious reactions from different groups of American political actors including Republicans, Democrats, the pro-Israel lobbies, televangelists and certain media outlets.

These reactions mainly emanate from different settings for different reasons. First of all, Turkey's quest to pursue a more independent foreign policy in its region has triggered a strong negative perception of Turkey in the U.S. A large part of the American establishment, including the Pentagon, began to take an anti-Turkish stance.

Traditionally the military establishment is known as the most pro-Turkey due to their joint efforts within the context of NATO. However, recently the military, especially U.S. Central Command (CENTCOM), which is responsible for the Syrian crisis, turned out to be the most anti-Turkey actor. As a result of the otherization of Turkey by its most significant ally, Turkey began to lean toward Russia and some regional powers, which instigated the further otherization of Turkey in the U.S.

Second, ultranationalist, neoconservative and evangelist circles regard Turkey as an enemy due to their anti-Islamic standpoints. For these groups, Turkey is not a long-time NATO ally who has been fighting side by side with American soldiers in Korea, Somalia and Afghanistan, but rather a state sponsoring terrorism and radical movements.

These groups consider not only Turkey but also all Muslim states as potential or real threats to their way of life and want to take preemptive measures against these states. Therefore, they ask the government to contain Turkey in the region.

Furthermore, many political actors feel themselves closer to secular and leftist groups in the Middle East. Therefore, they prefer to support the YPG/SDF instead of the mainstream Syrian opposition, which is composed of different Islamic, traditional and liberal groups.

Third, the Israel factor plays a determining role in the otherization of Turkey in the U.S. Allying itself with the United Arab Emirates (UAE), Saudi Arabia and Egypt, Israel has been trying to sideline Turkey in the regional balance of power and has been mobilizing the pro-Israeli lobbies in the U.S. against Turkey.

These lobbies force American officials to pass anti-Turkey acts from the U.S. Congress in order to prevent possible Turkish dominance in the region. Furthermore, whenever an issue is promoted by the pro-Israeli lobbies, it gets bipartisan support in the Congress and the mainstream media.

Fourth, the main reason for the U.S. intervention in the Syrian crisis is the struggle against international terrorism, Daesh in particular. The future of Daesh militants captured in prisons and camps inside Syria is another factor determining the new American approach. Many circles, including Gülenist Terror Group (FETÖ) members living in the U.S., insistently claim that the Turkish government has been supporting Daesh, while Turkey is the most successful country struggling against Daesh.

It is clear to everyone that the main reason is the further otherization of Turkey and damaging Turkey's image in the West.

The Trump administration has explained that Turkey will be responsible for all suspected foreign fighters in Daesh. Turkish officials have assured the American side that it will not tolerate Daesh in any form.

Eventually, Turkey is determined to eradicate the threat on its border, irrespective of the cost that it will bring, since northern Syria is considered one of the main sources of threat toward the national security of Turkey. Turkey will not negotiate whether to intervene or not, but it will only negotiate the timing and the scale of the intervention.