Gaziantep: Reason behind the attack 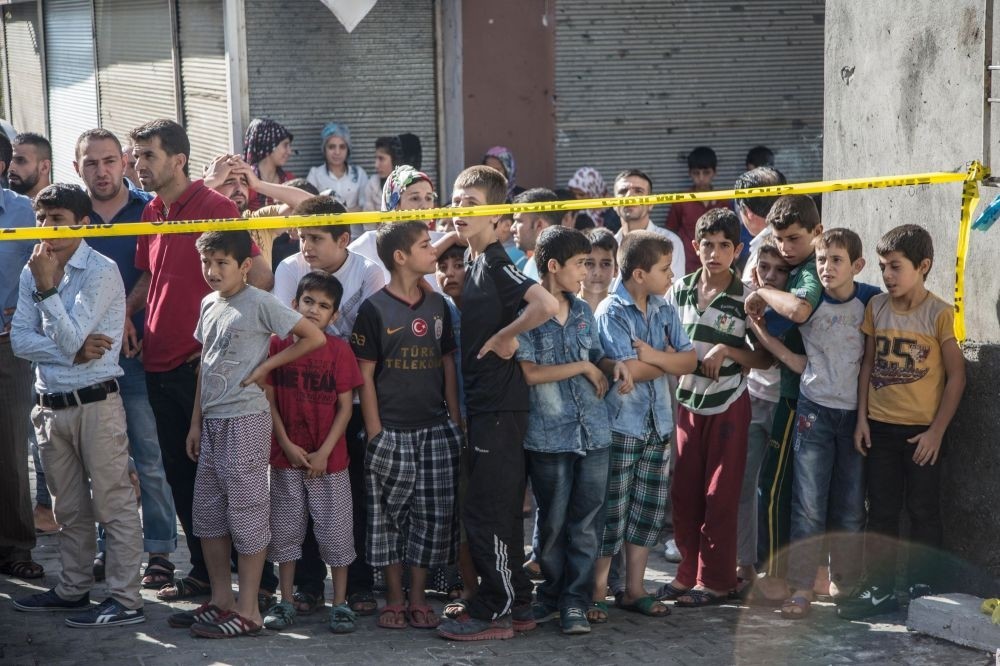 People standing near the explosion scene following the latest attack on a wedding ceremony that left 51 dead and 69 wounded in southeastern Gaziantep province near Turkey's border with Syrian on Aug. 21.
by Beril Dedeoğlu Aug 23, 2016 12:00 am

The 'fight against DAESH' is the formula used for the ongoing proxy wars in the Middle East. That's why the game is not between DAESH and the PKK/PYD; terrorist organizations are merely tools at the service of others

Ever since the beginning of the Syrian civil war, Gaziantep has been known as a city of refugees. Syrians aren't the only refugees in the area, however. Many Turkish and Kurdish families from eastern Turkey moved to the city, as well, to flee the pressure of the PKK.

The PKK has always forced local people to make a choice: either support the terrorists or remain loyal to the government. Those who didn't want to feel that constant pressure simply left their homes.

The families, who were holding a wedding in the streets of Gaziantep last weekend, were one of those Kurdish families who moved to the city in the hope of returning to a more normal life.

In the middle of the street party, a 12-year-old suicide bomber detonated his charge, killing 51 people. Most of the victims were kids, just like the bomber. What is this "cause," that would be won by killing scores of innocent people, and having them killed by transforming little kids into murderers?

It is obvious that those behind this terrorist act are not worried about winning anything; they just want to destroy the world. According to the first reports, the attack was carried out by DAESH. It was noteworthy that deputies from the Peoples' Democratic Party (HDP), a political party represented in Parliament with connections to the PKK according to many claims, rushed to the city right after the attack. The Syrian branch of the PKK, namely the Democratic Union Party (PYD), is nowadays presented in the foreign media as the only local armed group who efficiently fight DAESH.We know, however, that there are many players who fight DAESH: Assad's forces, Iran, Russia, the U.S... What we don't know is why all these forces have been unable until now to eradicate this radical group, and why Kurdish fighters are being seen as key players.

The "fight against DAESH" is the formula of the ongoing proxy wars in the Middle East. That's why the game is not between DAESH and the PKK/PYD; terrorist organizations are just tools at the service of others. Moreover, all these terrorist groups keep attacking Turkey.

The PKK/PYD seeks to establish a Kurdish state in the territories of Turkey, Syria and Iraq and govern it according to Marxist-Leninist secular principles. DAESH, on the other hand, is planning to create its own state and to rule it according to so-called Islamist principles. So the "countries" they are dreaming about are completely different from one and other, and as a result, their foreign allies are different. It seems, however, all these players have a common enemy: Turkey.The Gaziantep attack, and all the attacks before it, had one particular purpose: to draw Turkey into the Syrian conflict. If Turkey decides to intervene militarily into Syria, then Turkey may turn into the country the Gulenist Terror Group (FETÖ) is dreaming about.

A number of countries want Turkey to play the leading role in the fight against DAESH, but many of them oppose Turkey when it wants to fight the PKK/PYD. Nevertheless, Turkey is being attacked by both organizations and if it fights in Syria, it will most probably retaliate against both. That's a problem for many in the West.

Nevertheless, if Turkey decides to take a new course in Syria, it will almost certainly coordinate its actions with Russia and the U.S. That's why those others who have plans for Turkey should ask Russia and the U.S. what they think about those plans.
RELATED TOPICS