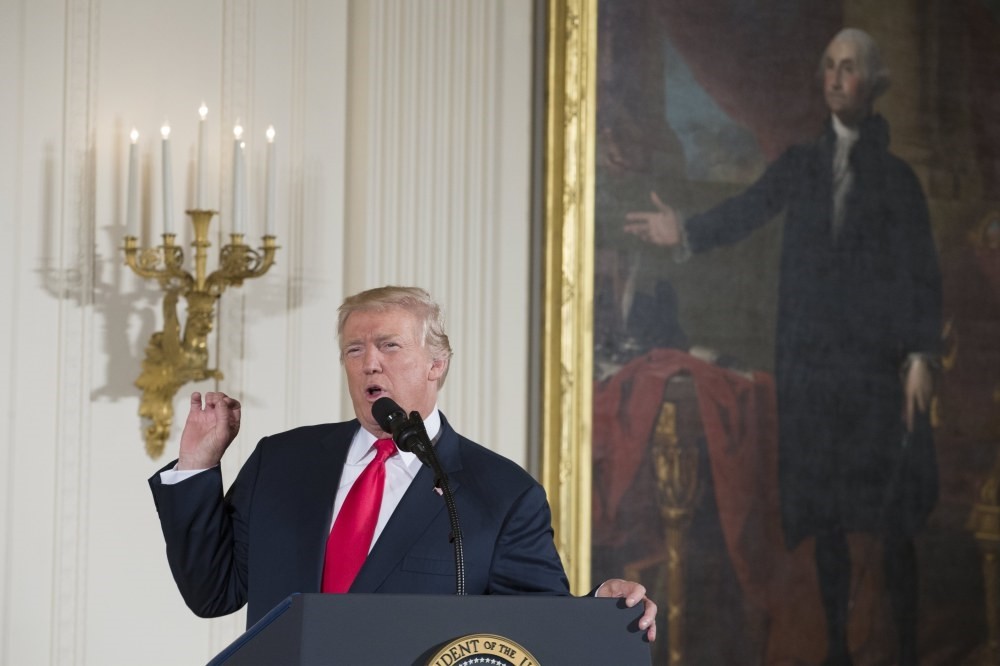 President Trump delivers remarks beside a portrait of George Washington during a ceremony in the East Room of the White House in Washington, D.C., July 31.
by Beril Dedeoğlu Aug 02, 2017 12:00 am

Trump's uncertainty in following policies directly costs the U.S. a lot, but what's worse is that it has negative effects on the international system, as well

It is not even sure whether U.S. President Donald Trump will be able to remain in the White House until the end of his term in office. He keeps reshuffling his Cabinet while the reforms he wants to undertake are refused in Congress or invalidated in courts. He decided to impose a laptop ban on flights from a number of countries, including Turkey, only to abrogate that ban two months later. He is selling weapons to both Saudi Arabia and Qatar at a moment when these two countries have fallen out on each other. He is trying to enhance cooperation with Russia and, in the meantime, he signs new sanctions on the country.The entire world would like to have a more predictable United States. Many countries face difficulties in adopting a clear-cut position about world events because of this ambiance of uncertainty. Countries are not able to know for sure where the international system is headed to at the moment.

Some commentators believe this uncertainty is, in fact, the new American strategy. According to them, Washington now believes it is less costly to wait and see how other countries will act on their own without the U.S.'s guidance. In other words, the U.S. now prefers others make their own decisions first, before making one itself.

The problem is that since Trump became president, no country has been able to adopt a solid position on anything; everyone waits to understand what the Trump administration will do. Some countries, though, have begun acting on their own, suggesting that this uncertainty and the absence of the U.S. will allow them to fulfill their national strategies. This, however, only makes the international system more unstable, as everyone may want to maximize their own interests in their own way and in the short term.

There is, nonetheless, something certain that is going on in international politics, mostly with the contribution of Russia. Under former President Barack Obama, great powers have chosen to struggle with each other through proxy wars. They have used and supported all sorts of non-state players, including terrorist organizations, to fulfill their aims. To understand what this policy's price is, it is enough to look at what is happening in Syria.

This proxy war method, used not only by Obama's U.S., but by many other great powers, has caused a series of uncontrollable and unfruitful struggles. First of all, non-state players have their own agendas and they are not doing only what they are being told, as they shift their allegiances easily, making it quite impossible to understand for whom they are fighting. Maybe that is the reason why Trump believes the proxy wars should be over. That is why he is talking all the time about states, enemy states and friendly states. He does not talk about Latinos, but Mexicans, and his interlocutor for tackling the immigration problem is the Mexican government. He does not enumerate terrorist organizations, but he is targeting Iran as their sponsor. North Korea is the name of the danger, and when something has to be done about it, he calls on China to act, as he expects the Chinese government to do something about international trade. In brief, threats are no longer abstract, it is not about vague concepts such as terrorism, global warming, immigration or nuclear proliferation, it is about Iran, North Korea, China and so on. He is not waiting for non-state players to achieve something on the ground, but he is directly asking governments to act or to stop acting.

The good news is that the uncertainties about threats and their origins will therefore diminish, but the bad news is that the risk of interstate wars will grow stronger. In other words, the international system will once again take shape through wars between states instead of proxy wars fought by terrorist organizations.