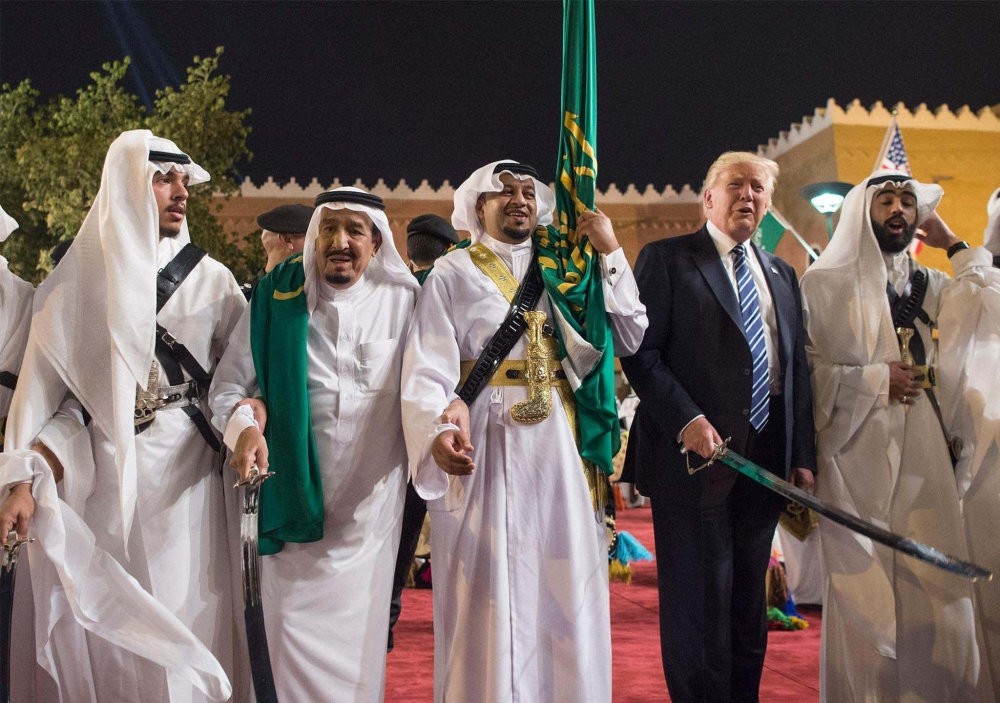 Donald Trump with Saudi Arabia's King Salman bin Abdulaziz seen during a welcome ceremony with traditional sword dancers at the Murabba Palace in Riyadh, Saudi Arabia, May. 20.
by Beril Dedeoğlu Sep 12, 2017 12:00 am

If the Trump administration remains incapable of following a coherent policy in the Gulf crisis, it will risk its superpower position in the international community

A diplomatic row erupted suddenly between Qatar and a bloc of countries: Saudi Arabia, the United Arab Emirates, Bahrain and Egypt. The profound reason behind the crisis was the Saudi Arabia-Iran rivalry, along with some of Qatar's choices that did not please the Saudi-led bloc, and of course there was the role of oil and natural gas, which are always a factor in crises of this region.

These four Arab countries conveyed a list of ultimatums to Qatar, to-dos in order to lift the sanctions they had imposed. The list of ultimatums only made things worse, as it was quite impossible for any independent country to accept. It nearly labeled Qatar a terrorist country, asking it to become some sort of a vassal state or a province of Saudi Arabia. Qatar naturally refused.

In the meantime, a number of countries offered to mediate, including the United States. The U.S. has close relationships with both Saudi Arabia and Qatar, including military bases, so it was not desirable for Washington to choose one side or the other in the conflict. The U.S. has proven it has no intention of cutting ties with any of these countries, as it has continued to sign very lucrative weapons sales agreements with both the Saudis and Qataris during the crisis.

Last week, the emir of Qatar called the Saudi crown prince and told him he is considering negotiating, concerning the ultimatum, in order to find a solution to the crisis. In other words, he made it clear his intention to end the dispute peacefully through diplomatic negotiations.

It was an interesting initiative because it came as a surprise in a moment when the world had almost forgotten there was a crisis between the Saudis and Qatar. The reason behind this call was American pressure. The two sides explained that U.S. President Donald Trump called and asked them to find a solution to their crisis as soon as possible. It appears Trump believes the crisis can be resolved fairly easily, and he knows that it is only Iran that benefits from the rift between American allies in the Gulf. The U.S. still has no intention of choosing between its allies, so it wants them to act together like before.

The problem is that negotiation and conciliation are not unilateral processes, the negotiating sides are supposed to find a common ground if they want to reach a fair deal. In other words, if Qatar accepts some of the demands, the Saudis must understand they cannot totally impose their will on Qatar, which intends to remain independent. Nevertheless, the Saudis were probably unwilling to find a compromise, so they refused Qatar's proposal to negotiate.

Saudi authorities have accused Qatar of not being sincere and repeated their ultimatum. This is a vicious cycle, because it is obvious that Qatar would not ask to negotiate just to accept all of the Saudi's demands. If Saudi Arabia does not accept the principle of making concessions, what is the point of negotiating?

The U.S., which plays a mediating role, is probably aware of all this and that the Saudis have no intention to negotiate with Qatar. Perhaps Saudi Arabia prefers to negotiate directly with the U.S.

Former President Barack Obama's administration had decided to distance itself from the Saudis, but Trump has genuinely tried to correct this. Still, the U.S. has a problem with deciding who its real friends and enemies are. It is making both Saudi Arabia and Iran angry, its relations are worsening with both Russia and the European Union, it wants to cooperate with both Turkey and the PKK's Syrian affiliate Democratic Union Party (PYD), and it is talking about imposing sanctions on China while it asks Beijing to put pressure on North Korea. The U.S. would better give clear-cut decisions otherwise it will not be able to pursue any coherent foreign policy soon. And if the U.S. proves unable to make plans, it risks becoming a player in others' plans.