What's the point in hurting the believers? 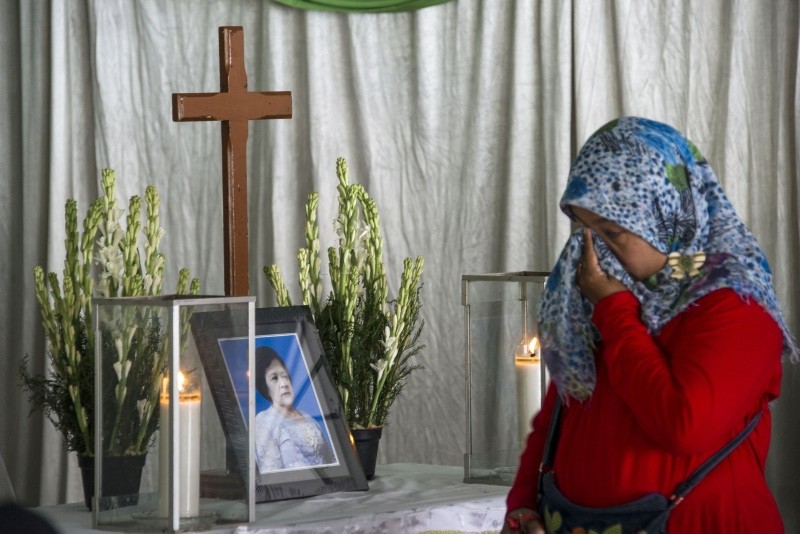 A mourner grieves by the memorial and coffin bearing the remains of Sri Puji, one of the victims killed during the May 13 Pantekosta church attack, ahead of her funeral in Surabaya, Indonesia, May 14.
by Beril Dedeoğlu May 15, 2018 12:00 am

Terrorist attacks are drawing away Muslims from the rest of the world. All the while, some European scholars are doing nothing to prevent this polarization but instead reiterating it

Three churches were attacked in Indonesia on Sunday, an incident that claimed a lot of lives. The attacks were carried out by a terrorist group called the Jemaah Anshorut Daulah (JAD), and inspired by Daesh. On Saturday night, another terrorist attack took place, this time in France. A man, born in Chechnya, stabbed random people on a busy street in Paris. For some time now, we have been hearing almost on a daily basis about these kinds of attacks.

It is not possible for these terrorist groups to reach their objectives with these bloody attacks. On the contrary, these attacks reinforce the states' determination for the fight against them. Radical groups are forcing different countries to come and work together. The worst part is these terrorist attacks are making it all the more difficult for the Muslim world to build a constructive relationship with everyone else.

These groups, who claim that they are acting in the name of Islam, are only helping in forming a negative perception of Muslims among non-Muslims. Maybe this is what these organizations are exactly for – their purpose is to make different faith groups hate one and other, and they want to make sure that people from different cultural backgrounds don't trust each other. We must admit, they are quite successful in doing just that. Unfortunately, intellectuals, opinion leaders or politicians are not really helping either, when they react to these incidents in a controversial manner. The open letter signed by 300 leading figures in France to change the Quran is just a recent demonstration of this fact. This declaration has been worded in an ambiguous manner, but not carefully enough to hide the mentality behind it. According to the text, the main motivation source and reference of the terrorists is the Holy Quran. They suggest a number of verses in the Muslims' sacred book are being used by terrorists to justify their attacks. In other words, they have identified Islam as the root of the problem. So they are calling Muslim theologians to develop a new interpretation of these verses.

These 300 people have just given one more argument to those who already think that Islam is a religion that allows violence. These kinds of initiatives are only exacerbating existing prejudices in Western societies against Muslims, while the actions of radical groups who commit senseless attacks are also reinforcing these prejudices.

It is rather unfortunate to link religions with violence, even though we know that history is full of wars conducted in the name of religions. The reasons of armed conflicts are always more complex than that, and there are always profound political and economic reasons to explain wars. Nevertheless, as religions have frequently been used as a cover, societies are being led to believe that faith is to be blamed for all the violence. The religious identities make it easier for people to discriminate between "us" and "the others," and this entire ambiance helps hide economic and strategic interests.

Moreover, the open letter published by French personalities talk about Islam in France. This is particularly provocative. Since when have universal belief systems been interpreted differently according to the countries they are being practiced in? As France is a country where secularism is being cherished, one would think that every citizen has the right to interpret his or her faith without the intervention of the state.

In other words, we believed people were supposed to respect everyone's understanding about their own religious interpretation. We know things are different in the U.S., for example, where the evangelicals criticize the fact that their country does not have an official religion, as they often say "the U.S. has a land, a flag, a people, but how come not a religion?" Is France adopting such a view now? Why are those French intellectuals so willing to link the Muslim faith to violence and why do they keep looking for modifications in the Quran's interpretation? Don't they see that they are hurting the feelings of the pious and peaceful believers?