What is the life of an immigrant worth in Europe? 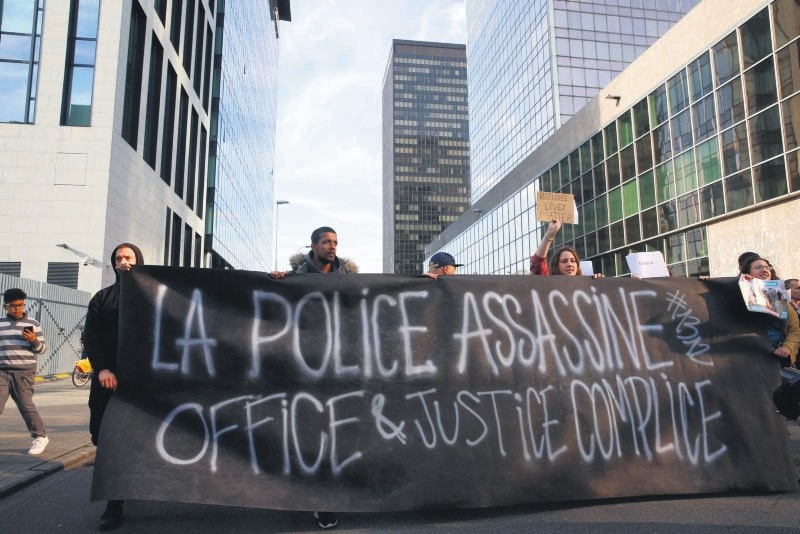 Members of several associations for the defense of asylum seekers' rights attend a protest in front of the immigration office in Brussels after a three-year-old girl died during a chase with police, May 18.
by Beril Dedeoğlu May 22, 2018 12:00 am

In European countries, some principles like democracy and human rights are easily forgotten when it comes to Middle Easterners, even those they once favored

A terrible incident occurred last week in Belgium. The police wanted to stop a suspicious van. It turned out the van was carrying 30 people, including four children, and it didn't stop. So police decided to chase it and after a long while they decided to finally shoot at it. As a result, a two-year-old Kurdish girl has died.

If this wasn't about immigration and a similar incident occurred involving a regular van and a child passenger died because of a police bullet, Belgians would be creating an uproar. People would be demanding the authorities to find the perpetrators and there would be police officers and even government officials submitting their resignations. However, as the incident was essentially about illegal immigration, the debate has shifted to totally other directions.

It appears that even the traditional Flemish-Walloon dispute had an impact over this debate, as every side wanted to use this tragic incident against one and other.

The fact that the individuals in the van were illegal migrants probably incited the police to chase them. They indeed made a mistake when they didn't stop when police told them to, but we don't know if they committed any other crime. No one has reported that they used any type of weapons against the cops while fleeing, for example. But the police used their firearms easily, simply because they think they are allowed to when they are dealing with Middle Eastern immigrants. Maybe it is not official, but police know by instinct that they will not get into real trouble if they kill illegal immigrants.

These people didn't stop because they knew what would happen to them if they did. These are people who had to flee their country either because of Daesh, or because of Bashar Assad's army, so they were definitely not in Belgium as tourists. Belgium wants people whose human rights are violated to be saved and protected, but like every other European country, it wants other countries to provide this protection. That's why those refugees knew exactly what would happen to them if they stopped. They would probably be expelled from one country to another, and would finally have been forced to leave European soil for good.

This hard policy has caused the death of an innocent little girl, and a police officer will have to live with that for the rest of his life.

The Belgian Interior Ministry, however, announced that the police were not guilty, demonstrating that killing refugees is not considered a big crime anymore. The ministry has even accused the parents of the child, saying that this little kid was just being used by their parents and human traffickers. In other words, Belgian authorities are satisfied with themselves because they prevented the little girl from being exploited by illegal immigration networks by killing her.

We know that Belgium is a country of democracy and human rights, but when it comes to Middle Easterners, some principles are being forgotten too easily.

On the other hand, this is not only a case of disproportionate police violence, or how revolting Europe's immigration policy has become. There is also a Kurdish dimension in this story. We know that Belgium has been tough against refugees from Syria, Iraq or Africa, but we also know that, traditionally, they have always been more receptive when it came to Kurds. We remember several diplomatic crises with Turkey because Belgium had offered asylum to people involved in separatist movements in Turkey.

It appears the current understanding about chasing Middle Eastern immigrants includes everyone now, even those groups who were habitually supported by the Belgian government. This is of course not to rejoice because Belgium had put a stop to its Kurdish policy, and now treats every Middle Eastern equally. Because equality for Middle Easterners often means they are dying equally.