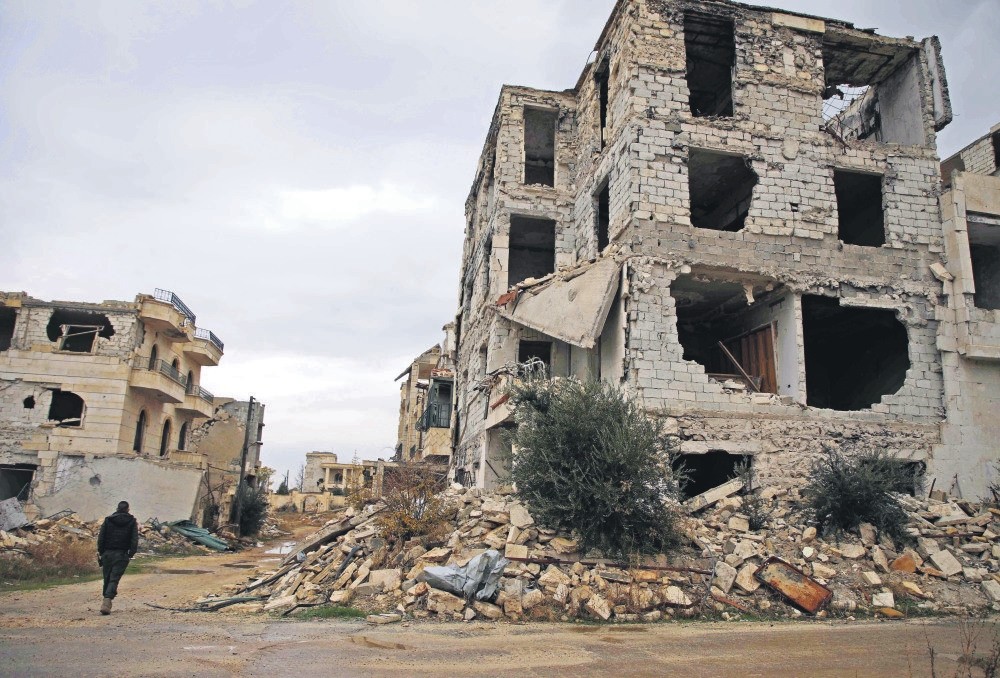 A view of a building damaged by Russian airstrikes in the Syrian opposition-held al-Rashidin district of western Aleppo, Nov. 26.
by Beril Dedeoğlu Nov 27, 2018 12:00 am

Russian airstrikes in Aleppo send a message to the U.S. that Moscow is still the main player in Syria and the Kremlin will not leave space for Washington's allies

Russia carried out airstrikes on the Syrian city of Aleppo and according to Moscow it was against terrorist groups that used chlorine gas. Russia has frequently been using the expression terrorist or pro-terror groups to identify a number of militants operating in Syria. The term pro-terror, especially, is a new contribution to security studies literature. We are used to terms such as terrorist, terror attack, terrorist organizations; but the term pro-terror is quite vague. Pro-terror groups probably mean people who are not carrying out terrorist attacks themselves, but who applaud those who do.

Russia is indeed accusing opposition groups in Syria of making use of chemical weapons. These groups include the Free Syrian Army (FSA), but not exclusively, as we know the number of armed groups is quite high in the Syrian theater. Because of the current understanding between Russia and Turkey, Moscow does not qualify all the opposition groups as terrorists, but it reiterates there are many radical elements that have infiltrated armed organizations.We do not know if Russia's intelligence in Syria is powerful enough to identify radical elements within each group. Russia knows a lot, that is for sure, and most of its information comes from the Syrian government run by Bashar Assad.

The area hit by the Russians last weekend was one of the safe zones as designated via the Astana process. Russia claims the first attack came from the rebels, they used toxic gas and Russia had to retaliate. No matter what, we have to admit that the strike will benefit the Assad regime. There are many reports about the use of chemical weapons by the Syrian government forces, but now the Russians are saying opposition groups are the ones using weapons of mass destruction. This will certainly reinforce Assad's position.

Have the opposition groups really used chemical weapons, knowing that this will get them into trouble? Is it possible that they are unaware that no state will back them if they used toxic gas? Maybe they have not used it, but Russia has preferred to treat them as though they did.

Russia has also announced that it informed Turkey about the strikes beforehand. This detail proves that the Russian action was not targeting Turkey. Russia insinuated that it bombed radical groups supported by a third power.

Not everything that serves Assad's interests means they harm Turkey's interests. This strike proves that the Assad regime, Iran and Russia are now targeting another regional power that wants to play a role in the Syrian war. It is obvious that this targeted country's actions are disturbing Turkey, as well. That is why Turkey has met these strikes without protesting loudly, because this third country in question, which is Iran's main foe in the Middle East, has not been very friendly with Turkey lately.

Russia remains the main player shaping the situation in Syria, and Moscow is determined to limit the radical organizations' room for maneuvering. This is also a warning conveyed to Washington. The country Moscow targeted with its strikes is currently the U.S.' main ally in the region. That is why this operation is also limiting the U.S.' role in Syria.

Taken with the recent escalation in Ukraine, it is obvious that Russia has made the decision to impose its will in all negotiation tables through military power. The thing is Russia is trying to conduct the negotiations exclusively on the interstate level, while the U.S. is still trying to use non-state actors, such as the armed groups in Syria, as bargaining chips. This is risky for both the U.S. and Turkey, especially when Russia is making it clear that it will not allow any armed groups to play a significant role in Syria's future.

That is the reason why the Aleppo strikes cannot be seen only as a limited military operation. It was a comprehensive message addressed, not to Turkey, but to a number of other involved countries.