Would the yellow vests prefer Trump? 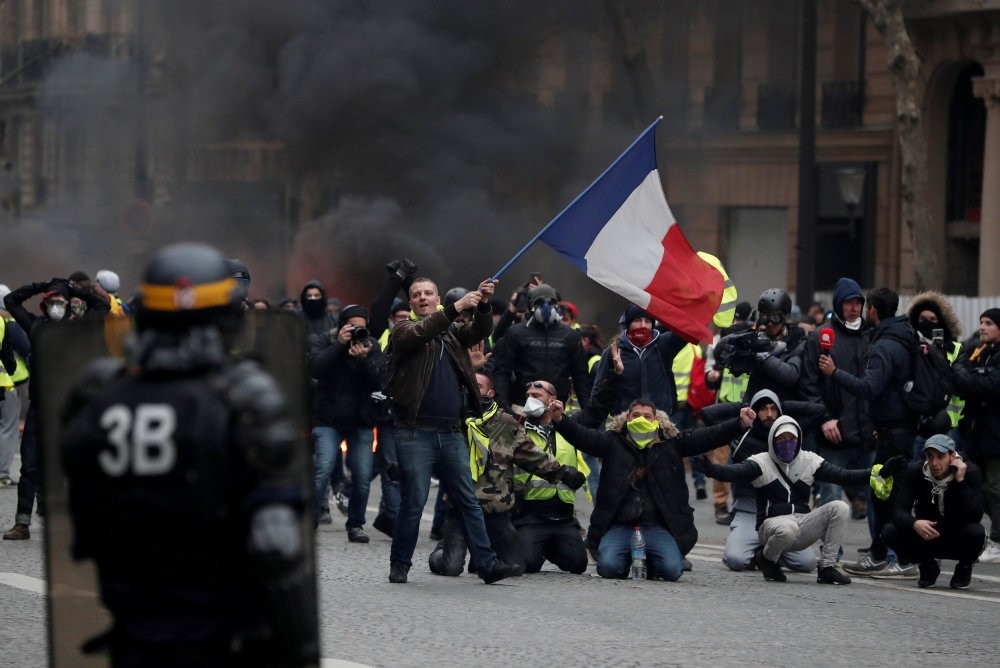 A protester waves a French flag during clashes with police at a demonstration by the ,yellow vests, movement in Paris, Dec. 8.
by Beril Dedeoğlu Dec 11, 2018 12:00 am

Trump thinks that what is going on in France is justifying his position, yet he should be aware that the 'yellow vests' may create waves that could hit many other countries around the world, including the U.S.

France has been facing some turbulent days. French demonstrators are targeting President Emmanuel Macron personally for their grievances, even though he is not really the one to blame for the current situation in the country. He simply attempted to manage a situation created by his predecessors. It is obvious that France's current problems are the result of a decade of mismanagement.

Many French politicians are to blame for today's problems. Macron was not president when France did not notice that the European Union had become a tool that only serves Germany's interests, when the German economy was growing, while France stagnated. Those who accepted everything German Chancellor Angela Merkel requested are the ones to blame. When France's socioeconomic problems became too big to resolve, old politicians stepped back and allowed a young, unexperienced politician, a former banker, to bear all the responsibility. Macron did not create the structural problems that pushed the French people into the streets, but now he is the one who has to deal with them.

France has been used by its European partners for a long time. For example, the idea of blocking Turkey's accession process to the EU by proposing a "privileged partnership" instead of full membership was the idea of German conservatives. Because of them, France had a very tense relationship with Turkey for years. Germany is the one who will benefit most from Brexit, but everyone has the impression that France is the happiest country to see the Brits leave. The European army idea was proposed by the French, even though it was not a French idea originally.

And now U.S. President Donald Trump is attacking Macron because he believes the French have become Europe's weakest link. He is also using France's situation for electoral purposes in the U.S. Trump seems to enjoy the fact that thousands of people are demonstrating in the streets of Paris, building barricades and when the police have a hard time controlling the situation. The French government is in a very difficult position, indeed, because they do not know how to deal with the current unrest. In the meantime, Trump is sending tweet after tweet, mocking the French president. Recently he said, "The Paris Agreement is not working out so well for Paris. Protests and riots all over France. People do not want to pay large sums of money in order to protect the environment. They chant We Want Trump. Love France."

We know that Trump hates everything about the environment. Now, he thinks that what is going on in France is justifying his position. The worse thing is he believes he is the one who knows what is good for France and that French people adore him. Perhaps he is already aware he is not going to be reelected in the U.S. and so he's trying to become president in France, who knows?

It is sad that the president of the United States is making fun of an ally when the latter is struggling. He also reiterated how the European army is an impossible idea, as he says Europeans will never find enough money to finance such an initiative.

Trump is probably right about the European army, as no EU country is willing to spend colossal sums of money to build a united military force. The problem is his attitude will only serve conspiracy theorists accusing the U.S. of being behind the current French troubles. He is willingly reinforcing this perception.

It is quite odd that he is provoking more demonstrations instead of standing with his allies. The point is, France has always been an inspiration to the world, and nobody knows where the "yellow vest" movement will stop. The protests can create waves that could hit many other countries around the world, including the United States.

When the French people offered the Statue of Liberty to the American people back in 1886, they believed, or they hoped, the two nations shared common values. Trump despises everything this monument symbolizes. He may be very wrong, though, if he thinks the yellow vest movement will never reach the United States.