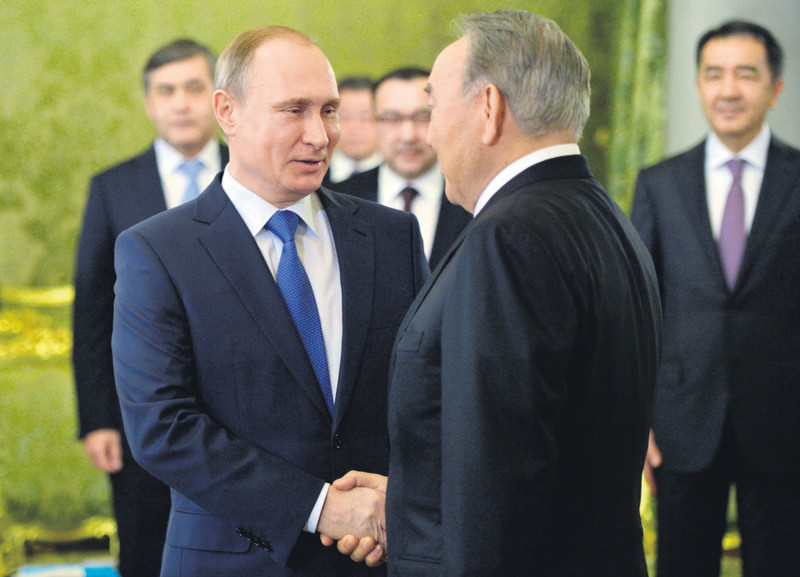 by Cemil Ertem Dec 23, 2015 12:00 am
The EU and Kazakhstan signed an Enhanced Partnership and Cooperation Agreement early this week. Even though it seems normal for the EU to sign trade agreements like this with a non-EU country at first glance, the question of debate changes when this country is Kazakhstan, which is in a customs union with Russia and is the key member of Russia's Eurasian union project. Following the fighter jet crisis with Turkey, Russian President Vladimir Putin started to readdress relations with countries that have kinship ties to Turkey such as Azerbaijan, Turkmenistan and Kazakhstan. Putin's visit to meet Kazakh President Nursultan Nazarbayev to reaffirm confidence was followed by a trade agreement between the EU and Kazakhstan. Indeed, this agreement was implicitly inked between the EU and Russia, which will firstly reconsolidate the old Soviet region and then improve relations with the EU to achieve a Eurasian union. In this way, it will confront the EU not as a single country, but as a union and show that this union is an alternative to the EU in the Caucasus. Furthermore, it will prevent the EU from expanding toward its east through Turkey and discourage countries like Ukraine and Georgia, who will want to be EU members over time, from joining the union by convincing them that the Eurasian union will make any kind of agreements with the EU on behalf of each of these countries. This strategy will also help Russia maintain its tension politics. While Eurasian union countries make all kinds of trade agreements with the EU, Russia can intimidate the EU. However, it is questionable whether this "oriental slyness" will find a remedy to Putin's economy, which is increasingly stuck. This is because Russia is obviously going through a crisis as basic commodity prices, particularly oil, consistently tumble.

The nine-month data reveals that the number of unemployed people in Russia has soared by 2.3 million to 18 million and this figure is expected to reach 20 million by the end of the year. The unemployment rate has increased by 0.9 percent and nearly 480,000 people have become unemployed in the country over the past week. As the Russian ruble has decreased in value, the average salary range has dropped to between $500 and $600 from between $1,000 and $1,200. Russia could maintain its social balance by paying 3,700 rubles ($52) for per capita from the state budget in a macroeconomic balance where oil prices hovered around $55. However now it has entered a public bankruptcy period as oil prices push $30. This constitutes the economic basis for embargoes that it inflicts upon Turkey. Putin thinks he will urge the Russian people to spend less thanks to these embargoes and will lay the burden of this on Turkey. When one dollar becomes equal to 100 rubles, we will be witnessing a new dynamic that will also change political balances in Russia. While talking about the 2016 budget last week, Russian Finance Minister Anton Siluanov said that the Russian economic administration expected oil prices to be around $50. He stated that if oil prices were around $40, this would not be enough for the budget and announced that the government would revise the budget in spring 2016. He said, "I need to announce that 2016 will be worse than the present situation."

Russia is laying all kinds of obstacles in front of Turkish investors in the country. However, it seems that Putin hurts his own economy and power by doing so. And he cannot expand the Eurasian union by pursuing this kind of understanding and strategy. It appears Caspian countries will further embrace their resources and independence. An assertive project like the Eurasian union cannot expand through annexations under puppet administrations. In these circumstances, the Eurasian union cannot go beyond Belarus and Kazakhstan. How Russia keeps these countries together is a topic of another discussion. Apart from all this, if the EU wants to object to Russia's annexationist politics in a sincere manner, it should abandon the double game. If the EU can pursue a true expansion policy, it can minimize its energy dependency on Russia.

Russia cannot move on its path forever by exporting oil and establishing oil oligopolies and monopolies. This also runs against the EU's understanding of a union. Furthermore, Putin's Russia cannot continue as a self-enclosed and autarchic economy. The Russian economy cannot survive forever with a development model that is called the Dutch disease in economic terminology and which signifies growth based on a single commodity and energy. We are entering the years where carbon-based energy will run out at a geometrical rate and its economic value will drop. This being the case, Russia's attempts to produce new politics and a Eurasian union through this economic reality is a bad political strategy and perspective that will hit the wall.

Turkey is taking major steps to disturb this understanding. Rather than the fighter jet crisis, this is actually what drove a wedge between Turkey and Russia. Turkey has taken two major steps in energy. The first one connected Caspian and Iraqi energy lines to the Southern Gas Corridor (SGC) and carry them to Europe. This step not only concerns energy, but also upgrades Turkey's position to price out energy. Turkey's energy stock market, which will be established soon, will also include natural gas. Turkey is becoming a country that can disturb Russia's natural gas and energy monopoly in the Caucasus and Europe in terms of price and supply.

However, these steps will serve Russia's purpose in the medium run. Russia cannot evaluate its major industrial potential that dates back to the Soviet period. The oligarchs of Putin's Russia plundered this historic asset and failed to turn this value into an export-capable industry. The current stalemate offers such an opportunity for Russia. However, the crises that Russia experienced with Crimea and Turkey show that Putin has come to an end. Just like Israel, Russia has to come to terms with Turkey. Otherwise, it cannot find a way out.
Last Update: Dec 23, 2015 1:44 pm
RELATED TOPICS