Turkey's take on the Riyadh-Tehran rivalry 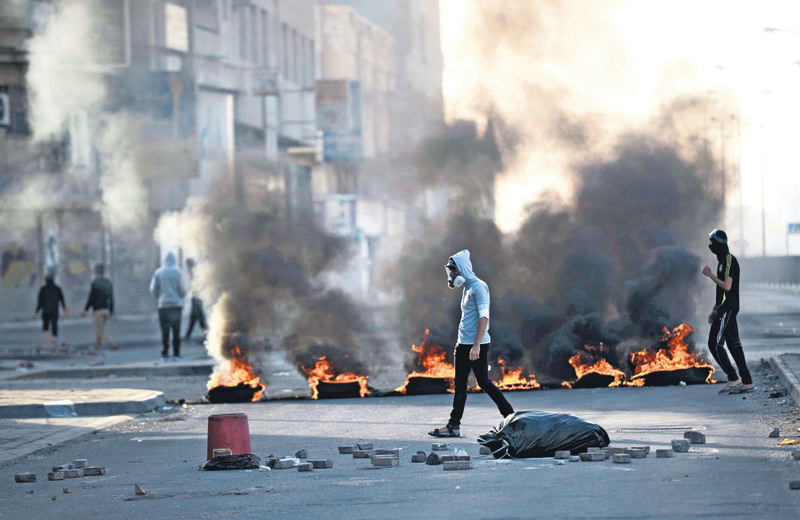 Bahraini protesters walking amid burning tyres during the clashes with riot police, following a protest against the execution of prominent Shiite cleric Nimr al-Nimr by Saudi authorities.
by Burhanettin Duran Jan 11, 2016 12:00 am

Although Ankara highlights the significance of not being a part of a sectarian war to avoid increasing ideological polarization in the Middle East, it stands closer to Riyadh than Tehran

The growing tensions between Saudi Arabia and Iran could potentially reshape the Middle East. When observers, fearing the rivalry might spark new conflicts in the region, turn to Washington, they keep getting the same answer that regional powers must take initiative for a new regional order to emerge.

According to U.S. officials, regional powers need to play a more prominent role in a range of areas, including the Syrian civil war, the anti-DAESH campaign and preventing sectarian clashes. Russia, in turn, seeks to rescue the Syrian regime by siding with Iran and facilitating Shiite expansionism. Against the backdrop of major developments in the Middle East, it is important to figure out what Turkey, another regional power, needs to do.

When the Arab Spring revolutions began to topple authoritarian regimes across the Middle East and North Africa, Ankara tried to accomplish two goals. One, it called on the United States to take initiative in conflict zones, including Syria, and stand in solidarity with the people, and at the same time, it tried to promote cooperation between regional powers such as Iran, Egypt and Saudi Arabia. Fearing that a Saudi-Iranian rivalry would have an overall negative influence on the region by weakening nation-states, strengthening radical groups and triggering sectarian clashes, Ankara sought to work with Egypt to counterbalance the growing tension between Riyadh and Tehran.

In retrospect, Ankara's plan did not work out.

While Iran worked against pro-democracy forces in Syria, Riyadh sided with the authoritarian regime in Egypt. To be clear, Saudi Arabia made a terrible mistake by helping General Abdel-Fattah el-Sissi overthrow Mohammed Morsi, Egypt's first democratically elected president, and later become president himself. Iranian expansionism, however, was an even bigger mistake. Currently, Iran and Saudi Arabia find themselves walking a fine line between proxy war and direct military confrontation.

Fully aware that Saudi Arabia and Iran are unlikely to agree on a shared vision for the Middle East, Ankara remains concerned that the rivalry between the two regional powers will lead to sectarian clashes. As such, leaders in Turkey have been calling on both sides to act reasonably in an effort to create an alternative to Shiite-Wahhabi polarization. Speaking to reporters earlier this month, President Recep Tayyip Erdoğan stayed on message: "I always tell the Iranians that we need to think Islamic-Islamic as opposed to Sunni-Shiite."

The execution of Shiite cleric Sheikh Nimr al-Nimr in Saudi Arabia, however, led to more questions about Turkey's take on the Saudi-Iranian rivalry.

Erdoğan, in contrast, made the point that many governments, including Iran, had not abolished the death penalty. "What happens in Saudi Arabia is a question of domestic law. This is their decision whether we approve of it or not," he told a group of neighborhood headmen visiting the Presidential Palace - a comment, some observers argued, that indicated Turkey had sided with Riyadh.

In the broader scheme of things, the Turkish government believes that Iran went too far by supporting Shiite militants in Syria and Yemen. At the same time, there is a real concern that the Gulf will destabilize if Saudi Arabia starts looking like a failed state. Obviously, it is important to note that Ankara and Riyadh see eye-to-eye on Syria and have recently signed important defense and energy cooperation agreements. However, it is extremely unlikely for Turkey to stand with Saudi Arabia in a battle for regional hegemony intended to move beyond keeping a lid on Iranian greed. The claim that Turkey would commit troops to the effort is even more likely provided that the country, which has refused to be directly involved in the Syrian civil war, would risk being dragged into the multiple conflicts across the Middle East.

Simply put, Ankara has taken a stand against ideologically charged and polarizing rhetoric in an effort to de-escalate the crisis. In a range of issues, including defense cooperation and the Syrian civil war, however, Ankara's position is closer to Riyadh than Tehran.
RELATED TOPICS