The United States' offer to Erdoğan 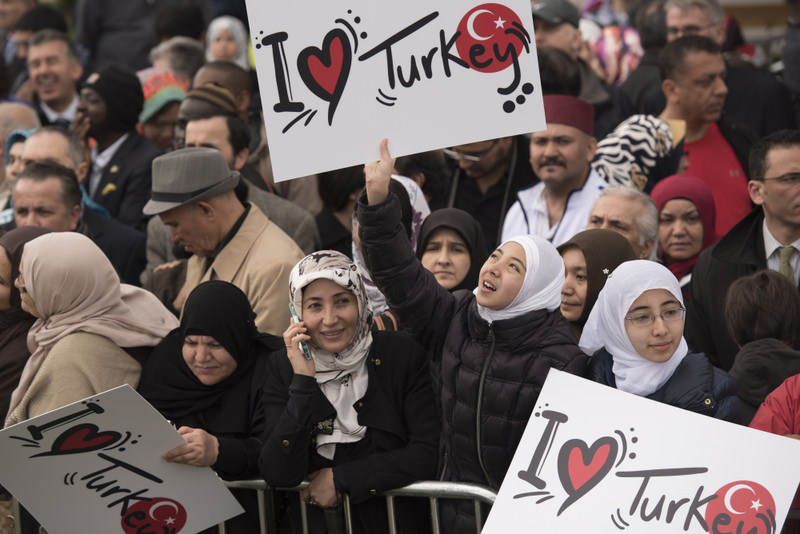 As the counterterror fight is the first priority for Turkey, the U.S. authorities' tangible solution offered to Erdoğan can mark a good start in putting bilateral relations back on track

The perpetual topic of the meetings President Recep Tayyip Erdoğan attended during his Washington visit has been the fight against the PKK and DAESH terrorist organizations.

Turkey has consistently reminded the U.S. and European public that cooperation in the counterterror fight would serve joint interests by underlining the requirements of an alliance, using critical language when necessary.

Despite the accusations of authoritarianism covered by the U.S. media and the protests by the proponents of the PKK, the parallel structure or other anti-Turkey lobbies in Washington, the diplomacy was about real subject matter.

Even though the controversies caused by the presidential elections are highly visible, tangible policies and rational calculations stand out in Washington. As real interests correspond to fighting against the PKK and its Syrian wing the Democratic Union Party (PYD) in Turkey, the need to provide another development in the fight against DAESH is the prior real interest from the U.S.

While Turkey is victimizing its citizens to terrorism each day due to the PKK's attacks, the U.S. public is very sensitive to the DAESH threat due to Donald Trump's presidential campaign, which manipulates fear. Therefore, even though other topics including Turkey-Israel relations and the Cyprus issue have also been on the agenda during the talks in Washington, the critical subjects have been the eradication of DAESH from the 92 kilometer Azaz-Jarabulus line and the PKK's regional position and future.

It is not sufficient for the U.S. to mention the integrity of Syria and its unwillingness to see a Kurdish state. Turkey has been questioning the indistinguishable characters of the PKK and the PYD and the future of the Manbij region, where the U.S. air operations are launched. The country also demands handing control of the region to the moderate opposition rather than the PYD and its armed unit, namely the People's Protection Units (YPG). Within this scope, it calls on the U.S. to provide air support to the moderate opponent groups.

U.S. institutions having a role in the Syrian case is said to compete with each other. Due to the priority of the anti-DAESH fight, the Pentagon is highly influential in shaping the viewpoint of the White House, while the Foreign Affairs Department is in a more symbolic position in the process. The CIA, which deals with operations towards Bashar Assad; however, cannot have the influence it wishes to have, although it agrees with Turkey on the future of the Azaz-Jarablous line. Also, even though the U.S. authorities assert that they support Arabs within the Syrian Democratic Forces instead of the PYD, it is pointed out as a counter argument that the PKK has turned northern Syria into a training and ammunition field through the PYD and the YPG. There is also a tangible data that the PKK suicide bombers have been trained under the control of the PYD and the YPG.

A formula needs to be found regarding how the control of the Azaz-Jarabulus line will be shaped and which groups will be influential in the region. Turkey and the U.S. could agree on the Syrian matter alone if such a formula is developed. The U.S. had formed the Syrian Democratic Forces by uniting the PYD, the YPG and some Arab tribes. The main aim was to discard Turkey's criticisms about backing the PKK, but it only provided the PKK with aspirations and legitimacy.

The Arab tribes close to the U.S. and the moderate opponent groups close to Turkey can be drawn together within this scope. DAESH can be eradicated from the region by providing air support to this new formation. It is essential for the U.S. to take some steps that would soothe Turkey's concerns over the YPG during the process.

Otherwise, the Justice and Development Party (AK Party) government, which has major popular support in the anti-PKK fight, might be obliged to shell the YPG targets. Like the T-155 Fırtına howitzers that hit DAESH positions before, they might target the YPG this time, which is seriously considered an option. This alternative can stand out even more if Turkey and Russia break the ice in the near future.

The reconciliation process will not be reinitiated unless the PKK tangibly feels that it does not have any other choice.

As the counterterror fight is the first priority for Turkey, the U.S. authorities' tangible solution offered to Erdoğan can mark a good start in putting bilateral relations back on track.

Unfortunately, "the role of uniting the East and the West" Obama hoped for Turkey could not be carried out in terms of spreading democracy. Some pro-status-quo forces such as Saudi Arabia turned the Arab Spring into a winter, while the U.S., to put it in the mildest way, acted as a mere spectator in the case. During this period, in which Syria and Iraq has turned into regions that "create terrorists," Turkey might take on a role that will unite the East and the West in joint action for the anti-terror fight, as it is clear that Turkey is the country most aggrieved by the PKK and DAESH terror emerging from the both countries.

The international cooperation Erdoğan puts forwards is urgently needed in order to prevent probable losses the terrorism wave would cause in Europe.

It is high time for the Obama government to focus on the realities of the field by putting to one side the fatigue in bilateral relations and the controversies between the institutions.

Burhanettin Duran is General Coordinator of SETA Foundation and a professor at Ibn Haldun University. He is also a member of Turkish Presidency Security and Foreign Policies Council.
Last Update: Apr 04, 2016 1:21 am
RELATED TOPICS