Renewed dialogue with PKK in Turkey? 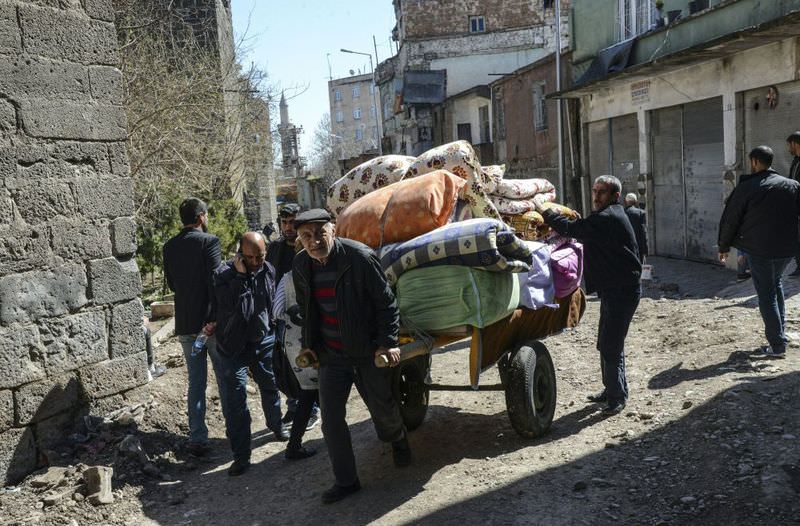 People carry their belongings on a cart as they return to their homes after clashes ended in the Sur district of Diyarbaku0131r in southeast Turkey.
by Burhanettin Duran Apr 09, 2016 12:00 am

Calling for renewed talks may be tempting, but it has little meaning until Turkey removes PKK militants from the southeast and the international community draws up a plan to facilitate political transition in Syria

Fighting terrorism represents a serious challenge for democracies around the world. Turkey, which has been combating extremism for decades, faces a new kind of threat today.

When faced with pressing problems, people in Turkey and elsewhere like to invoke the argument that their country has certain unique circumstances, which inevitably dumbs down the policy debate. Turning a blind eye to real-world factors, however, often proves equally problematic. Without a proper analysis of the facts, it is nearly impossible for governments to decide when to fight terrorists and when to pursue dialogue.

Currently, a number of groups, including the Peoples' Democratic Party (HDP), the PKK's political wing, and the Gülen Movement, are desperately calling on the government to revive disarmament talks with the PKK.

The proposal to re-initiate talks, however, has a number of shortcomings.

First of all, advocates of dialogue ignore that major changes have happened since then Prime Minister Recep Tayyip Erdoğan launched the reconciliation process with the PKK. At a time when the PKK's Syrian affiliate Democratic Union Party (PYD) seeks to carve out part of Syria under the pretext of fighting DAESH, PKK militants in Turkey will not settle for stronger local governments. Instead, they are pushing for a pan-Kurdish confederation that cuts across national borders.

To make matters worse, the PKK leadership has been receiving support from multiple countries in return for distracting Turkey from historic developments taking place in Syria and Iraq.

The Syrian civil war has also transformed the nature of threats to Turkey's national security. At this time, three terrorist organizations with diverse backgrounds - DAESH, the PKK and the Revolutionary People's Liberation Party Front (DHKP-C) - are openly challenging the country. In recent months, DAESH and the PKK have been exploiting each other's attacks to radicalize their bases by employing Salafist-messianic and Islamophobic-secularist-ethnic rhetoric, respectively. Both groups, moreover, have been relying on their quasi-states across the southern border for recruits and funds. In light of the most recent developments, it is virtually impossible to talk the PKK leadership into renewed dialogue until Turkey and its allies have a clear road map to defeat DAESH.

During the Cold War, Western nations often relied on terrorist organizations they called freedom fighters to weaken their opponents. For the first time in history, though, the United States, Russia and Iran - countries with different goals in Syria - are simultaneously supporting an armed group whose members in Turkey constitute a globally recognized terrorist organization while the Syrian wing pretends to fight DAESH.Washington's partnership with the PYD has been extremely useful for U.S. President Barack Obama's administration. But outsourcing the counter-DAESH campaign to a terrorist organization has had devastating results in Turkey. Right now, the United States has no problem working with Ankara against the PKK while openly supporting the PYD across the southern border. Turning a blind eye to the facts on the ground, U.S. officials have repeatedly offered to facilitate talks between Turkey and the PKK leadership. Hence President Erdoğan's emphasis on the PKK-PYD connection.

Calling for renewed talks may be tempting, but it has little meaning until Turkey removes PKK militants from the southeast and the international community draws up a plan to facilitate political transition in Syria, which, by extension, will take away the PKK and PYD's carte blanche. If anything, a new round of talks right now would only serve U.S. interests and give the PKK leadership an opportunity to lick their wounds. Earlier this week, Erdoğan made it clear that "there is nothing to negotiate or talk about." Moving forward, though, the Turkish government must take necessary steps to rebuild town centers affected by the conflict and communicate more effectively with local communities.

In recent years, the PKK leadership twice walked out of negotiations, proving themselves to be completely unreliable. Although they have no future in Turkey, Kurdish nationalists are still entitled to engage in political activities and contribute to the political process. Until the situation in Syria improves and the PKK in Turkey is obliterated, there can be no dialogue.