What does the US really want? 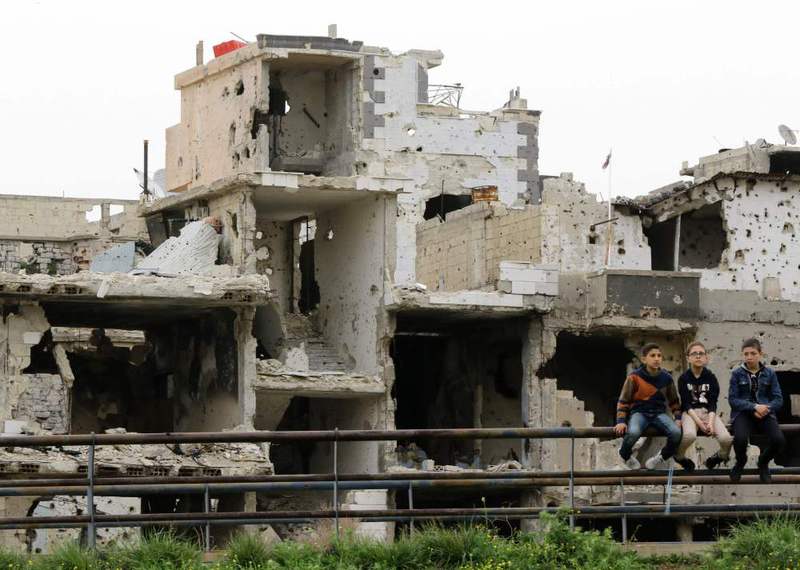 Displaced young Syrian boys siting on a railing in front of heavily damaged buildings in the central Syrian city of Homs
by Burhanettin Duran Apr 12, 2016 12:00 am

The U.S. must give up its 'saving the day-policy' and realize the long-term importance of engaging in Turkey's fight against the PKK's Syrian branch PYD

Against the backdrop of Geneva peace talks, Turkey and the United States are engaging in a heated debate about liberating the Jarablous-Azaz line across the Turkish-Syrian border from DAESH.

With the U.S. backed Syrian Democratic Forces, led by the Democratic Union Party (PYD), seeking to cross the Euphrates and force DAESH out of Manbij, President Recep Tayyip Erdogan discussed Washington's ties with the PKK/PYD and their plans for Northern Syria with U.S. President Barack Obama, Vice President Joe Biden and Secretary of State John Kerry.

During the talks in Washington, the Obama administration pledged to work more closely with Turkey on counter-PKK efforts but remained committed to assisting the PYD in Syria. Turkey, in turn, proposed a plan to create a 2,400-strong force to fight DAESH that would include Türkmen and Arab troops currently fighting among Syrian Democratic Forces (SDF) ranks as well as groups affiliated with the Free Syrian Army.

According to sources, part of the discussion involved the Obama administration's offer to facilitate talks between Turkey and the PKK leadership, which the Turkish delegation promptly declined. Having failed to reach an agreement on a number of issues, Turkish and American leaders shook hands on a U.S. delegation traveling to Ankara April 4-5 to finalize talks.

Around the same time, U.S. Ambassador John Bass told a group of diplomatic correspondents that his government did not provide weapons and ammunition to the People's Protection Units (YPG) and claimed that the U.S.-made weapons, which Turkey discovered in PKK stocks, originated from the Iraqi arsenal. He added that the U.S. paid attention to Turkey's concerns about a PYD-controlled stretch across the southern border.

Despite the ambassador's statement, however, it's quite clear that the PYD-YPG, which has been serving as Washington's ground force in Syria, wants to unite the Afrin and Kobani cantons. Washington only seeks to find a middle ground between Turkey's demands and the PYD-YPG's plans by making sure that Tırkmen and Arab fighters affiliated with the Free Syrian Army control a 20-kilometer-deep stretch of land between Azaz and Jarablous. If the plan works, Turkey will border a de facto safe zone under rebel control, which would prevent DAESH militants from crossing national borders and make it possible for refugees to be kept in Syria.

However, the U.S. proposal would allow the SDF to seize control of a large area between Manbij and Tal Rifat and the unification of PYD-controlled territories. The main downside would be Turkey losing access to rebel-held Aleppo and the creation of a PYD-controlled buffer zone between Syrian Arabs and Turkey.

To make matters worse, the U.S. government will have no choice but to prove Ambassador Bass wrong by assisting the PYD in the battle of Manbij. According to media reports, the U.S. has already started shipping military cargo to YPG forces in northeast Hasakah. Meanwhile, the Obama administration is considering allocating a $250 million budget approved by Congress to train and equip efforts for YPG forces. Moving forward, the Obama administration might come up with new ways of assisting the PKK's Syrian franchise and putting additional strains on Turkey-U.S. relations.

It would appear that the Obama administration is contemplating two additional steps at this time: First, the U.S. will mount pressure on the PKK leadership to cease attacks against Turkey. Moreover, the administration will take the necessary steps to ensure that Turkey won't attack PYD-controlled territories in northern Syria. In doing so, the U.S. will send a message to PKK-PYD fighters to focus on creating an entity in Syria and leave Turkey alone for a while. In the short run, there is no reason why PKK leaders, who have been calling on Washington to serve as a third eye in disarmament talks, shouldn't accept the Obama administration's offer. Turkey, on the other hand, has no interest in U.S.-facilitated talks.

Any plan that would strengthen the PYD's position in northern Syria will fuel Turkey's concerns for the foreseeable future. In light of Turkey's clear stance, the U.S. must stop wasting time on short-term, cosmetic efforts and engage in an actual conversation with Turkey.