Gezi and Paris: What goes around, comes around 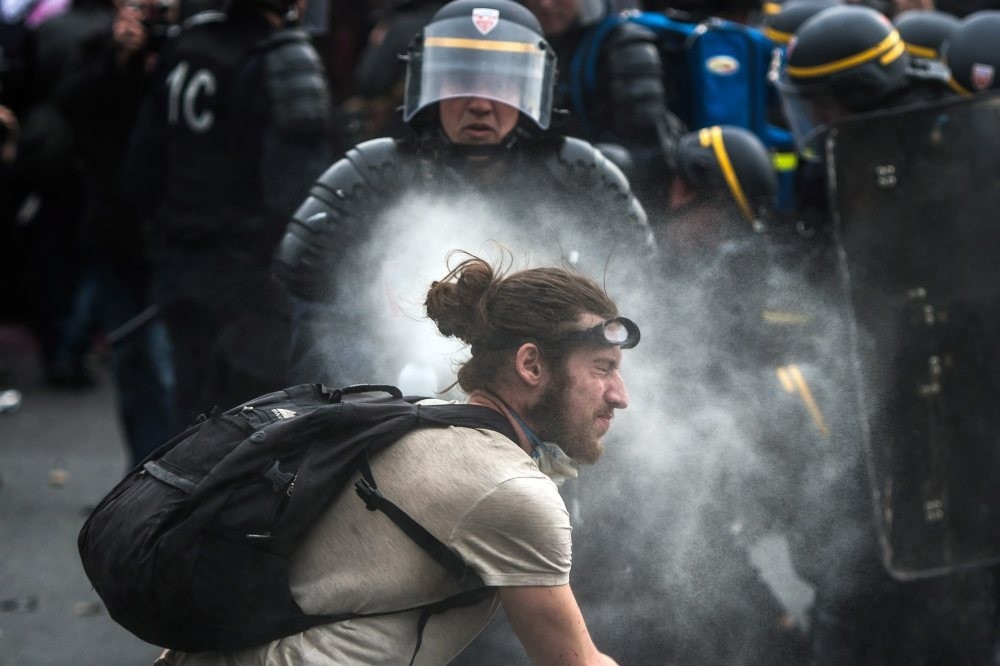 French police using tear gas against a demonstrator during a protest against the government's labor market reforms, at Place de la Nation, in Paris, May 26, 2016.
by Burhanettin Duran Jun 01, 2016 12:00 am

The French labor unions are on the streets of Paris, on the anniversary of the Gezi Park protests in Turkey, protesting President François Hollande's controversial infringements on labor rights

The Gezi Park protests, which started out as a peaceful demonstration against an urban development project and quickly evolved into a violent effort to topple Turkey's democratically elected government, have an important place in contemporary Turkish politics.

Many protesters, who said they were sick and tired of the Justice and Development Party (AK Party) government, called for then-Prime Minister Recep Tayyip Erdoğan's resignation. The government, they claimed, had taken an authoritarian turn. At the same time, they were notably frustrated with the opposition parties, whom they considered ineffective and out of touch. Over-confident and angry, the protesters were engaged in violence and hate speech within days.

Three years ago, social scientists proclaimed the birth of a new and democratic movement in Turkey. Public squares and the streets were part and parcel of a functioning democracy, they argued, turning a blind eye to the Molotov cocktails in Taksim and angry chants on Baghdad Street.

In the end, the Gezi Park protests failed to kick off a new and democratic popular movement in Turkey. Instead, they deepened the opposition's existential crisis by leaving the government's critics more vulnerable to fear, hate and anxiety. What came out of the protests wasn't a new way of doing politics but a political discourse keen to blame everything on the AK Party government - which, in turn, made rational opposition impossible. Ironically, their dependence on anti-government and anti-Erdoğan sentiments only consolidated their position in opposition.

To be clear, the opposition's empty rhetoric about authoritarianism and one-man rule has little effect on the Turkish people. Surely enough, though, such views are quite popular in Western capitals. As the European press talks about the "sultan" in Ankara, Western politicians take turns to express their concerns about Turkey's counter-terrorism policy, parliamentary immunities and other issues.

During the Gezi Park protests, the state of assembly rights in Turkey seemed to keep European leaders up at night. Nowadays, they're worried sick about press freedom. Today, the Turkish people are trying to figure out why the European Union has nothing to say about the crackdown on thousands of peaceful protesters in Paris and Brussels.

Today, the French labor unions are on the streets of Paris, on the anniversary of the Gezi Park protests in Turkey, protesting President François Hollande's controversial infringements on labor rights. Quite understandably, they are opposing the government's efforts to make it easier for employers to fire workers and introducing new limits to settlement packages. For the record, neither the European press nor Western politicians are concerned about police brutality.

When protesters throw homemade explosives at them, the police show them the limits of democratic protest - never mind the fact that the limits seem to have radically shrunk since the Gezi Park protests.

Earlier this week, President Erdoğan made a statement about police brutality in Europe, with which many Turks agreed: "I am concerned about what has been happening in Paris. TV channels, which were based in Istanbul three years ago to broadcast [the protests] live, have been blind, deaf and mute. I condemn the French police's violence against people who exercise their right to protest."

Burhanettin Duran is General Coordinator of SETA Foundation and a professor at Ibn Haldun University. He is also a member of Turkish Presidency Security and Foreign Policies Council.
Last Update: Jun 01, 2016 2:43 am
RELATED TOPICS